Peugeot will certainly have its work cut out when it comes to replacing the pretty 306 Cabriolet. It's difficult to see a 307-based open car replicating its success, based as it is around such a high and narrow platform. It's almost as if the 306 was made to be decapitated, resulting in this Pininfarina-styled cabrio that's way more elegant than it ever had any right to be. Used examples are fairly numerous and picking up a good one shouldn't be too tricky.

Peugeot's pretty 306 cabriolet arrived in May 1994 powered by a 123bhp 2.0-litre engine. In April 1997, the range was facelifted, with a smart new nose, mild alterations at the rear and extra equipment. ABS became standard on all models in autumn 1998 and the last round of revisions (body-coloured bumpers across the range along with twin front airbags and anti-lock brakes) was announced in June 1999. At the same time a 1.8-litre version was announced with a 112bhp engine. May 2000 saw the 2.0-litre model discontinued, with a 1.6-litre 100bhp automatic version arriving in December of the same year. 2001 model year changes saw the 1.8-litre car being fitted with 15-inch Cyclone alloy wheels. The shape has aged well, the neat looks surviving well into the Peugeot 307 era, finally slipping from the line up in early 2003.

What You Getword count: 193

Pininfarina and Peugeot have produced some mighty stylish creations in the past, but arguably none as stunning as the 306 Cabriolet. After all, if image and rarity aren't among your priorities in buying an affordable cabrio, the other main consideration is likely to be that of affordable practicality. Realistically, since you'll be spending more time with the top up than down, the ease of operation of the hood mechanism and both sound and noise insulation need to be excellent. In this 306 Cabrio, they are - and the convertible operation is simplicity itself. Thanks to the standard electric mechanism, you simply unclip, push the button and sit back to enjoy the spectacle as the metal cover behind you rises to swallow the hood, then falls cleanly on top of it. It may be worth ringing a few vendors to try to find a car with the optional Pininfarina-styled hard top. This is lined to reduce noise intrusion, has a heated glass rear window and is finished in the same body colour as the car. It can be removed easily for simple storage, transforming your 306 back from Coupe to Cabriolet at a stroke. 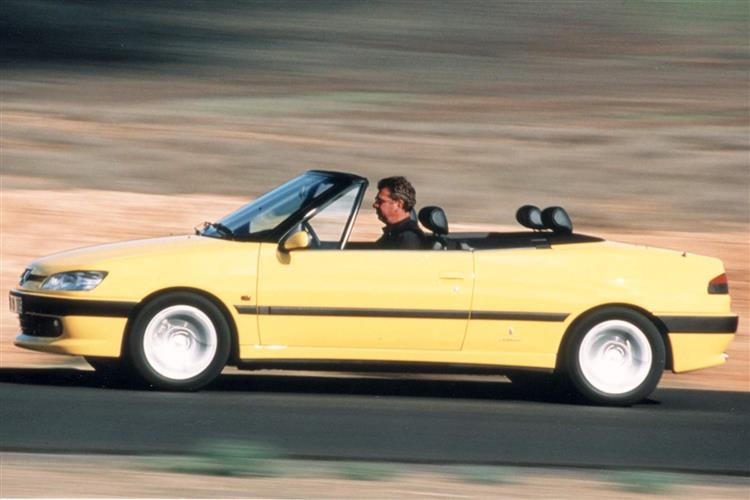