REVERTING TO HYPE? (some text hidden)

Few cars have built up quite such a mantle of invincibility as Nissan's Skyline GT-R. Founded on saloon car racing dominance, almost implausible lap times of the N??rburgring and an underground following that translated into unquenchable public demand here in the UK, the Skyline has created its own legends. Although the torch is now carried by the R35 GT-R, a car that has dispensed with the Skyline badge, the last of the Skyline GT-R models, the R34, remains the definitive Playstation generation car. As a used proposition, is it worth the money or is its price buoyed by a hefty bubble of hype? Here's the knowledge.

To those in the know, there are three generations of Skyline GT-R that really mater. Although the Skyline was first sold way back in 1969, Year Zero for most fans came in 1989 when the GT-R R32 was launched. This car crushed all opposition in the 1990 Japanese Touring Car Championship, winning 29 of 29 races. The legend was born. The key date for UK buyers was 1997, when UK imports of its successor, the Skyline GT-R R33, began. Although subsequent information has cast doubt on the veracity of that car's sub-8 minute N??rburgring lap time, here at last was a car that British buyers could buy from a Nissan dealer with a warranty. But not for long. In 1999, the Skyline GT-R R34 weighed in, available through only one authorised Nissan dealer, Middlehurst Nissan in St. Helens. With even more high-tech features than before, the R34 Skyline sold in modest numbers and was finally phased out in 2002, the 350Z sating the appetite of Nissan performance enthusiasts until the R35 GT-R arrived with its own stock of jaw-dropping feats performed on that snaking piece of tarmac through the Eifel mountains.

Part of the appeal of the Skyline GT-R was that despite being rapid and eminently tuneable to go even faster, it nevertheless had seating for four, a fairly decent sized boot and was sufficiently untemperamental that you could use it every day. Four-wheel drive gave it all-weather capability - handy in this damp and pleasant land - and our V-Spec models were also equipped with ATTESSA-ETS-PRO, a system which switched drive to whichever of the four wheels most needed it, correcting the car if it skidded from its intended line. When developing the R34, Nissan's engineers took on board criticisms that the interior was a little undramatic for a car costing over £50,000 and fitted one of the most diverting features ever to grace a car's dashboard. The multi-function display could relay all manner of virtually useless information such as turbo rpm, exhaust manifold temperature and so on but the g-meter was the really fun toy. Yes, your internal organs and inner ear would tell you whether you were accelerating, decelerating or cornering, but seeing a little ball veering all over the display as you lurched from lock to lock was strangely compelling. The fit and finish of the R34 isn't bad, with brushed aluminium effect trim and, on UK cars at least, Connolly leather upholstery. There's also a six-speed Getrag close ratio gearbox and some great styling parts. The front and rear spoilers are huge, the eighteen inch wheels and Brembo brakes eyecatching, and the signature colour is Bayside Blue. 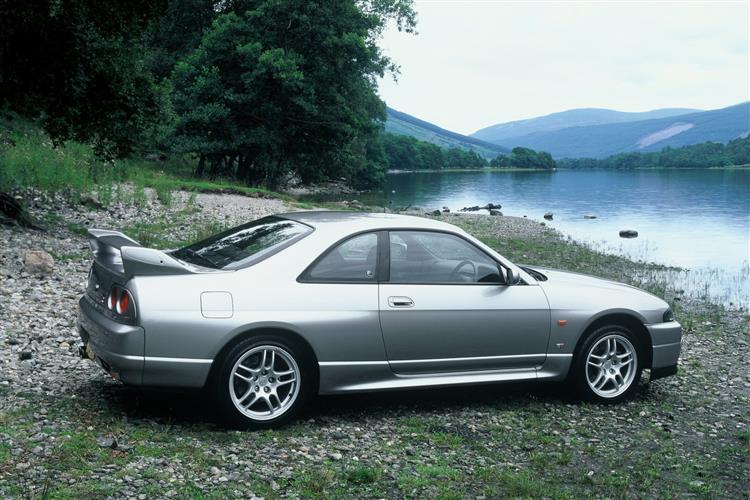