NO NEED FOR THE HARD SELL (some text hidden)

Delivering an opinion on a Mercedes C-Class saloon is easy. Lop the tail end off and call it a Sports Coupe and you're dealing with a whole different kettle of kippers. Whilst some lauded it as a stylish and affordable Mercedes, the spiritual heir to the VW Corrado and so on, there were others who sniffily deride it as neither Sporting nor a Coupe, offering a lot less than an equivalent C-Class saloon. That's perhaps a little harsh. The Sports Coupe has a lot going for it. Track down a decent used model and you'll soon see why.

Although it hasn't been around for too long, the C-Class Sports Coupe has already amassed a fair bit of history. When it was first launched in May 2001, the range consisted of a 129bhp 2.0-litre (the C180), a 163bhp 2.0-litre supercharged version (the C200K) and the range-topper, the 197bhp 2.3-litre supercharged C230K. The 143bhp C220CDi diesel model arrived the subsequent month, heralding a new diesel coupe sector into which manufacturers like Peugeot and Citroen quickly jumped. This line up lasted just over a year whereupon Mercedes adopted Twinpulse technology for its four cylinder petrol engines. The C180 was replaced by a 143bhp C180K, whilst the 163bhp C200K and the 192bhp C230K were familiar, in name at least. Under the bonnet all three engines were remarkably similar 1.8-litre supercharged units that offered better fuel economy and massively greener emissions capabilities than their predecessors. In early 2003 Mercedes opened the order books on the 214bhp C320 V6 model. A series of revisions were brought in across the C-Class line-up in Spring 2004 and the Sports Coupe got in on the act. The suspension pick up points were tweaked for better driver feedback, the width of the track grew by 18mm and the steering was made a good deal more direct. Clear lens headlamps, a re-shaped bumper and a radiator grille with three louvers were the main external changes. In the summer of 2005, a series of new models were introduced to the range. An entry-level C160 was perhaps the biggest shock. It arrived packing a 122bhp non-supercharged 1.8-litre engine. The C230K was axed in favour of a C230 with 2.5-litre V6 power and the range-topping C320 became a 272bhp C350.

What You Getword count: 620

No, those rakish looks really don't lie: this is a coupe, not a premium hatchback: the Stuttgart design department will have to try again on that score. And as a two-door, more dynamic-looking C-class saloon or an entry-level CLK wannabe, it makes a lot of sense. It's smaller than a CLK of course - but you won't really notice any difference unless you habitually sit in the back. Like the CLK, this car sits on a chassis borrowed from the new generation C-class saloon - which means that Mercedes has had to do what else it can to distance the two products. For a start, the Sports Coupe won't get V6 power or an AMG-engined derivative - though you get the feeling that this might change if the market demands it. There won't be a Sports Coupe convertible either - the CLK really will get to keep that market niche to itself. BMW and Saab - whose products can substantially undercut the CLK Cabriolet but would struggle against a Sports Coupe version - will be delighted to hear it. Not that Mercedes wants to totally ignore the affordable realms of the open-air coupe market. Buyers can also specify Panoramic twin glass sunroofs which extend from the windscreen to the top of the tailgate and slide electrically backwards and forwards. The designers hope that this will create a feeling of light and space - though not too much. To avoid creation of a greenhouse, the panels are smoked and two electrically operated roller blinds can slide across the glass to keep the cabin cool. When you do open up to let in the sunshine, you'll find that the aperture is a third larger than you'd get with a standard sunroof. This model might share the same platform, suspension and steering with its C-class saloon stablemate but in almost every other respect, the designers have been keen to differentiate the two cars. It's 20mm lower for a start - which could put headroom at a premium if you're loftily built. Despite the compact length (just 4343mm) and the reduced headroom for rear seat passengers, Mercedes still contend that this car is a genuine four-seater. They do however, admit that luggage space is necessarily down on what you could expect from the four-door model (falling from 455 to 310 litres). Still, you will be able to 50/50 split-fold the rear seats and in doing so, increase the capacity to some 1,100 litres. In the efforts to create that dynamic-looking low-slung shape, every body panel has been changed (though ironically, the shape of the saloon still proves more slippery in the wind tunnel). The lights have been restyled and that famous badge relocated on the front grille. In fact, the only exterior body parts shared are the windscreen wiper, the door handles and the mirrors. Probably the most notable styling cue is the kicked-up tail with its see-through lower glass panel, intended to create extra downforce for the rear axle. If it does, it's not worth the disadvantage created in the further impairing of already poor rearward vision. Inside, you'll find a fascia pretty much lifted straight from the saloon, though the instrument hood has been re-worked, a smaller steering wheel included and silver trim added in an attempt to imbue a more youthful image. Standard equipment includes a full complement of airbags, ABS, remote central locking and Mercedes' ESP Electronic Stability Programme. If you want more, there's the option of either SE trim (with climate control and alloys), Evolution Panorama trim (with 17-inch alloys, sports suspension, a lower ride height, the clever Panorama glass sunroof and a 3-spoke leather sports steering wheel) or an AMG package (with a styling kit and larger tyres). 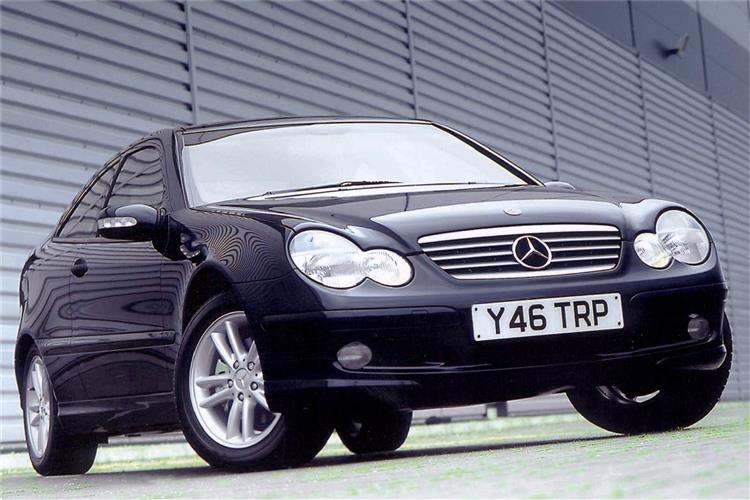