A VAN BY NAME IF NOT BY NATURE (some text hidden)

Faced with the problem of how to convert all of the buyers of small estates and mini-MPVs to the three-pointed star, Mercedes designers came up with the Vaneo. It's by no means the most elegant looking vehicle on the block, but it gets the job done in a solid no-nonsense manner. In many respects, it's the very antithesis of Mercedes' extreme power and premium pricing philosophy, offering an affordable and modest vehicle to those who still harbour some residual badge snobbery. Loosely based on the long wheelbase chassis of the A-class supermini, the Vaneo makes an interesting used buy. Although it never really caught the British public's imagination, the Vaneo is surprisingly rugged and soaks up miles very well.

A combination of the A-class' poor start to life and the British resistance to buying a passenger car with the letters V-A-N in the title probably did as much as anything to scupper the Vaneo's chances of making big sales figures. On the continent, buyers adopt a far more pragmatic approach to van-based passenger vehicles and although the budget end of the market is receptive to cars like the Fiat Doblo, the Citroen Berlingo Multispace and the Renault Kangoo, the thought of paying all that money for something with a Mercedes badge on the bonnet had most prospective customers looking instead at a Renault Scenic, a Citroen Picasso or a Vauxhall Zafira. Launched in May 2002 with a range of four engines and three trim levels, the Vaneo got off to a low-key start and hasn't really picked up.

The 4,192 mm long Vaneo sits on a very long wheelbase of 2.9 metres and on rather wide tracks (1,524 mm front and 1,477 mm rear) making for a different 'footprint' to the A-Class. All this is just as well, for to stand any chance of competing with Scenics and Zafiras, this car needs to be a lot larger than Mercedes' entry-level model. True enough, a highish roofline of 1830 mm is coupled to an interior height of 1240 mm to give an agreeably airy feel to the cabin. Remove the rear seats and you've got 1810mm of length in the rear cargo bay. You won't want to repeat this procedure too often, however as they are rather heavy. Remove the front passenger seat and you can get items up to 3000mm long inside. Socially inept windsurfers may well have found their nirvana. Load the Vaneo up with people and paraphernalia and it rides very well, but such is the firmness of the springing that when it's empty, the ride quality deteriorates somewhat and feels slightly commercial. A seven seat option is available for those who run six a side football teams and/or are gifted procreators, but most will be content with the five seat version which is one of the rare offerings in the mini-MPV class that can not only seat five but can also transport the accompanying luggage. Full marks to Mercedes there. The modular seat layout, two wide opening sliding doors and tailgate give easy access to the large interior and an optional pull-out compartment floor makes loading simplicity itself. The Vaneo is reasonably well equipped, with standard features such as ESP electronic stability control, Brake Assist, twin front and side airbags and the proven sandwich-body construction pioneered by the A-class. 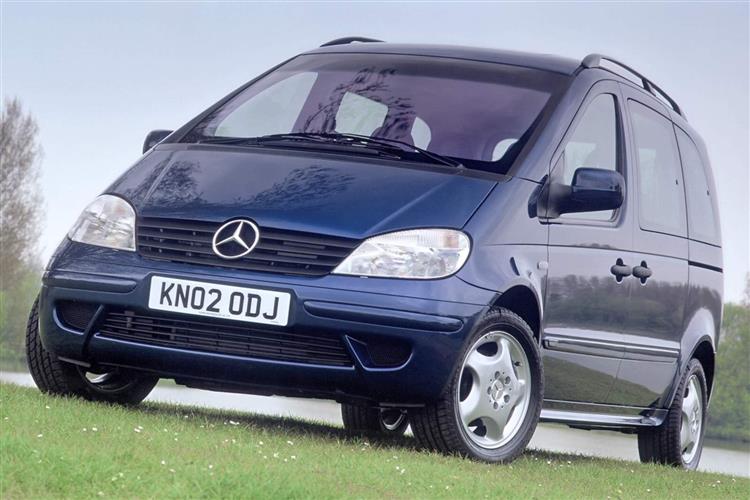