RETURN OF THE WIDOWMAKER (some text hidden)

Of all the versions of the 996 generation Porsche 911 offered, the GT2 is the most controversial. It's the fastest, scariest, most focused and most expensive and divides opinion like no other recent 911. Some say this is a car that Porsche should never have built. Others reckon it's a proper Porsche that credits its driver with talent and courage. One thing's for sure - it's certainly anything but dull. If you're looking for the wildest 911 experience and missed out on the GT2 when new, here's what to look for second time around.

The GT2 had form. There had been a prior 993 generation 911 GT2 that was equally scary and had developed into a cult car, beloved by those who wished to show they weren't scared of Porsche's wild be-winged wonder. The 996 series car was different. Although it at first appeared a more civilised car than its predecessor, looks could be deceptive. The GT2 was a beast. With a tweaked version of the 911 Turbo engine but with rear-wheel drive, no stability control systems to save the unwary, less weight and a spiky power delivery, the GT2 has never been a car for the brave but talentless. Small wonder it earned the nickname 'The Widowmaker'. Of course, skilled drivers could make the GT2 dance, to flow beautifully around a race track with furious pace. That's what it was designed for. Think you're up to it?

It's probably easier to begin with what you don't get. You don't get four wheel drive, there's no stability control to save you from yourself, there are no rear seats and even the glass has been thinned to save weight. In the Clubsport version (likely to be specified by customers keen on track days), there's an interior package that includes a half roll cage, racing harnesses, a fire extinguisher system and flame-retardant upholstery for the seats. The GT2 sits 30mm lower on the road and has a restyled front apron. A very slim grille was added just above it, below the leading edge of the bonnet. At the back, you also lose the rear spoiler which, in the Turbo, flips up and down like a performing seal depending upon your speed: the GT2's replacement is a large fixed affair, with extra air intakes tucked into the wing supports to feed the turbochargers. Inside, carbon fibre trim has been liberally applied around the cabin to give that 'race car' feeling. There are huge race-style seats with leather trim and enormous wings on each side. Where the rear seats were, there are just deep, carpeted wells behind you. In fact, this is a rather good idea: the standard rear seats are useless anyway for anyone other than children and dwarfs. Removing them frees up a remarkable amount of luggage space. 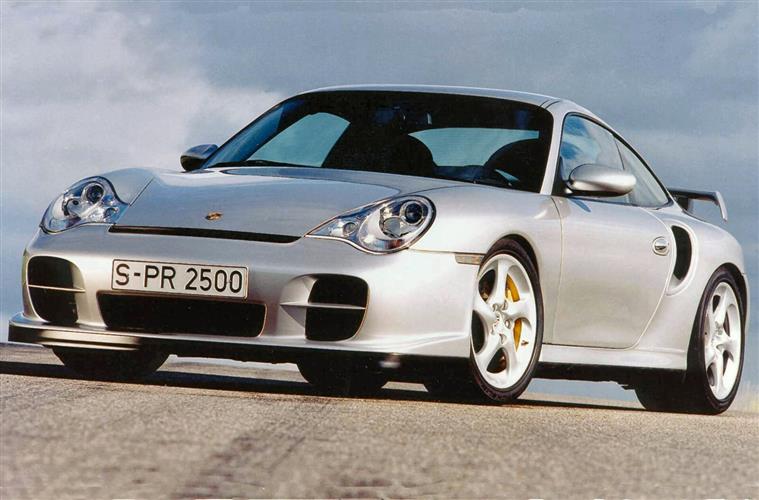