CLASS WITHOUT COMPROMISE (some text hidden)

Every once in a while, a car is announced that is clearly a benchmark design. Looking back over the years, several models come to mind. The Mercedes-Benz SL roadster, the Porsche 911 - even the UK-made Nissan Micra; all were cars against which other makers measured themselves. The last decade has seen another name added to this illustrious list; the Mercedes Benz C-class. The experts were agreed from the outset. This was a car that brought new standards of quality and build integrity to the compact executive sector of the luxury market. It was assembled just like an SL or an S-class and felt just as good to drive - which is why many clever buyers are now snapping these cars up on the used market. You won't find a bargain-basement C-class but no matter which model you buy, it will last and last.

The range was launched in October 1993 to replace the popular 190 and featured a rather unique portfolio of trim packages which enabled the buyer to tailor each car to his or her own individual lifestyle. The surprisingly well appointed entry-level package was badged Classic, while those in search of brighter colours and a more youthful appearance could opt for similarly-priced Esprit models. The pursuit of luxury began in earnest if you paid the premium to specify your car in wood and chrome-trimmed Elegance form. Those of sporting inclination meanwhile, were encouraged to opt for the Sport package, with its distinctive trim, attractive wheels and stiffened suspension. This formula was an instant success, coupled as it was with the usual wide selection of engines. Early buyers chose between 1.8 or 2.2-litre petrol units (the C180 and the C220) or opted for 2.5-litre normally aspirated diesel power (the C250). Two more petrol models followed in the Spring of 1994 - the 2.0-litre C200 and the 2.8-litre V6 C280 - before the initial range was completed by the potent C36 AMG flagship. By this time, a huge waiting list of eager potential C-class buyers had been established. Not that this prevented the engineers at Stuttgart from continuing to improve the car. A wide-reaching series of specification improvements was announced in October 1994, with the addition, amongst other things, of electric windows as standard equipment. A year later, sporting buyers were given an even wider choice with the arrival of a novel new supercharged variant, the C230 Kompressor. This was offered only with the manual transmission to start with, but by the middle of the following year, automatic versions were also appearing. As indeed was a new C250 turbo diesel model. The petrol powered C220 meanwhile, gave way to a faster C230 model. By this time, the estate range had been launched, its emphasis on style rather than ultimate carrying capacity. Included as standard were many of the features that would shortly be incorporated into the 1997 model year saloon range, including a five-speed automatic gearbox, a high-level rear stop light and a three-point centre rear safety belt. By far the most significant change in the C-class history occurred with the launch of the facelift line-up in the Summer of 1997. Out went the 2.3-litre C230 four-cylinder unit and the C280's straight six. In came 2.4 and 2.8-litre V6 engines, both boasting strong performances for their sizes. The AMG C36 was deleted. Every car in the C-class range gained subtle side-skirts, a re-styled grille, darkened tail lights, high security computerised ignition keys and Mercedes' revolutionary new 'Brake Assist' automatic emergency braking system. In April 1998, the new generation C-class line-up was completed by the arrival of an AMG C43 flagship model in saloon and estate forms with a tuned V8 engine. ASR anti-skid control was added to the standard specification at this point, with the ESP traction control system also incorporated into the standard specification a year later. In September 2000, an all-new C-class saloon range was launched with a new range of engines. The old-shape estate continued into 2001 however, and to keep buyers of that car happy, Mercedes fitted the new C200 Kompressor saloon's supercharged engine to the C200 estate model.

What You Getword count: 75 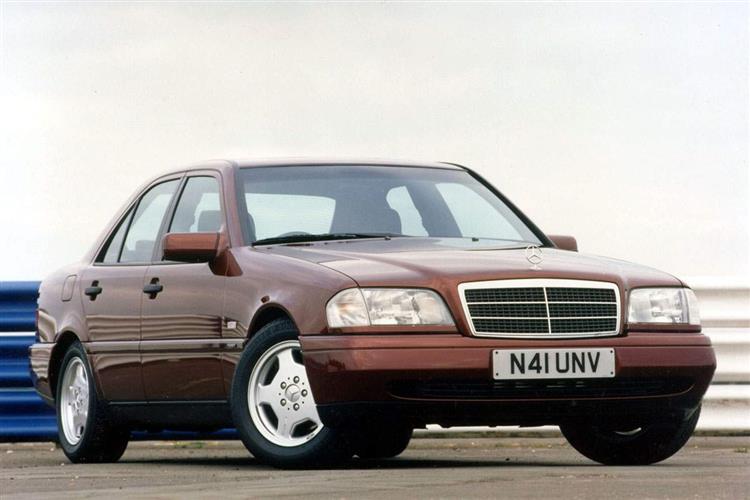