The Mazda MX-6 is not a car to stir passionate debate amongst car enthusiasts. It does nothing poorly, quite a lot well and had a relatively low-key existence. It never received the adulation lavished on the MX-5, or the engineering novelties of the MX-3 V6. In a crowded corner of the marketplace, the MX-6 suffered at the hands of more attention-seeking competitors such as the Vauxhall Calibra, Toyota Celica, Ford Probe and latterly the Fiat Coupe. Despite this, the MX-6 has some seductive qualities. The engine suits the car's nature perfectly, allowing languid cruising and then should the feeling take you, a firm accelerative punch. It's not the most characterful V6 around, but then the MX-6 isn't the most charismatic car. It's understated, elegant and capable and is starting to look like an interesting used buy.

The MX-6 was launched at a time when the UK coupe market was in the doldrums. In early 1992 the choice was basically between a Vauxhall Calibra, a Nissan 200 SX and a Toyota Celica. Worthy offerings, certainly, but nothing out of the ordinary. The MX-6 was a little bit different. It shied away from any 'rally replica' pretensions and didn't look like a re-skinned Mazda saloon. In fact its closest rival was probably the Audi Coupe range, which offered relaxed performance and a strong image at prices comparable to the Mazda's, albeit without a V6 engine. Only one variant was ever made available, the 2.5i V6, although it was steadily uprated and fettled throughout its lifetime. In January 1993 it received a driver's airbag as standard, while in September 1994 new alloys were added and the interior was spruced up a bit. A height adjustable driver's seat and seatbelt pretensioners were also fitted. In March 1995 a transponder immobiliser system was fitted, and in July 1996 leather upholstery and an electrically adjustable driver's seat were added to try to revive flagging sales.

What You Getword count: 231

To get an idea of the MX-6's appeal, remember that the Ford Probe shared much of its mechanicals, both being assembled at Flat Rock, Michigan. In many ways, the Probe's successor, the Ford Cougar is a more modern interpretation of the MX-6 philosophy; mature and relaxed without trying too hard. The MX-6 always had a spacious, if blandly styled, interior that boasted good rear legroom, but the swoopy roof profile meant it was tight for taller occupants. Access into the back is good due to a sliding passenger seat, but annoyingly, once slid, that seat has to be readjusted for rake, something that will drive the front seat passenger mad. The Mazda also possessed a boot far larger than any coupe had the right to. Four golf bags could squeeze into the cavernous void, but a high loading sill meant you'd need to lift. The fascia is boldly swooping although finished in cheap plastics - a problem common to all early nineties Mazdas. Cost has been taken out of the most important parts of the car, namely the bits you touch. The seats aren't overly supportive and the steering wheel and gearknob feel insubstantial to the hand. The pedals also feel slightly lightweight. This is a shame, as the MX-6 is a genuinely pleasant car to drive. For a few pounds more, it could have created a far more favourable impression. 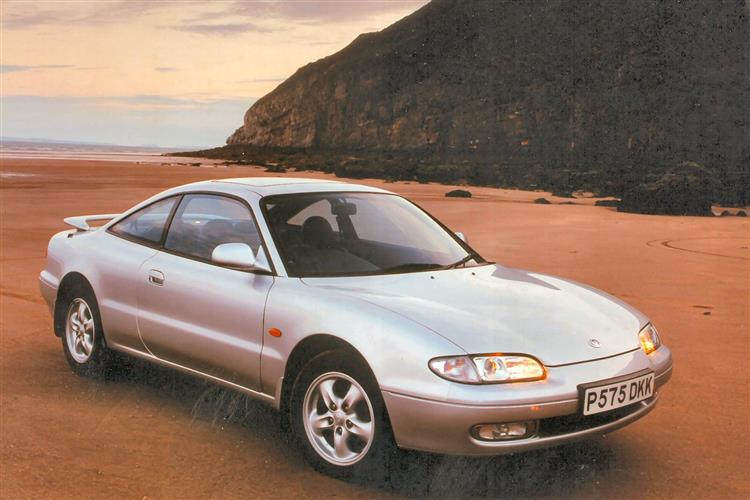