THE JOY OF SIX (some text hidden)

The Mazda MX-3 is a product of Mazda at its best. The early nineties saw Mazda launching the MX-3, the RX-7 twin turbo and the evergreen MX-5. These driver's cars were cherished by their owners and are much sought-after on the used market. The MX-3 carried on where the sorely-missed original Honda CRX left off, bridging the generation gap between the little Honda and cars like the Vauxhall Tigra and Ford Puma. Available in two guises, a 1.6-litre four-cylinder and the fascinating 1.8-litre V6, the MX-3 lasted for seven years and, like the RX-7 model, has yet to be replaced. When the MX-3's successor does arrive, perhaps then history will remember the little Mazda for what it was: a sweet-handling, technologically innovative baby coupe.

Whilst the MX-3's on-paper credentials looked good, its timing was even better. Launched in 1991, the little Mazda took advantage of the decreasing GTi market. Insurance costs had given the hot hatch market a bash and the Peugeot 205 GTi had just died, whilst the 306 was two years away. Volkswagen's Golf GTi had grown old and bloated, and warm hatches just didn't appeal. The Mazda MX-3 was a perfect product of its time, offering modest performance and a smart body shape coupled with a reasonable insurance rating. Two models were launched, the self-explanatory 1.6i and 1.8i. The larger-engined MX-3 was by far the more interesting with its tiny V6, but the four-cylinder car proved more popular, reflecting the premium most people put on an affordable insurance grouping. In January 1993 side impact beams were fitted whilst in June 1993 a limited edition all-white 1.8-litre variant was launched. Only 150 examples of this model were produced. July 1994 saw a mild update, with new seats and trim. The 1.6i received a 108bhp engine, 20bhp up from its previous meagre power output, whilst the 1.8i received a driver's airbag and new alloy wheels. Strangely enough, it wasn't until October 1996 that a manual gearbox was made available on the 1.6i, perhaps reflecting Mazda's initial product differentiation between the gentle 1.6i and sporty 1.8i. In February 1997 Mazda deleted the 1.6i automatic, re-introduced it in June, and then quietly deleted the entire MX-3 range the following year.

The two models of the MX-3 range are so different as to be almost like two different cars. The 1.6i is a sedate performer in automatic guise, although the manual car is a fair bit zippier. The 1.8i boasts a great deal more driver appeal, with wider wheels, tyres and uprated suspension. The little V6 revs smoothly and with a sporty exhaust note. The driving position is very good, although the interior is cramped. Adults will have to squeeze sideways on the rear bench where headroom is similarly restricted. Despite this, the MX-3 does have a practical side, with a large, if somewhat shallow, rear-loading bay. The view from the driver's seat is of generic Japanese plastic. Lots of it. The high-backed seats offer good support, but the long doors make reaching the seatbelts awkward. The MX-3 is fitted with possibly the world's most annoying warning chime system, informing you when a door is open, when the lights are on and so on. It also has a very meagre reserve on the fuel tank. When the light goes on you have just fifteen miles before the fuel runs out. Equipment levels are reasonably good, with even the base model boasting an electric steel sunroof, tinted glass, electric windows and central locking. The 1.8i looked more purposeful with its factory fitted rear spoiler, alloy wheels, twin exhausts and deep front spoiler. As long as you are aware that the 1.6i is not overtly sporty and the 1.8i whilst not particularly quick is fun to drive, you won't go far wrong. 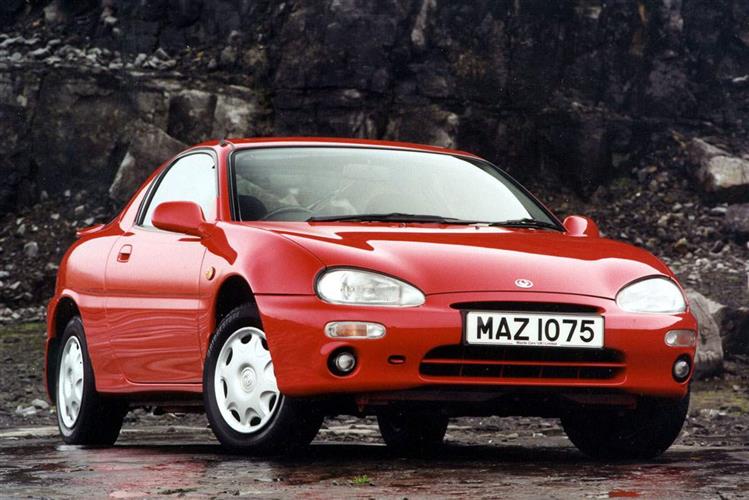