SIX SHOOTER GUNS DOWN THE OPPOSITION (some text hidden)

Nobody quite saw the Mazda6 coming. It's predecessor, the 626 series, was inoffensive, utterly reliable and massively bland, automotive Teflon that few missed when it slipped from view. The Mazda6 on the other hand was a revelation. Few gave much credence to the 'zoom-zoom' advertising that claimed that Mazda's new mid-range contender had the soul of the MX-5 sports car. Until, that was, we got behind the wheel. No other car in this class is such a fun drive, not even the all-conquering Ford Mondeo, and soon the Mazda6 was hoovering up awards and plaudits. Used examples are now becoming a little more commonplace so here's an opportunity to discover the car that really accelerated the ongoing Mazda success story.

Much of the credit for the excellence of the Mazda6 can be laid firmly at the door of Ford. With a controlling share in the Hiroshima company, the Blue Oval sent some of their best managers, engineers and designers to lick the company into shape, aware that it was becoming very much a one-trick pony. Beyond the MX-5, Mazda had very little to crow about. Things are very different now. The success of the Mazda6 has been followed by the Mazda2, the Mazda3 and the stunning RX-8. The Mazda6 is the car that really turned people's head though. Launched to an unwitting public in 2002, the 6 offered a lively ride, a range of interesting engines, ultra-competitive equipment levels and, best of all, a sticker price that read almost like a South-East Asian cheapie. It couldn't possibly fail, especially as critical acclaim followed soon after launch. The 1.8, 2.0 and 2.3-litre petrol engines kicked things off, although it wasn't too long before a pair of 2.0-litre diesels and an estate variants were added to the range with a Sport4 all-wheel drive estate model debuting in early 2003. A reasonably thorough facelift was unveiled in the summer of 2005. Visually, this added up to reprofiled bumpers, a revised grille and new headlight clusters which pick out the four individual lamps in chrome. Interior materials were upgraded at the same time while body rigidity was improved, emissions were reduced and some engines received more power. Most notably, the 136bhp diesel unit was boosted to 141bhp. The 256bhp Mazda6 MPS went on sale early in 2006 with a 0-60mph acceleration time of 6.4s. An all new 6 made its debut in the autumn of 2007.

What You Getword count: 505

Elements of Ford DNA have inevitably seeped into the Mazda, although seated in the cabin of the Mazda6, this is perhaps no bad thing. The neatly sculpted aluminium-look centre console, the big-button stereo and the sharp hooded look of the fascia all resemble Mondeo, but instead of the remainder being a watered down version of Ford's class leader, it's refreshing to note that Mazda have pitched in with some genuinely pleasant touches of their own. The steering wheel could have cribbed from the standard Passat/Mondeo mould, but instead it's a neat three-spoke item. Likewise, the controls on the centre console don't ape the Euro mainstream. This could only ever be a Japanese car, but akin to the Nissan Primera, it revels in its origins instead of trying to be something it's not. The same could be said for the exterior. The tail lights might shout Lexus to some, but the shape is neat, sleek and ineffably Oriental. Three body shapes are being offered; a four door saloon, a five-door hatchback and an estate version. A twin-turbo all-wheel drive 276bhp MPS sports version of the Mazda6 will also be offered, although don't expect to see one anytime soon. The shape has captured more than a few orders, eschewing the current trend for huge headlights in favour of the sharkiest front end to come out of Japan since the Mitsubishi Galant. Although in S, TS and TS2 trims, it's smart, the 17-inch wheels offered on the Sport model give the car genuine presence. It's just a shame that they also punch up the severity of the ride so firmly. Five engines are available - all four-cylinder units. Petrol-wise, there's a 1.8-litre that makes 119bhp, a 2.0-litre that generates 140bhp and a 2.3-litre with sequential valve timing that's good for 165bhp. Corporate users may, however baulk at the emissions showings. There are two common rail diesel engines, putting out 121bhp and 136bhp respectively. Equipment levels are strong across the range, the entry-level S specification being fitted with twin front, side, and front and rear roof airbags, should anti-lock brakes with electronic brakeforce distribution prove insufficient. Manual air conditioning, electric heated door mirrors, a Thatcham category 1 alarm and an inoffensive set of 16-inch alloys are also included. The TS adds, amongst other features, a CD player, a trip computer, climate control, cruise control and a leather-rimmed steering wheel with stereo controls. The awkwardly titled TS2 ups the ante with stability and traction control systems plus emergency brake assist and a powerful BOSE audio system linked to a six-disc CD multichanger. There's also a sunroof and the option of leather seats and sat-nav. The Mazda6 Sport is available either with the 2.3-litre petrol engine or the 136bhp diesel. Featuring a rear spoiler, Xenon headlights, 17" alloy wheels and metallic paint, it's very good value for money. Slightly less convincing in its value proposition is the Sport4 estate with the security of all wheel drive. Perhaps as a used buy this car will begin to make a little more sense. 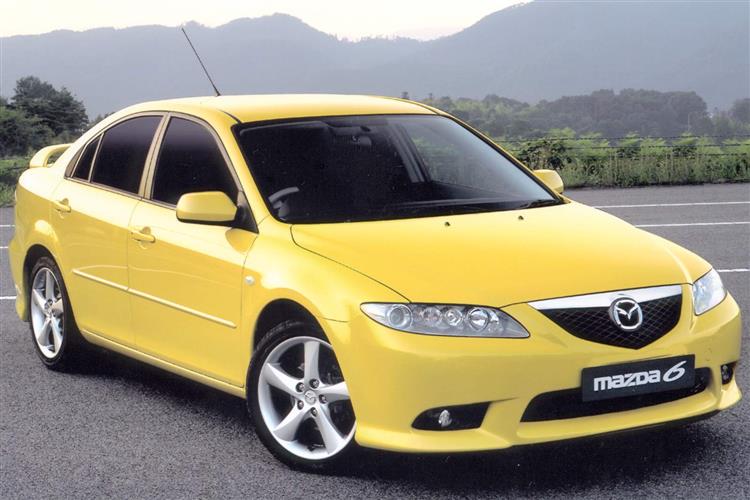