Few would deny that the Vauxhall Corsa always sold on its pert good looks. Even the very first 1993 versions still look reasonably neat to this day and it must have acted as a genuine temptation for the General Motors designers to come up with a car that was as good as it looked. Although steps in this direction were taken in 1997 with an overall revamp, it wasn't until 2000 that this aspiration was realised. The 2000 shape Vauxhall Corsa answered many of the criticisms levelled at its predecessors and selling alongside the Astra, it formed part of a series of genuinely class competitive Vauxhall models. As a used proposition it is still appealing.

Perhaps reasoning that it was unwise to meddle with a winning formula, Vauxhall wisely chose to style the Corsa in an evolutionary rather than revolutionary manner when the second generation model was unveiled in 2000. The first models arrived in UK dealers in October 2000 and were an instant success. Here, at last, was a Corsa that went as well as it looked, boasted class leading technology like the Easytronic gearchange and was fitted with some decent engines. The 1.6-litre engine was dropped and a 1.8-litre 16v unit introduced for the top SRi model. There were also two new diesel versions along with a completely revised platform and shape. In late 2001 a diesel version of the popular sporty SXi trim level was announced. An Eco version was launched in Spring 2002, essentially a more fuel-efficient version of the 1.0-litre Club. The next major facelift happened in the autumn of 2003 when the CDTi common-rail diesel engines arrived as did Twinport fuel-saving technology for the 1.0 and 1.4-litre petrol models. Cosmetic changes were restricted to clear-lens headlights, body coloured bumpers and side rubbing strips. The 1.7CDTi engine stopped being offered in the summer of 2005 and the SRi trim level was replaced by SXi+ around the same period. The replacement for this Corsa was launched in September 2006.

What You Getword count: 400

Though maybe not as cute in appearance as their predecessors, the second generation Corsa models grew up in all the areas that were becoming irritating in the previous model. And added a few virtues of their own. The chassis and suspension were designed from a clean sheet of paper - though the engines bolted on to them weren't quite as fresh, borrowed as they were either from the previous model or from the Astra range of the day. Not that this should put you off. Latterly at least, engines were never really a Corsa problem - not in the popular lower order models anyway. The three cylinder 1.0-litre 12 valve unit is a jewel: so is the 1.2-litre 74 bhp option that 50% of customers chose. There wasn't much wrong with the 89 bhp 1.4-litre 16v motor borrowed from the Astra either. Larger-engined petrol or diesel-powered Corsa's had been impressive however, hence the introduction of a 123bhp 1.8-litre petrol unit for the flagship SRi. And two 1.7-litre 16-valve turbo diesels developing either 64 bhp (Di) or 74 (DTi). A sporty SXi 1.7 diesel was also available but if you want the more advanced oil-burners, you'll need to look to the CDTi engines with their superior refinement and torque characteristics. In terms of packaging, this Corsa was a huge step forward from its predecessor. Thanks to a huge wheelbase by the standards of its day, the little Vauxhall had as much space inside as competitors like Fiat's Punto and Skoda's Fabia. The three inches of extra shoulder width over the previous model make all the difference in creating a car that feels large enough to be something from the next class up. Nice touches? Well, there's plenty of storage space, with large door bins and a shallow tray beneath the front passenger seat. Plus there's a sunglasses holder by the driver's head. You'll also like the way the rear wash and wipe activates when you select reverse in the rain. And the 'infotainment' system you can upgrade to include everything from a telephone to satellite navigation. Gripes include 'cupholders' which are actually almost useless indentations in the glove box lid. Oh and split-folding rear seats that don't fold flat. Which is a pity since in every other respect, the loading possibilities are impressive: up to 1,060 litres of space is available with everything folded. Ironically, the 3-door's boot is more spacious. 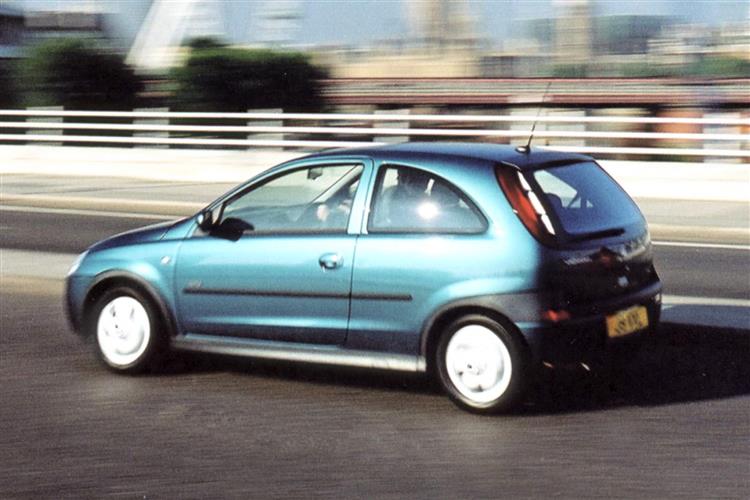