Since the inception of the Skyline GT-R in 1969, the model has become something of a cult. Motoring enthusiasts refer to the Skyline in the kind of hushed reverential tones once reserved for Italian exotica. Tales of its performance capabilities are legion, yet to most the Skyline appears nothing more than a big, rather brash Japanese coupe. Finding an unmodified used Skyline is a tricky task, yet this is one of the few cars that can handle more power without catastrophic effect. The models imported to the UK were the R33 GT-R and its replacement, the R34 GTR. The enthusiasts favourite, the earlier R32 GT-R, was never officially imported to these shores, although a fair number turn up as grey import models only. Whichever model you choose, a good used Skyline is one of the few cars that will embarrass pricier and more established supercars such as Porsche's 911 Carrera. With Japanese imports arriving in ever increasing numbers to feed the demand for anything with a Skyline badge, there's a great choice available.

The Nissan Skyline started life in 1969 as a sports coupe that claimed the scalp of many more illustrious rivals on the race track. Early emissions laws killed this model in 1973 and it was not until 1989 that the R32 GT-R was launched. This enjoyed a degree of racing success, winning 29 of 29 races in the 1990 Japanese Touring Car Championship. In 1997, UK buyers were treated to official imports of its successor, the R33 GT-R. Hype was cranked up to stratospheric levels with news of the R33's sub 8 minute lap record of the fearsome Nurburgring race track and the Skyline legend was born. The R33 was available in one model only, the top of the range V-Spec, and available through only one authorised Nissan dealer, Middlehurst Nissan in St. Helens. Priced at £50,000, sales were scavenged by Japanese imports of the big coupe, which had been on sale in Japan since 1995 and were therefore ripe for the UK market. The R33 GT-R lived on until 1999, when it was replaced by the R34 GT-R, again available only through Middlehurst, but with even more high-tech features than before. The revelation that the lap record of the Nurburgring was set by a Skyline on slick tyres and that modern supercars such as the Porsche 911 GT3 were quicker dented the Skyline myth a little, but it is still the ultimate icon of the Playstation Gran Turismo generation. The R34 Skyline sold in modest numbers and was finally phased out in 2002, the 350Z sating the appetite of Nissan performance enthusiasts until the next GT-R arrived.

The Skyline GT-R made many more exotic rivals look a bit silly. Here was a car that could seat four in comfort, was blessed with a large boot and good reliability, yet could still lap the Nurburgring quicker than a Lamborghini Diablo. Four-wheel drive and four-wheel steering are just part of the equation. The R33 and R34 GT-R V-Spec models imported to the UK were also equipped with ATTESSA-ETS-PRO, a system which switched drive to whichever of the four wheels most needed it, correcting the car if it skidded from its intended line. The R33's interior is reasonably bland, but the seats grip superbly and the driving position signals the Skyline's sporting intent. The R34 model is a good deal more dramatic, with a gimmicky, if strangely intriguing, display on the dash. This measures all manner of functions from exhaust temperature to g-forces. The fit and finish of the R34 is a lot classier, with brushed aluminium effect trim and, on UK cars at least, Connolly leather upholstery. There's also a six-speed Getrag close ratio gearbox and some great styling parts. The front and rear spoilers are huge, the eighteen inch wheels and Brembo brakes eyecatching, and the overall effect extrovert in extremis. 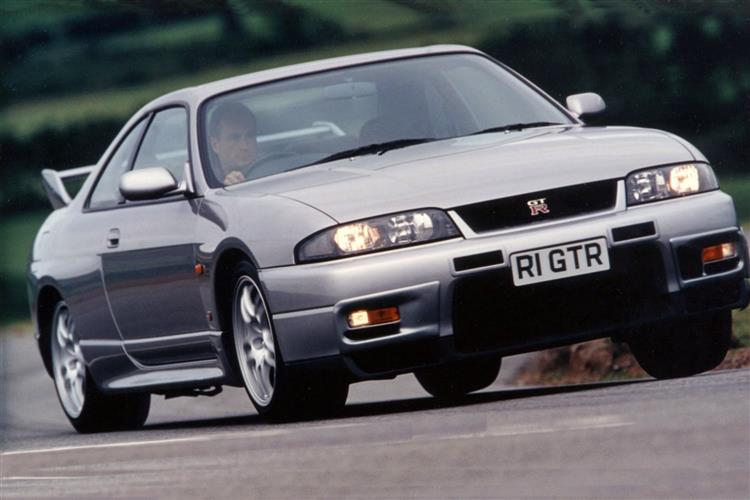