FOCUS ON SPACE (some text hidden)

Very much the car retailing success story of the last few years, the Ford Focus was responsible for forcing every rival manufacturer to up its game. The hatchback models sold in their multitudes but the saloon and the estate models were a little less ubiquitous. Here we take a look at buying one of Ford's compact load luggers and ask whether it's worth looking for a bargain.

Early Ford Focus Estate models date back to 1999 but it's worth seeking out one of the facelifted first generation models we look at here, introduced in 2002 and on sale until the MK2 Focus Estate arrived in Spring 2005. Although the post-'02 models look a little sleeker and are slightly better equipped, the real reason for doing this is these cars featured Ford's new generation of common rail TDCi diesel engines (or at least most of them did: the old 90bhp TDdi unit continued for a year or so after the facelift in some cheap variants, so make sure you know what you're buying). The whole diesel thing is important since if you're looking for an estate like this, you're probably better off going for diesel power. And the diesel powerplants fitted to early Focus models were woeful. In contrast, their 1.8 TDCi replacements were class-leading, offered in 98 and 113bhp states of tune. To help publicise the 2002 facelift, Ford also launched a sporting ST170 'warm hatch' petrol range-topper which arrived in estate guise in 2003. The visual tweaks visited on the standard cars after all, weren't likely to get too many tongues wagging amongst potential buyers. For the record, these amounted to the addition of minor things like subtle front bumper rubbing strips much in the style of later Mercedes A-class models. The narrow black strips below the headlights afforded some protection in a multi storey car park, but they were chiefly there to add a touch of gravitas to the front end. The nose of the Focus also benefited from a slightly more prominent mesh grille as well as the blue-tinged xenon headlamps. The front indicators, previously mounted below the headlamp unit, were incorporated inside the lamp housing in a similar vein to Volkswagen's Golf. The most obvious difference to the front end was the different shape of the under-bumper air intake and the fog lights. Instead of a benign arc to the intake, the late shape Focus featured a unit bounded on either side by some quite aggressive diagonal supports giving the Focus a far more sporting appearance. An LPG powered Bi-Fuel model was launched in June 2003. The range was replaced in 2005 with an all-new Focus model with an even more specialised estate model offered.

One of the longest wheelbases in the class (2615mm) means almost unrivalled load-carrying capacity (1580 litres) and a space optimised for shape and access. It also means that Focus estate passengers can enjoy more head and legroom than in any of the other three bodystyles. Three adults can sit comfortably across the rear bench. Other differences include stiffer suspension to facilitate a 500kg payload (or 550kg if you find a car with the extra-cost 'Business Pack'). Despite this, the estate actually has a slightly softer ride than, say, the Focus saloon, thanks to a floor height some 25mm higher (the necessary longer wheel travel creates better ride comfort). Understandably, this might lead you to expect a high loading lip over which to lug heavy items. Not what you need on a rainy afternoon at Tescos. But here again, the facts are contradictory. The figures show that the Focus estate had the lowest loading lip in the class. Yet at the same time, there's more height in the cargo area than can be found in any other comparable rival. All of which would be of little use if the estate compartment were not particularly wide. Well it isn't by the best class standards but 1156mm ought to be enough. Few small estate customers will regularly want to carry items more than a metre wide. Some apparently wide estates are also compromised with suspension turret intrusions so that huge items must be tilted or lifted above them. Again, the Focus remains a practical choice, thanks to its multi-link suspension, all of which is concealed under the floor. Passengers are also pretty well taken care of. The car led its class in terms of headroom at the front and also bettered most of its competitors in terms of head, shoulder, leg and knee room at the rear. Equipment meanwhile is pretty average for the class, though buyers did boost it by ordering various option packs. The cleverest of these is the 'Interior Versatility Package (IVP in Ford-speak). This included a fold-away front passenger seat, a 40/20/40 rear seatback, a 'smart' package tray to neatly control items that would otherwise roll around in the boot and additional stowage nets, kangaroo 'pouch-style' pockets and hooks. 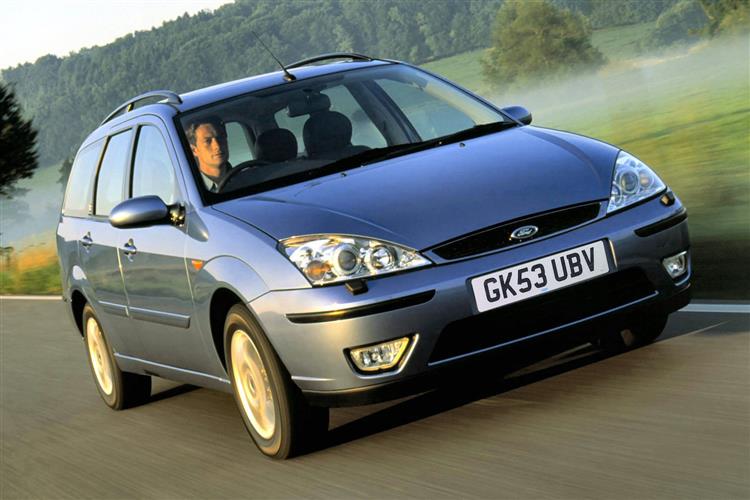