Look long and hard at a picture of a Fiat Marea. Do you recognise it? Most won't and this represents something of a shame, not least for Fiat who have been trying to sell the Marea in the UK since 1997. Any Fiat larger than a Tipo has tended to be eyed with considerable suspicion by the UK car buying populace. Sure, the Italian company can make cheap and cheerful models, and with the Coupe can now build decent sporty cars, but we remain unconvinced about anything mid-sized or larger that hails from Turin. It's a suspicion that should have been laid to rest some time ago. This lack of confidence is also something that used buyers can exploit to their considerable advantage. The fact that the Marea has never really caught on in the UK means one sure thing. A current-era Fiat with 1970s era depreciation, or put another way, a virtually new car going for a song. Suddenly the Marea looks a whole lot more appealing.

Unpopular as the Marea has proved, it would still win by a landslide if a popularity contest were organised against its predecessor, the Tempra. Here was the car that pretty much nailed the lid down on the Marea's chances of sales success. The Tempra contained every stereotype that we like to attach to larger Fiats. Underpowered, plasticky and awkwardly styled, with a weak image and peppercorn residuals, the Tempra was one of the few new cars that could justifiably be called a disaster. Launched in March 1997, the Marea didn't have to work too hard to outshine its forebear. Perhaps because the public were unable to grasp the sheer volume of improvements made over the Tempra, the Marea was tarred with the same brush. Based on a stretched version of the Fiat Bravo/Brava chassis, the Marea was almost as big as a Mondeo/Vectra, yet prices were more akin to Focus/Astra. Available with a range of six engines and in either a four-door saloon or five-door estate (the 'Weekend' in Fiat parlance), the Marea range offers a wide choice. March 1999 saw the introduction of Fiat's excellent JTD direct injection diesel engines to the Marea range. Shared with Alfa Romeo, this engine brings sporty performance to the diesel realm. Real power lovers will hanker after the 2.0-litre 20v engine, which is shared with the Fiat Coupe and was also uprated to 155 bhp at this point. At the same time as these engines appeared, Fiat took the opportunity to enhance the standard trim levels across the range.

The Marea is a good looking, well equipped and tightly priced car. With its bulbous styling and unfortunate image, it's tempting to dismiss the Marea as one of those 'tries too hard' cars, but that would be doing it a disservice. Still, the perception of a big, friendly but slightly stupid dog lasts until the moment you get in. The Marea seems genuinely well-built and quietly competent. The dash materials, though unlikely to trouble Audi's buyers, are a long way from the cheap, rattling yoghurt-pot standards that Fiats of yore displayed. Post 1999 cars benefit from air conditioning, ABS, split fold rear seats and upgraded six-speaker CD-compatible stereos. The interiors were also perked up, a weak area of earlier cars. Instruments were also redesigned for added clarity and better upholstery and carpets are evident. It's a lot better than you'd expect and is an interior to which some genuine thought has been given. This is perhaps not surprising, the re-style coming within months of the launch of the amazing Fiat Multipla, so some ideas must have been shared. All models in the range are duplicated in either Weekend (estate) or saloon body styles. Fiat's custom of suffixing the engine size with approximate horsepower figures helps in identifying models. Of the petrol engined cars, there's the 1.6 100 in either SX or ELX trim, or the1.8 115 ELX. The 2.0 155 cars are available in ELX or HLX trim designations. The diesel range is probably more interesting. It's best not to bother with the antiquated engine fitted to the entry model diesel, the Marea 1.9TD 75 SX, as it's coarse and slow compared to the more modern units in the range. The 1.9TD 100 engine is available in SX and ELX designations, but it's best to opt for the more high-tech direct injection motors. The entry level direct-injection is the Marea 1.9JTD 105 SX, and an ELX trim is also offered. Next up is the 2.4 TD 125 HLX, although this was replaced in March 1999 by the star engine of the range, the 2.4 JTD 130, available only in top HLX trim level. 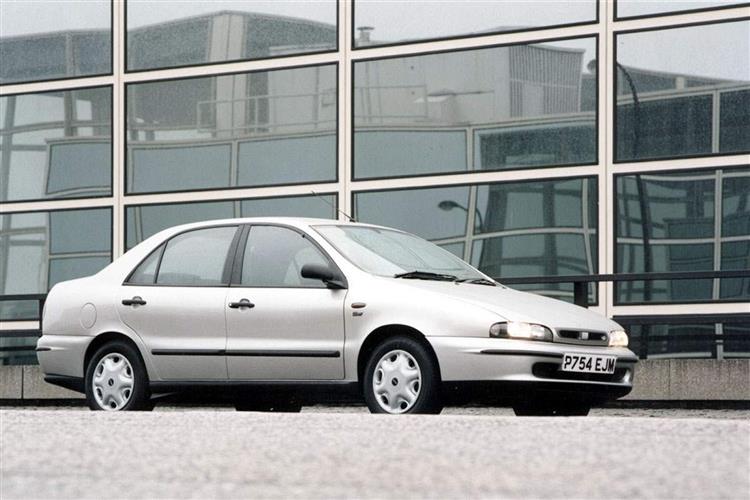