With the Mark 4 Astra range, Vauxhall waved goodbye to dodgy build quality, mediocre dynamics and pudgy styling. Make no mistake, this Astra was as much of an advance over its predecessor as Ford's Focus was over the outgoing Escort. But does this make it a wise used purchase, or will history consign this Astra as an also-ran, with resultant effects on its residual value?

Before the Mark 4 version was launched in February 1998 the Astra had, for a long time, been a makeweight, a car that justified its own existence purely on fleet finance balance sheets. There was no logical reason for a private buyer to choose an Astra, because there were so many better options about, and Vauxhall realised this, knowing they had to raise their game. When the new range was unveiled, UK buyers realised it was worth the wait, for the car was demonstrably better than anything in its class. The Astra held this position for a mere eight months until the launch of the Ford Focus, but although the Astra had to give second best to the all-conquering Ford, it was still an excellent car. The range initially consisted of three and five-door hatchbacks and five-door estates. Seven engines were available: a 90bhp 1.4i 16v, a 75bhp 1.6i 8v, a 100bhp 1.6i 16v, and 115bhp 1.8i 16v petrol units and 68bhp 1.7 turbodiesel and 2.0-litre direct injection diesel units. Trim levels started at Envoy, and ascended through Club, LS, Sport, CD and CDX. In September 1998 the 136bhp 2.0-litre SRi model was added, and in November the four-door saloon range was introduced. December 1998 saw the advent of Bi-Fuel versions which ran on Liquid Petroleum Gas (LPG) as well as regular unleaded petrol. In October 1999 a new .com version of the Astra 1.6i was launched, sold at a reduced price over the Internet and available in five door hatch or estate forms, while summer 2000 saw the launch of the stylish Astra Coupe. With a roofline vaguely reminiscent of the much-loved Calibra coupe, this two-door Astra, with styling by Bertone, has exploited a niche uninhabited by the Focus. The 1.7-litre turbodiesel engine was also replaced by a more advanced turbocharged direct injection unit of similar capacity, and an intercooled 2.0Dti engine was introduced alongside the regular 2.0-litre direct injection diesel. For the 2001 model year, the entry-level 1.6-litre engine's power was upped to 85bhp, while the 1.8 developed 125bhp. The 2.2-litre engine seen in the Astra Coupe and sporty VX220 roadster was also introduced to the mainstream range. Comfort and Elegance trim levels replaced CD and CDX respectively in autumn 2001 at a time when the rest of the Astra range enjoyed a boost in standard equipment levels. Spring 2002 saw the introduction of the 190bhp Astra SRi Turbo as the king hot hatch in Vauxhall stable. 2003 saw some minor variations to equipment levels but the big news was Vauxhall's first foray into the common-rail diesel market with their 1.7-litre CDTi powerplant. This offered a smoother and more economical alternative to the somewhat outdated direct injection units with which Vauxhall had unsuccessfully tried to do battle against ever-more sophisticated Ford diesels. The mark 5 Astra arrived to replace the mark 4 in the summer of 2004.

Despite the Astra's undoubted competence, the competition has not stood still since it was launched at the beginning of 1998. New diesel engine technology and improved equipment levels have appeared in rivals, prompting a response from Vauxhall. The result was two new diesel engines and upgraded specifications for the latest model line-up. From 2000, all Astras included electric front windows and remote control central locking, while air conditioning (which was fitted as standard by many of the Vauxhall's direct rivals) came with all models from LS level upwards. The popular Club gained an adjustable steering column, upgraded remote-control audio system and electric windows. Air conditioning was added to the SXi and both this version and the CD could be ordered with either a 16-valve 1.6 or 1.8-litre petrol engine. The 1.7DTi diesel engine option is more powerful and frugal than the TD unit it replaced. When developing the latest Astra, Vauxhall's engineering team set about their task with a will, embarking on one of the toughest development programs ever undertaken by parent company General Motors. Over 600 test cars circulated the globe, covering over 5.7 million miles. From Los Angeles to Sao Paulo, from Pikes Peak to Death Valley and Ayers Rock, the Astras faced up to the worst conditions this planet has to offer and didn't leave until the engineers were satisfied. This kind of talk is nothing new from many manufacturers. The difference is that in this case you really can feel the results; you don't need to go very far to realise that you're at the wheel of an uncommonly well-engineered car. Build quality is outstanding and the whole thing feels impressively solid. It's no surprise to learn that the bodyshell is an unbelievable 50% stiffer than that of the old model. There's not a weak link across the entire range. From the entry- level hatches to the top of the range coupes, perhaps the only area where any complaints could be levelled is in the area of styling. Whilst tidy, the Astra range doesn't have that wry, knowing touch to its design that so many of its rivals have adopted. 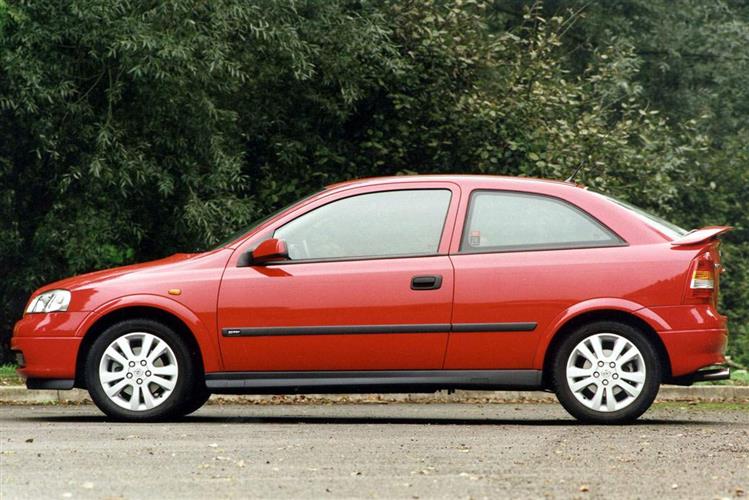