The Toyota Land Cruiser Colorado's main rival, the Land Rover Discovery, has led a star-crossed existence. Initial poor reliability was cracked, only for the improved model to run head on into the challenge of the big Light Duty Series 'J90'-era Toyota. Guess which came off worst? The Colorado aimed to better the Discovery in off road ability, reliability and perceived quality and succeeded on all three counts. Despite this, the Colorado never managed to trump the Discovery in terms of British sales. Perhaps buyers were unaware of the Colorado's qualities. As smaller brother to the Land Cruiser Amazon, public perception of the Colorado is as a 'lifestyle' accessory. This sells the Colorado short. In five-door guise it can seat eight and has a genuinely imposing presence. It's certainly large, but not impossibly so. With Toyota's reputation for reliability and after sales service, the Colorado should have been better received. As a used buy it definitely merits closer inspection.

In 1996, the launch of the 'J90'-series Land Cruiser Colorado was Toyota's answer to critics who thought the Japanese giant had lost its way with family SUVs. Toyota's engineers had concentrated not on generating meaningless 0-60 statistics, but on aspects which would give 'real-world' benefits. Aspects such as the torque available to crawl up steep slopes, the capacity to turn the eight seats into a double bed and so on. It is just these benefits that endow the 'J90' Colorado 'Light Duty Series model with such massive kudos amongst those who know their off-road vehicles. Like its Nissan counterpart, the Patrol, the Landcruiser has never sold on its ability to impress at Harvey Nicks. It's badge may not carry much weight in high street beauty parades, but ask any outback rancher what brand he'd choose the answer is always the same. "A Cruiser, mate." The Land Cruiser Colorado range was facelifted in 1999 with a redesigned front grille, bumper and headlamps. A new FX model was added to the range and standard trim levels were improved. Air conditioning and anti-lock brakes were offered on all models and the interiors received a sprucing.

What You Getword count: 181

Only the best real world 4x4 bar none. If you intend to use a 4x4 to its design limits, none will be as hardy as a Land Cruiser. Despite its somewhat glitzy looking front-end treatment, the Colorado is a tough cookie. The best efforts of Solihull pale by comparison. Yes, the Colorado has the beating of Land Rover. Jeep Cherokee, Mitsubishi Shogun, Nissan Patrol, Mercedes M-class; bring them all on. The Land Cruiser will see them all off. The model range sees nine versions spread across three trim levels - FX (replacing the previous EX), GX and VX - and two different body styles - three and five-doors. A better specified GX three-door range-starter replaces the previous three-door EX entry-level model. GX and VX models have extended wheel arches, bigger bumpers and side cladding, with three spoke alloy wheels. The base model five door is the FX, identified by six spoke alloy wheels with narrower tyres. FX models feature a Sony radio cassette system as standard whilst the GX and VX models get an upmarket Sony item with ten-disc CD autochanger. 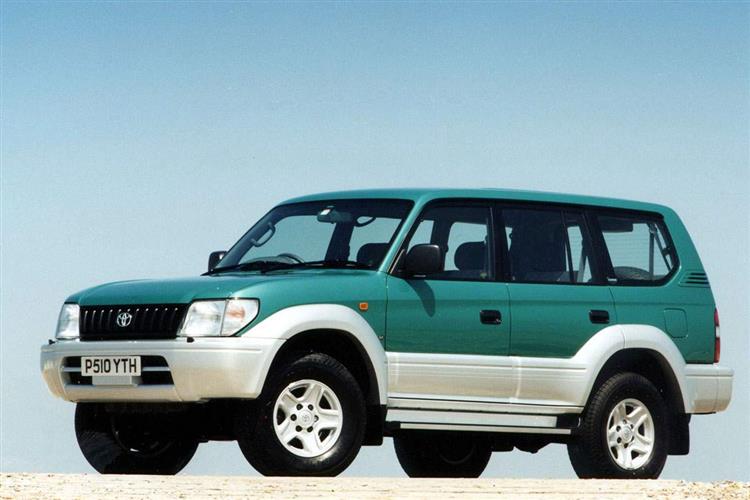