SWEDE WITH EVERYTHING? (some text hidden)

It says much for Volvo's marketing skills that for most customers, the S70 saloon and V70 estate range tends to be thought about as being a newish product. In fact of course, it's a revamp of the much older 850, originally launched back in 1993. Though the 850 was the car that gave the franchise a younger image, by the end of 1996 it was beginning to look a little tired. Hence, British designer Peter Horbury's thoughtful package of upgrades - and the change of name. Like most Volvos, the S70/V70 series makes a good used buy; with the 850 heritage, its problems were well sorted right from the start.

The S70 saloon and V70 estate line-up was launched in December 1996 with a range that almost exactly reflected the previous 850 line-up. That meant a choice of 2.5-litre turbo diesel or 10-valve 2.0 and 2.5-litre five-cylinder power, plus more powerful light pressure turbo and 2.5-litre 20-valve engines. More powerful still was the 2.3-litre T5 turbo, joined in June 1997 by even more powerful V70 T5 R models with and without four wheel drive. On-demand all-wheel drive had already been available to light pressure 2.5-litre 20v V70 estate buyers since launch, but here for the first time was all-wheel drive traction matched to the real power. And there was more to come. In August 1997, a serious 4x4 V70 was added to the range - the XC Cross Country, with raised suspension and a generally tougher look. Power came from the same 2.5-litre LPT engine used by the existing lowest-powered V70 AWD estate. An S70 LPT AWD was included in 1999's model line-up, before wider model year 2000 changes in the summer of that year. The 2.0-litre and 2.5-litre engines were replaced with 2.4-litre units from the larger S80 developing 140 and 170bhp. There was also a new 2.5-litre turbo diesel borrowed, as with the previous TDI engine, from Audi, while at the top of the range, the V70 R AWD got a pokier 165bhp engine. On the safety front, an anti-whiplash protection system was standardised across the range. The S70 saloon was phased out towards the end of 1999 and a limited range of V70 estates continued, with upgraded specifications, as the Classic line-up. These were offered for some months alongside the all-new V70, announced in January 2000 but available only as an estate. The Classic was eventually phased out late in 2000.

As with the smaller S40 and V40 line-up, 'S' stands for saloon, while 'V' (for versatile) designates the estate. If you haven't tried a modern Volvo recently, you should find the styling inside and out a little more adventurous than older examples of the marque. The look is more purposeful and the quality of the plastics and fabrics - even the click the switches make - is all a match for anything you'd find in an Audi, a BMW or a Mercedes. As we've said, the S70 and V70 models are of course, direct descendants of the superseded 850 line-up, part of the range which first proved that Volvos could appeal to drivers as well as passengers. In S70 and V70 guise, that dynamic aptitude has been matched by a smarter look. The front grille is low and rounded, the nose sleeker with slimmer headlights. Equipment levels are comprehensive. Most examples feature air conditioning with climate control, electric windows front and rear, an outside temperature gauge, a quality stereo system and internal releases for the fuel flap and boot. The V70 is the spacious load carrier you would expect a Volvo estate to be. Lifting the rear hatch reveals some 792 litres of luggage capacity - or 1580 litres with the rear seat folded. Some cars will have the optional fold-out third seat bench in the estate compartment. 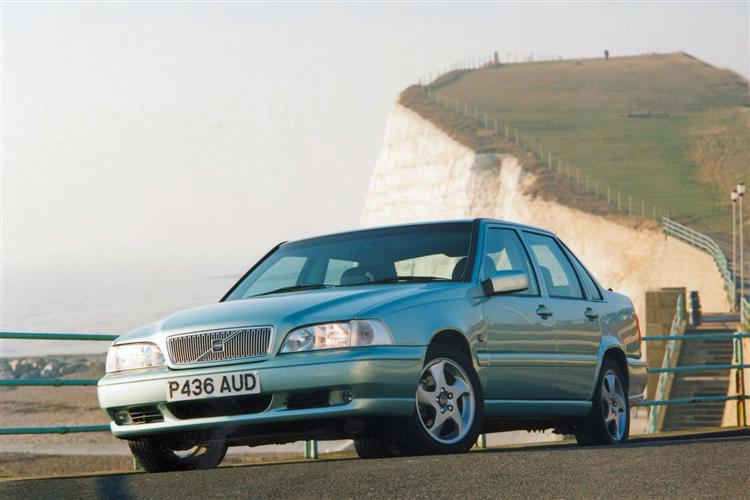