Be honest. Your perception of a Mercedes-Benz is probably much like everyone else's; a large, luxurious saloon, ideal for cruising, continental blasting and parking at the local golf club. If you're looking for a used example, that's probably what you have in mind. Fair enough, as long as you remember that Mercedes-Benz is also purveyor of some of the world's finest - and fastest - sports and specialist models, the swiftest of which are tuned by German specialists AMG. A few E-Class and SL models have made it to the UK complete with the AMG touch but the majority of used AMG Mercedes models tend to be the C-Class-based C36, a car replaced in February 1998 by the quicker C43. Both offer all the traditional Mercedes-Benz values as standard but have an added touch of mature exuberance. Put simply, chameleon-like qualities come as standard. To change from sober suit to sports jacket, simply put your foot down.

The potent AMG C36 was introduced in July 1994 as flagship of the successful C-Class range. Unlike its C-Class stablemates, it was offered only in one pricey but complete package, including standard automatic gearbox, classy AMG alloy wheels, skirts and spoilers bodykit plus a complete specification. Numbers were limited. A five-speed automatic gearbox and standard cruise control were added in August 1996 and the car was eventually run out with the C-class facelift in the summer of 1997. Mercedes super saloon fans then had to wait until the following year for the introduction of its replacement, the 4.3-litre V8-powered C43, which included all the refinements of the updated C-Class range. This car was also offered in estate form, a version which continued for six months when the saloon range was phased out in autumn 2000.

What You Getword count: 84

Equipment levels include just about everything - as you'd expect for the money. Power steering, central locking, retractable rear head restraints, anti-lock brakes, twin airbags, AMG alloy wheels plus, on later models, cruise control - and the list goes on. Every example started its life at the Mercedes factory in Sindelfingen but from then on, the input came exclusively from AMG. Visually, the clearest evidence was the purposeful body kit, though from a technical point of view, the underbody changes were far more significant. 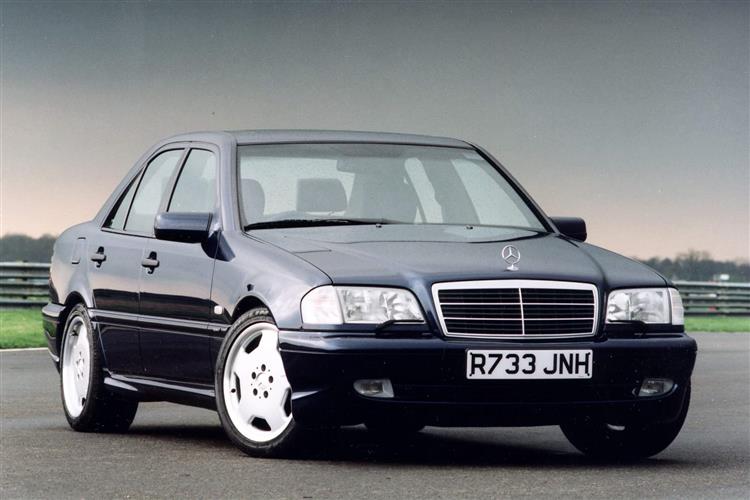