The Daewoo Musso is one of those vehicles that appear almost too cheap. With new rivals such as the Nissan Patrol, Isuzu Trooper and Land Rover Discovery costing thousands more, the Musso prompts the question "How on earth are they making a profit?" They in this instance are Daewoo, now one of the world's biggest automobile manufacturers and capable of turning out packages that make rivals quake in their boots. As a used buy, the Musso represents a cost-effective way of owning a good looking 4x4 at prices that'll leave enough change to load it up, go skiing, and still be left to count the change. With a range of Mercedes-Benz sourced engines, you won't have to concern yourself with exotic unproven technology either. Whatever way you look at it, a used Musso is an interesting option and one which is underrated by many.

If by chance you feel the Daewoo Musso has a certain familiarity about it, you'd be right. That's because the Musso wasn't always a Daewoo. When it was launched in 1995, it was marketed by Ssangyong, who in turn were subsumed by the Korean giant in 1999. It had sold in the UK in steady but unspectacular numbers under the Ssangyong banner, but was hampered by high prices and an unspectacular equipment list. When Daewoo took up the reins in 1999, they had a product with some potential on their hands. Winner of two UK Auto Design Awards, the Musso was styled by Ken Greenley, then head of automotive design at the Royal College of Art. Keen to impose the Daewoo family look but keep the sleek styling, a number of small but significant changes were made. A more imposing chromed grille was introduced, with the obligatory jewel-style headlamps. Oversized foglamps were integrated into the new bumper and new tail lights were also penned. The changes were very successful, and now give the Musso a far stronger identity. The equipment list for the Musso was also beefed up considerably. Ssangyong models first arrived in May 1995, with the 2.9 diesel model in standard, SE and GSE trim levels. June 1996 saw this 94bhp engine uprated to 99bhp. In January 1997, the unusual GX220 model was launched. This boasted a 3.2 litre Mercedes sourced petrol engine, and with 217bhp available was notably quick off the mark. The 2.3-litre engine made its debut in August 1997 in 2.3 GLS guise, whilst in January 1998 2.9TD GL and GLS trim levels were announced. As sales slumped in 2000 and 2001, the range of available choices was rationalised. In order to simplify the choices available, there was an option of either the 2.3-litre petrol version or the 2.9-litre turbo diesel. Straightforward and easy to understand. It wasn't enough. The Musso passed quietly away in the Autumn of 2002.

The Musso is one of the first 4x4 vehicles to look remotely sleek. The angle of the windscreen is raked back to give a purposeful, sporty image, at odds with the barn-door design of many of its rivals. The Ssangyong models are slightly bland around the grille area, a problem which the Daewoo badged cars have rectified handsomely. Parked next to a Nissan Patrol or Land Rover Discovery, the Musso looks a classier, more expensive piece of equipment, possibly even in the Range Rover or Toyota Land Cruiser bracket to the uninitiated. In practical terms, the Musso also makes sense as long as you don't need space for seven. That's impossible due to the fact that, unlike many competitors, you don't get occasional seats in the luggage compartment. Still, there is ample head and legroom for five people. Another point worth making is that, at only 67.7 inches high, it's still able to scrape aboard `Le Shuttle` (unlike some other 4x4s), should you wish to venture across the Channel. Another unusual feature is that the rear seat is set higher than those at the front. This novelty, copied from Korean executive cars unseen in Europe, was adopted to give rear passengers a better view. Other useful features include an intrusion-free 1120-litre, luggage compartment and split/folding rear seat. You'll also find Daewoo Mussos well equipped with remote central locking, revised alloy wheels, anti-lock brakes, electronic traction control and semi-automatic air conditioning. These features are on top of the existing items carried over from the Ssangyong era: all-round electric windows, heated, electric mirrors, a leather-covered steering wheel, power steering, tinted glass, an engine immobiliser and an RDS stereo radio cassette player. More importantly perhaps, in Daewoo form, the Musso gets the marque's renowned comprehensive 'customer package'. This includes three years' free servicing, warranty and breakdown cover, making a nearly new Musso a safe and cost effective purchase. 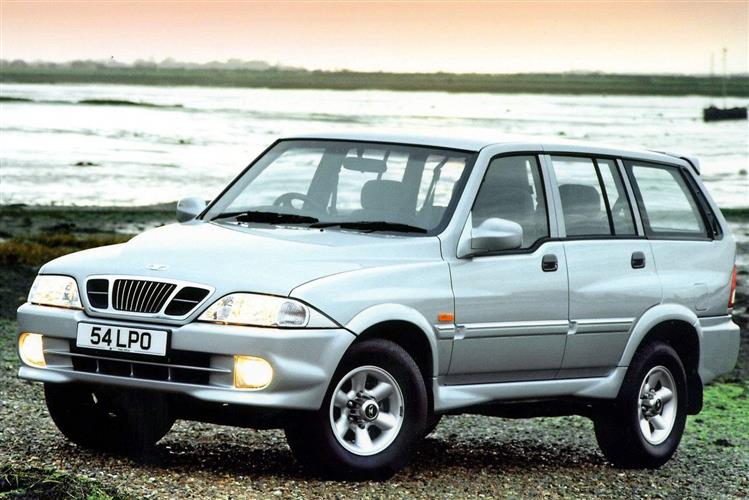