CHUCK OUT THE CHEST WIG (some text hidden)

There aren't too many secrets left in the world of performance cars. By and large we know where the bargains can be found, what the best money-no-object dream cars are and where you'd turn if you wanted something that could lap the Nurburgring in under eight and a half minutes. That's the obsessive nature of the enthusiast. There is, however, one car that has slipped under their collective radar. It's the Toyota Supra Mk IV, manufactured from 1993-1996. Available in plentiful numbers on the used market, here's the performance bargain to end all others.

It's fair to say the Mk IV Supra didn't have a lot to live up to when the first models were road tested here in the UK in early 1993. Its predecessor had developed a reputation as something of a chest wig chariot, a whale of a car beloved by third division footballers and dodgy building contractors. Few saw what was about to hit them. An early clue came in the form of an Autocar magazine road test entitled 'The Fastest Cars of 1993' which included then fresh luminaries such as the Porsche 911 Carrera, the Lotus Esprit, the Lotus Esprit Sport 300, the BMW M3, the Caterham Supersport and the Toyota Supra, looking a trifle self conscious with its huge spoiler and Christmas tree decoration tail lamps. But after days of testing, the staffers decided that out on the public road, in all weather conditions, the Supra was the quickest of the bunch. Other magazines soon joined in, lauding this extraordinary car. But the Supra still didn't catch the imagination of the British public in the way the Subaru Impreza and then the Nissan Skyline did. Yes, it sold steadily, remaining largely unchanged until its demise apart from the introduction of a CD autochanger in September 1994. Most cars you'll find will feature the optional automatic transmission. The Supra died quietly in late 1996. Toyota, like rivals Nissan and Mazda, found that small, if steady sales of big and heavy supercars were simply not worth the marketing costs. It was only with the boom in Japanese imports that the Supra enjoyed an unlikely second coming.

What You Getword count: 181

The UK-spec Supra is the brainchild of Toyota's Isao Tsuzuki, the man behind the first two generations of Toyota MR2. He didn't do a bad job. The cabin feels snug for two with a high window line and a dashboard that arcs round to point most of the instruments at the driver. The driving position is very good with a spacious footwell and supportive seats. The low steering column and awkwardly placed handbrake are the only minor annoyances. In the UK there was only ever one model released, namely the twin turbo. This had a very high specification with leather interior, cruise control and active spoiler. The UK version also had a large air intake in the middle of the bonnet and headlamp washers which make it stand out from the import versions. Of course, a car that debuted in 1993 isn't going to be the cutting edge as far as cabin styling is concerned and the interior does major on black plastic. Space in the rear is best described as token, although there is a large albeit shallow luggage bay. 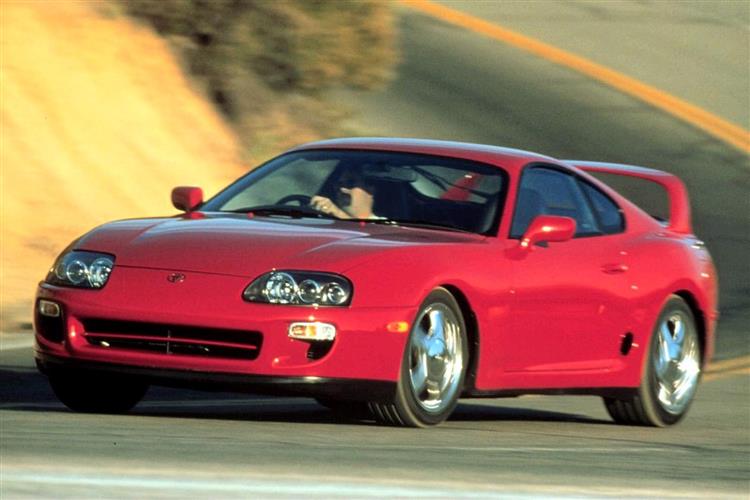