BMW's biggest, the Seven series, introduced just as the roaring Eighties were getting into full swing, launched the company into the big time. The first 'Seven', which dates from the late Seventies, never quite cut it in the executive car park prestige stakes. In contrast, the replacement model's fine-handling chassis and high-tech engineering put the big BMW firmly into Mercedes and Jaguar territory. For the first time, the Bavarians had built a big car without compromises. The 'Seven's' handling and ride changed people's minds about big BMWs - no longer were they seen as unpredictable, hard-riding and unreliable. Which was just as well, since the Seven arrived in late 1986, just in time to challenge Jaguar's new XJ40 for the luxury car crown.

The first cars reached the UK in November 1986. There were two six-cylinder models at launch, a 3.0-litre 730i and a 3.5-litre 735i. The V12 750i and 750iL (long wheelbase) arrived in late 1987 and offered true supercar performance. Top speed was electronically limited to 155mph, surpassing Jaguar's XJ12 models. Both six and twelve cylinder cars came well-equipped with trip computer, electric windows, mirrors and seats as well as ABS. The launch of the Lexus LS400 with its standard 4.0-litre V8 caused all the luxury car makers to introduce new, smoother powerplants to equal the standard set by the Japanese newcomer. BMW replaced the Seven's original engines in June 1992 with new three and four-litre V-eights, called 730i and 740i. The 750i and L continued unchanged Changes were few over the life of the model. A driver's airbag arrived for the 750 in early 1992, but not until September 1993 for the other models. A replacement 'Seven' arrived in 1994. Initially, there were 3.0 and 4.0-litre V8 engines (these were replaced by uprated 3.5 and 4.4-litre V8 units in 1996 but the badge designation stayed the same). A V12 5.4-litre 750i flagship arrived in December 1994 and a 2.8-litre entry-level 728i variant in 1996. In autumn 1998, the range was subtly revised with a new front end. The 728i version had BMW's latest double-VANOS six cylinder engine and equipment upgrades were made across the range.

All the luxury and gadgets you could possibly want, and then some. Try radar parking-sensors built into the back bumper of some models... What attracted most buyers to the Seven was its solidity with a dash of sportiness - often lacking in some of its rivals. You can throw the big BMW around and it won't bite back, unlike its predecessors. 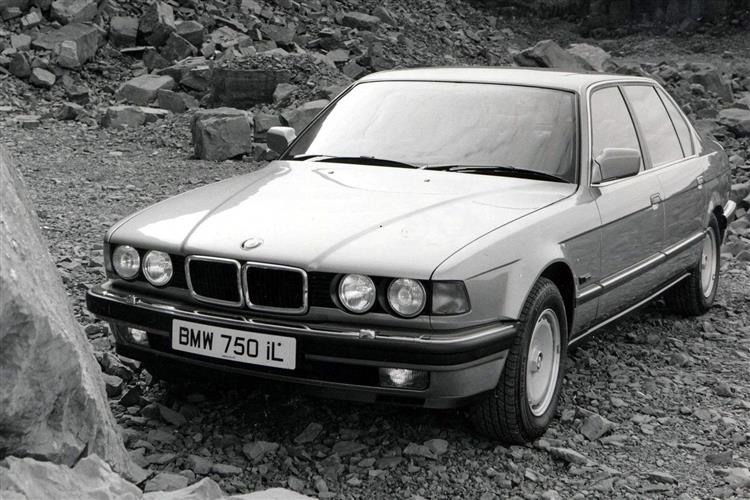