GOING TO WORK WITH A SAWN-OFF (some text hidden)

The BMW 3-Series Compact is a car that has had a mixed reception in the UK. Many saw the car as a cut-price, outdated BMW for those suckered by the blue propeller badge on the bonnet. Others saw it as an entertaining alternative to the standard hot-hatchback fare. Whichever camp you find yourself in there's no denying that, even with the entry-level models, you're buying into all of the quality and depth of engineering for which the Munich firm have become renowned. As a used buy, the Compact opens BMW ownership up to those who were previously looking at far more mundane transport. A good thing or not? You decide.

Sniffy press reaction haunted the 3 Series Compact from the moment of its launch in late 1994. In a bid to cut complexity, BMW had ditched the clever multi-link rear suspension of the (then) current 3-Series saloon range in favour of the less advanced semi-trailing arm arrangement as used on the E30 series cars from the eighties and nineties. Whilst many thought this was cynical cost-cutting and evidence of an inferior product, the truth is that the original E30 BMW M3, renowned as the best M3 variant to date, used this setup and was none the worse for it. It even carried on in the M-Roadster and M-Coupe models, both cars which could hardly be accused of having prehistoric handling qualities. The range consisted of a 1.6-litre 102bhp 316i and a 1.8-litre 140bhp 318ti. In September 1995 a diesel model was added to the range, the 1.7-litre 90bhp 318tds. April 1996 saw the 318ti fitted with a 1.9-litre 140bhp engine, and in September 1996 the range enjoyed a mild facelift, which included a revised grille, bumpers, mirrors and lights. Some minor changes were also made to the interior, including a lockable glovebox, lights in the footwells and an extended choice of upholstery types. A 318ti Compact Sport was launched in February 1998, and in early 1999, the 316 Compacts received a detuned version of the 318ti's 1.9-litre engine, producing 105bhp. Summer 1999 heralded the launch of the 316 Compact Sport, and SE trim level for the 316, 318ti and 318tds.

There are of course differences under the skin between the 3 Series Compact and its saloon basis. Don't lose any sleep over them though, unless you really don't want to be limited to the Compact's three-door only bodystyle. This car remains every inch a true BMW and you'll feel it every time you slam the door and slide behind the wheel. Apart from the door count, the most obvious difference is the Compact's unique fascia. In essence, it's the same as the old-shape saloon's, but this is a different moulding, one that contrives to look cheaper without being cheap, a sentiment which could be said to sum up this car's entire philosophy. The simpler suspension arrangement of the Compact has liberated a significant amount more space in the loading bay than would otherwise have been the case and the result - a generously proportioned, well-shaped boot - speaks for itself. Of course, the fact that the older layout is 10% cheaper to produce is merely a beneficial aside! BMWs are better specified than they used to be. Even the entry-level 316i Compact gets anti-lock brakes, a driver's airbag, seat belt pre-tensioners, side impact protection, a vehicle immobiliser, central locking with deadlocks and a three year warranty. The crucial thing is that especially as a used purchase, it's no longer a variant that dealers need apologise for. 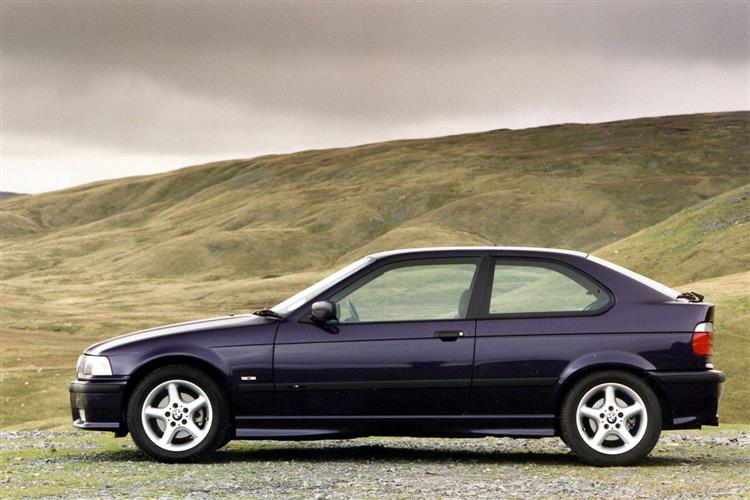