There's nothing wrong with manufacturing a 'me-too' twist on the mini-MPV as long as it brings something new to the party. The Vauxhall Zafira had seven seats, the Honda Stream boasted hot hatch style handling and the Fiat Multipla went for three abreast seating and looks that could curdle milk. Daewoo relied on the tried and tested method of offering good value for money. Mini-MPV drivers appreciate saving money. It's no coincidence that UK buyers took the Citroen Xsara Picasso to their hearts just at the time that thousands of pounds vanished from its sticker price. Deduct a similar amount from a used Tacuma's asking price and they'd be paying you. A slight exaggeration maybe, but if you're after an inexpensive pre-owned mini-MPV, a Tacuma is a great place to start the hunt.

Arriving in the UK in September 2000, the Daewoo Tacuma rapidly established itself as one of the marque's better offerings and hit the showrooms at a particularly good time for mini-MPV sales. It was initially available in two distinct guises, 1.8 SE or 2.0-litre CDX, the larger-engined car being offered with an automatic option. The paltry £1,000 new price differential between the two models made the 2.0-litre CDX manual the volume seller - that is until summer 2001 when Daewoo recognised that perhaps the 1.8-litre car was a touch pricey and responded with the Xtra Special Edition which not only added additional equipment but also shaved £1,500 off the new price. The Tacuma was revised in early 2004 with a more elegant front grille marking out the newer car. This car continued with Chevrolet badges after Daewoo was taken over but the last new Daewoo model was sold by early 2005.

What You Getword count: 403

Standard kit includes air conditioning, ABS, twin airbags, remote auto locking, an immobiliser/alarm, front fog lamps, electric windows and body-coloured mirrors and bumpers. If you want more, the 2.0-litre CDX variant includes alloy wheels, electric rear windows and a better stereo system. All for not much more than you'd pay for the slowest, most basic 1.4-litre Renault Scenic. Perhaps it's not a fair comparison especially when considering the Tacuma Xtra. After all the Daewoo comes with 15-inch alloy wheels, and a six-CD autochanger. Try finding that on any base model Scenic. So, a decent family package for the money - but then you'd expect that from Daewoo. The problem is that you might also expect a down-market interior and compromises in the kind of versatility that the European models have made their own. If that's the case, than a seat in the showroom might bring the odd pleasant surprise. For a start, the materials used are a cut above those we've seen before from this company, even of the overall feel of the cabin remains dominated by unwelcoming dark plastic. There's useful versatility too, despite the fact that 'only' five seats are on offer (as opposed to the potential - but cramped - six in the Carens and seven in the Zafira). All the usual mini MPV touches are in evidence: five individual seats (multi-adjustable with armrests in the front), storage drawers underneath the two front seats, airline-style flip-down trays for rear seat passengers, little cubby holes under the rear floor and a rear middle seat that can be folded flat to create a picnic tabletop. Nice touches include the way that the front passenger seat can swivel to face those at the rear to facilitate family conferences and the way that the centre rear seat can slide forward by 120mm to increase shoulder room for passengers in the outside pair of seats. An irritating feature however, is a rear parcel shelf which cannot be removed or re-fitted without first folding the back seats forward. One advantage of choosing a five-seat mini-MPV rather than one with six or seven chairs is that luggage space is likely to be good. Nor does this Daewoo disappoint in this respect, with 455litres of loadspace, a figure that rises to 1155 litres with all three rear seats tumbled forward. Unfortunately however, there's a high loading lip to overcome before you can get to the space on offer. 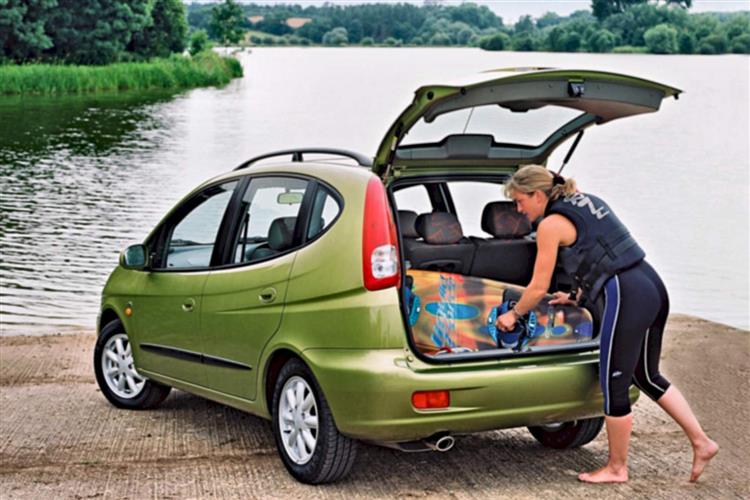