Renault's contribution to the face of modern family motoring should be underestimated. Not only did they popularise the 'people carrier' when it launched the Espace in the mid eighties, it also did much to create the mini-MPV genre with its Scenic. Purists may sniff, noting that the Chrysler Voyager and Toyota Picnic were already performing these functions, but it was Renault who truly brought the concepts to the masses. Late shape Scenic models may have lost the number one sales slot but they still have a great deal to offer the used buyer looking for a quality item that won't cost the earth too run.

Although the Scenic designation first saw the light of day way back in May 1997, it was tagged onto the rump of the Megane range, being dubbed the Megane Scenic. It wasn't until this model achieved genuine sales momentum that Renault realised quite what a winner they had on their hands with the Scenic sub-brand. Hugely popular with families who either didn't want or couldn't afford a full-sized MPV but for whom a traditional hatch or saloon didn't quite cut it, the Scenic became a model in its own right in June 1999. Visual improvements were mainly to distance the Scenic from its Megane stablemates and establish it as a model in its own right. Hence the more rounded nose with large vertical lamp clusters and, at the rear, a smoother look intended to make the car look wider. All the seats now slid around on rails and there was a redesigned glovebox plus useful trays under both front seats. Air-conditioned models got a large chilled storage box to keep drinks and chocolate cool while plusher models had an opening tailgate window so you could load smaller items without having to struggle with the rear door. There were new engines, too; apart from the 1.9 dTi direct injection turbodiesel, all the powerplants were fresh 16 valve petrol units. Buyers chose from a 95bhp 1.4-litre, a 110bhp 1.6-litre and a 140bhp 2.0-litre. ABS and rear disc brakes became standard along with side airbags and ISOFIX seat mountings for the latest baby seats. There was also a wider choice of trim levels including Alize, Sport and Sport Alize. February 2000 saw the introduction of the 1.9dCi common rail turbo diesel in place of the older dTi unit. In June 2000, the 2.0-litre petrol engine and 1.9dCi diesel were offered in a new variant, the RX-4, intended as a 4x4 off roader for people who don't like off roaders but live an 'active' lifestyle. In 2001, a series of revisions to the Scenic range saw it attempt to regain its number one sales position. Trim levels now ran from Authentique, Expression and Dynamique to Privilege and Privilege Monaco. Plus packs were also available for all models bar the Authentique and Privilege Monaco.

What You Getword count: 428

Trim levels in the standard range run from Authentique, Expression and Dynamique to Privilege and Privilege Monaco. Plus packs are also available for all models bar the Authentique and Privilege Monaco. Authentique opens things with a choice of 1.4 and 1.6-litre petrol engines and the 80bhp 1.9dTi turbo diesel. Opt for the Expression and you get the choice of an automatic transmission for the 1.6, a 1.8-litre 120bhp petrol plus the 105bhp 1.9 dCi common rail diesel. The Dynamique features a 110bhp 1.6 16v engine, the 1.8-litre unit and a 140bhp 2.0-litre 16v plus the dCi common rail diesel. It also features 16-inchalloy wheels, fog lamps, electric rear windows and leather covered steering wheel and gearknob. Privilege adopts a luxury approach, utilising the same engines as the Dynamique only with a better alarm, roof bars, rear sunblinds and a rear centre armrest. The Privilege Monaco, in Renault tradition, adds a soft leather interior at prices which start at £15,770. What the Scenic illustrates so effectively is that it's not about the number of seats you have; it's what you can do with them and the cabin space around that's important. So what can you do in a Scenic that you can't do in an ordinary family hatchback - or a Zafira come to that? Well, there are three individual rear seats instead of the usual bench that condemns the middle passenger to an uncomfortable perch. And (unlike the Zafira) you can take all of them out (nor do you have to be a weight lifter in order to do it). If you don't fancy that, then you can slide them around so, for example, the middle seat sits ahead of the other two. While you're at it, you might like to fold the thing in half to create a picnic table. Or take it out altogether and replace it with Renault's (optional) tailor-made storage box-cum-fridge. All three of the rear seats have three-point seatbelts (again, an advantage over the Zafira) and you can recline them right back into the load compartment should you so wish. Indeed, if luxury is important and you're only travelling four up, then you can remove the centre rear seat and re-position the other two so that there's more space for the occupants to move about. Other clever touches? Well, the double-layered floor means that there are natty floor storage compartments both underneath and in front of the rear seat passengers. You also get picnic tables built into front seat backs and bottle holders front and rear, along with four deep storage door bins. 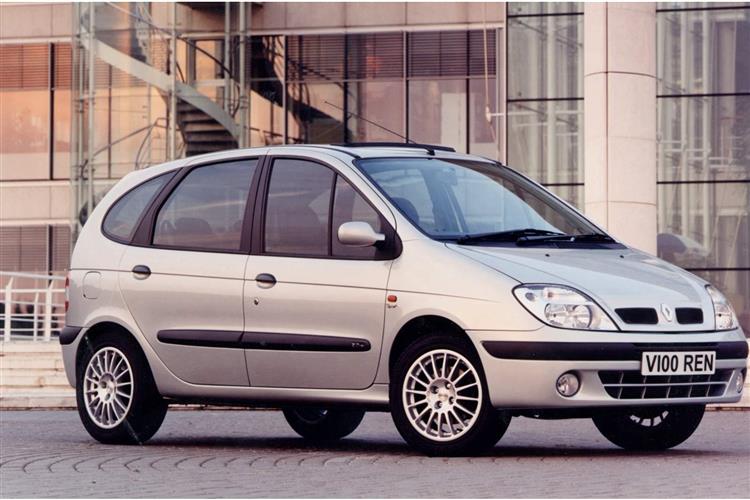