COULD YOU LOVE A LACETTI? (some text hidden)

Perhaps we should have been prepared for the Lacetti, given that the Nubira that preceded it boasted a rather slinky shape and some very neat detailing. Despite that precursor, the Lacetti still caught many of us on the hop, unaccustomed as we were to a Daewoo that didn't look like a mish mash of other manufacturer's cast offs. With neat, well resolved styling and a simple value proposition, the Lacetti has quietly done very well, and picking up a low mileage used example is a great way to land a modern hatch for a lot less than you may have been bargaining for.

A lot was riding on the Lacetti when Daewoo started the planning process. The company had just emerged from a troublesome period and the benefits of General Motors' investment, know-how and marketing muscle were starting to bear fruit. Lacking a credible contender for some time, it was vitally important for Daewoo to establish a meaningful presence in the family hatch sector. To date, their attempts at penetrating this potentially lucrative UK market had met with limited success. The Nexia and its successor, the Lanos, never campaigned on anything but lowest common denominator pricing, but the Lacetti could stand toe to toe with some of the more established family hatch favourites. Of course, Daewoo are realistic about their brand image and expecting the Lacetti to duke it out with the Volkswagen Golf isn't realistic. Nevertheless, pricing is a lot closer to the Ford Focus and Vauxhall Astra mainstream than previous Daewoo fare. By the time the Lacetti hit the dealers in March 2004, prices were pegged at £9,495 for the 1.4SE and £10,495 for the 1.6SX. A 1.8-litre Lacetti Sport debuted at the 2004 British Motor Show but never made it to UK showrooms - at least not with a Daewoo badge. In October 2004, GM announced that the Daewoo brand would from 1st January 2005 be rebadged 'Chevrolet'. So it was that the Lacetti entered into a new existence less than a year after it was originally launched. As well as the hatch versions, GM decided that the Nubira saloon would also wear a 'Lacetti' badge, creating a wider 'Chevrolet Lacetti' range.

What You Getword count: 284

Styled by Italdesign, the Lacetti certainly doesn't smack of something bargain basement. Daewoo have forged quite a relationship with this design house, having been extremely happy with the styling work performed on the Matiz citycar and the Kalos supermini. The Lacetti's shape is well resolved; a purposeful wedge with strong shoulders and a very pert rump. The wheel at each corner look not only gives a dynamic stance but also maximises internal space. When new in 2004, prices started at £9,495. Break out the tape measure and you'll find that the Lacetti's wheelbase is a full 2600mm long, longer than cars like the Alfa 156 and the Audi A3. Given that most cars in the Mondeo class campaign with a wheelbase of around 2670mm, you'll appreciate that the Lacetti offers a surprising amount of room for a 'compact' car. With 932mm of rear legroom and 275 litres of boot volume, you'll not feel claustrophobic in the back of a Lacetti. Fold the rear bench down, keep a keen eye open for animal welfare types and you'll be able to swing a generously sized cat in the 1,045 litres of fresh air at your disposal. The rear light clusters are an interesting design feature, bisected as they are by the shutline of the hatchback, and the stub tail and roofline of the car look very much like a Vauxhall Astra -which may be something less than a coincidence. The almond-shaped clear glass headlamps and well-defined wheel arches are signature post millennial design features and the Lacetti looks the part even in traditionally frumpy five-door guise. A three-door model was never offered which is something of a shame, as this would have been quite a looker. 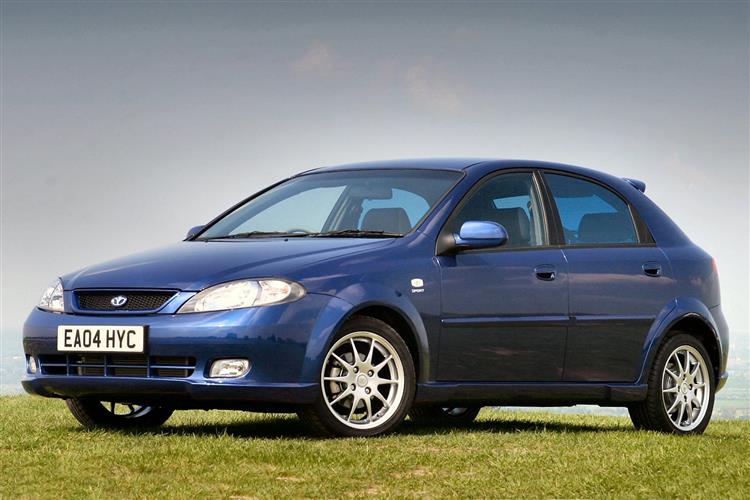