If asked to identify how the BMW 3-series coupe differed from its humbler saloon origins, most would point to the obvious - a deficit of doors. In fact BMW go to great lengths to point out that the BMW badge, the door handles and the side indicator lenses are the only visible parts shared with the saloon. Sure enough, park the two cars side by side and the differences become apparent. It's just this sort of attention to detail that have given BMW their reputation as one of the most bulletproof used car purchases around, with correspondingly implacable residual values. The Coupe is in high demand, so you'll have to be prepared to fork out for your fun.

Coupe versions of the BMW 3-series stretch right back to the model's birth in the early seventies, and before that to two-door versions of the '02 series in the sixties. With this generation of 3 Series, designated E46 by BMW, the company delved into its heritage to revive the 'Ci' moniker, first used in 1965 to denote BMW's sports coupes. Upon launch in April 1999, the range consisted of two models, the 170bhp 2.5-litre 323Ci and the 193bhp 2.8-litre 328Ci. Both cars featured the silky-smooth straight six-cylinder engines that, despite the increasing prevalence of V8 and V12 engines, still represent something of a trademark for BMW. An entry-level 318Ci model was introduced shortly afterward, powered by the same 1.9-litre four-cylinder engine that buyers had been used to in the previous generation 3 Series and the Z3 roadster. In summer 2000, the Coupe range was fundamentally reconsidered, with a new selection of engines being ushered in. The entry-level 318Ci remained largely unchanged, but most 3-series Coupe customers seemed to be opting for six-cylinder power. Hence there was now a four-way choice which started with the 2.2-litre 170bhp unit powering the 320Ci. The previous 323Ci and 328Ci models were replaced by 325Ci and 330Ci variants, the new badging indicating the installation of an impressive 192bhp 2.5-litre engine in the 325Ci and a potent 231bhp 3.0-litre engine in the 330Ci. The range received an additional injection of panache with the unveiling of the awe-inspiring 343bhp M3 model, marking a return to the M-car's early days of big spoilers and even bigger attitude. A 330Ci Clubsport model was introduced in early 2002 to bridge the gap between the M3 and the rest of the two door range. A 360bhp M3 CSL was introduced in summer 2003, saddled with a monster £58,445 price tag. The £ Series Coupe took a new tack in summer 2003 with the launch of the diesel engined 320cd. Although Mercedes had some track record in coupes that drank from the black pump, this was BMW's first effort, paving the way for the 330cd model.

Despite the initial similarity, there's a myriad of differences between the coupe and its saloon sibling. The Coupe is lower by 46mm, longer by 17mm and wider by 18mm than the saloon. The windscreen has been raked back a further two degrees and the rear window slope is steeper, making the Coupe's roof both shorter and flatter. The front grille is more purposeful, bigger intakes reside in the deeper front spoiler, and even the headlights and bonnet show subtle differences. The mirrors are broader and lower in profile, with five knuckle-like fins atop each, designed to reduce wind noise. At the back, the bootlid has been reprofiled, robbing the Coupe of 30 litres of boot space compared to the saloon. As well as cosmetic alterations, the suspension has come in for a rethink, with the optional Sports pack offered on the saloon standard fare on the Coupe, dumping the ride height by 15mm. Standard suspension can be specified as a no-cost option or M-Technic suspension as a considerable-cost option. Inside, the generous shoulder, elbow and legroom mark the Coupe out as a proper four seater. Rear seat access is easier thanks to front seats that not only fold and slide forwards but actually lift off the floor to make entry even easier. Equipment levels are high, including twin front, side and head airbags, a remote control alarm, electric seats, alloy wheels, air conditioning and 60/40 split-folding rear seats that can be unlocked from the boot. 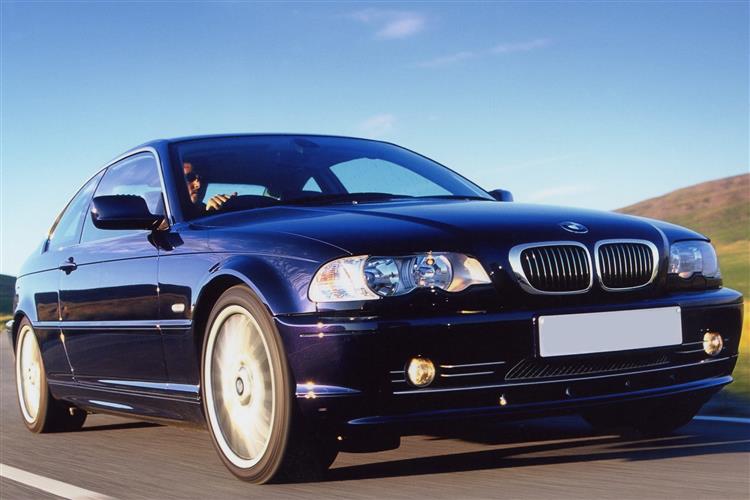