The frustrating thing about most so-called `Concept Cars` is just that - they're concepts. By the time the thing goes into production, the odds are that it will bear about as much resemblance to the curvy model you saw at the Motor Show as your cleaning lady does to Cindy Crawford. Recent years, however, have seen a change of heart from the major makers, prompted mainly by the Japanese. They've shown that the `lifestyle` market, where it isn't necessary to please Mrs Jones from Surbiton (who "doesn't want anything too radical, dear") is just crying out for cars that look as if they've just come off the stylist's drawing board. One such is Vauxhall's Tigra, launched in November 1994, following a rapturous reception to its appearance as a motor show concept car the year before. Though the car was based entirely on Corsa mechanicals, it was great looking and paved the way for a huge upsurge of interest in the small coupe market. Now it's available in increasing numbers on the used scene.

Original buyers chose between 88bhp 1.4-litre and 104bhp 1.6-litre power (the Corsa GSi engine). An automatic option for the 1.4 was added in February 1995. Little was done to the car throughout its life, though late in 1997, Lotus-influenced changes to sharpen up the handling were introduced. There were plenty of special editions, with names like Verde, Blue, Marine, Bermuda, Chequers and (in bright yellow) MTV Summertime. GM stopped producing the Tigra in 2000 but sales of old stock continued until early 2001.

An excellent alternative to a boring supermini for not much more money. And a car that, from the outside at least, looks a great deal more expensive than it really is. Climbing inside the cabin brings you back down to earth; behind the wheel, it's pure Corsa. Nothing wrong with that of course; everything's well laid out and functional. Just a bit of a contrast, that's all; it's like admiring a Ferrari, climbing inside and waking up with a start, realising that you were dreaming in your Vectra in an M1 traffic jam. Opt for the 1.4 and you get power steering, a stereo, central locking, electric front windows and tinted glass. If you can stretch to a 16v 1.6, there are gorgeous alloy wheels, a passenger airbag, a special alarm, an electric sunroof, heated and powered door mirrors, anti-lock brakes and front fog lamps. I'd buy a 1.4 and pay extra for the wheels (though you'll find that many cars will already have them fitted). 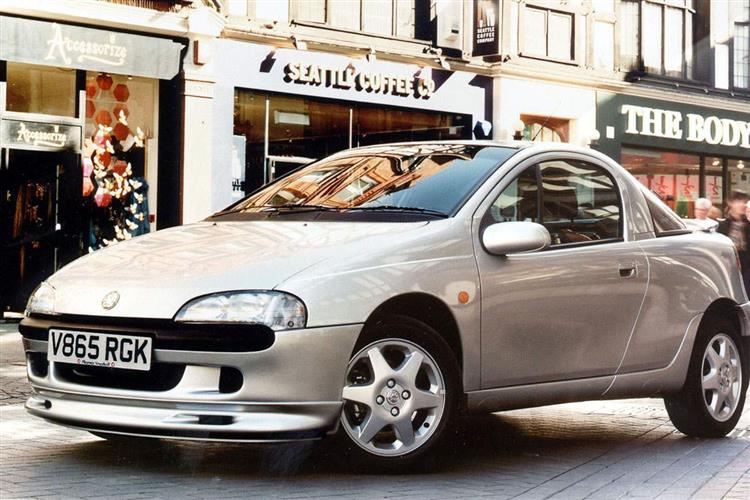