Who would have believed that Volkswagen, a marque renowned for solid virtues and no-nonsense products would visit such automotive subterfuge upon us as was witnessed when the Volkswagen Golf Cabriolet was launched in 1998? Although its sleek nose looked for all the world like a current Mark Four Golf, it was in fact the equivalent of a motoring Botox'n'laser job, for beneath the fresh face was the tried and tested Golf Mark Three. Still, find us anybody who'll finger the Mark Three as a bad car and we'll out them as traders looking to make a quick buck. As a used buy a Volkswagen Golf Cabriolet of any year is a sound bet. These Mark Three And A Halves if you will, are very much the Volkswagen Golfs of hatch-based cabriolets. Hang on a minute.

The Mark Three Golf Cabriolet had been with us since 1994 in various guises and had done good business for Volkswagen during its lifetime. Unfortunately it was also looking a bit dog-eared by 1998 when bold designs such as the Ford Focus were starting to hit the market. Recognising this, Volkswagen developed the superb Mark Four version of the Golf and, in August 1998, unveiled a Cabriolet version. All seemed well until the prospective purchaser was given an overwhelming sense of dej vu when they dropped into the drivers seat. With a Mark Three dash looking back at them, the penny soon dropped that this version was merely one of the cleverest facelifting jobs ever. Forget Cher. She's got nothing on the Volkswagen Golf Cabriolet. Three different engines were initially available, a 1.8-litre with 75bhp, a new 100bhp 1.6-litre unit and the classic 115bhp 2.0-litre powerplant. The range was soon rationalised to just one engine, the 2.0-litre, and trim levels ran from S through SE, Avantgarde and Colour Concept. The Golf Cabriolet was finally deleted from Volkswagen's line up in early 2003.

What You Getword count: 447

Buying a Mark Three and a Half Cabriolet means getting the late shape nose with the same 'sparkling' four circle headlights that set off the Mark Four hatch. The taillights and bumpers are also borrowed and the result is a much sleeker on-road presence. Inside, however, the changes are much less pronounced, mainly because Volkswagen has had to retain the old Mark Three model's dashboard. Still, it is lifted by a chunky Golf GTi steering wheel and the company's now trademark blue instrument backlighting. As with the hatchback model, twin front airbags are standard but unlike the tin top, you have to pay extra for side airbags. On a practical note, there is at least the provision of the kind of large glovebox that ordinary Golfs have to do without. So what of safety? Well, as you might expect, the car is as strong as ever on this front. As well as the dual airbags and standard ABS, there's the kind of complete menu you'd expect from a Golf; crumple zones, side impact bars, anti-submarining seats and so on. Particularly useful are the ISOFIX-style child seat fixings, which eliminate the need to use seatbelts. Other rivals have some of these things of course, but somehow they just don't feel as solid. The sturdy rollover hoop is one reason, eliminating the 'scuttle shake' (body flexing) that usually affects drop-top cars. This is just as well, for it doesn't do much for the aesthetic looks of the car. Nor does the hood mechanism which, when down, sits proud of the bodywork, hindering rearward visibility. The roof is at least simple to operate, with electrical assistance in all but the entry-level 1.8S version. You simply release two catches (rather stiff on the last version I tried) and the whole thing should be completed in seconds. Moreover, tests have proved that this hood will insulate you from the elements better than that of any comparable car. What it boils down to is that this remains the only family hatchback-based soft top with build quality to rival cabrios from the next class up (the BMW 3 Series/Saab 9-3/Audi Cabriolet market). This may be why Volkswagen offers the Colour Concept flagship model - to try and bridge the gap between the two classes. Here, a colour-keyed exterior is complemented by Recaro seats trimmed in soft leather. Live with the open-topped Golf and it comes across as a remarkably practical companion. There's a proper glass rear screen with demister and a large enough boot to swallow a huge picnic hamper and all the trappings. For that continental trip, you can make use of the split/folding rear seats which offer access into the luggage area. 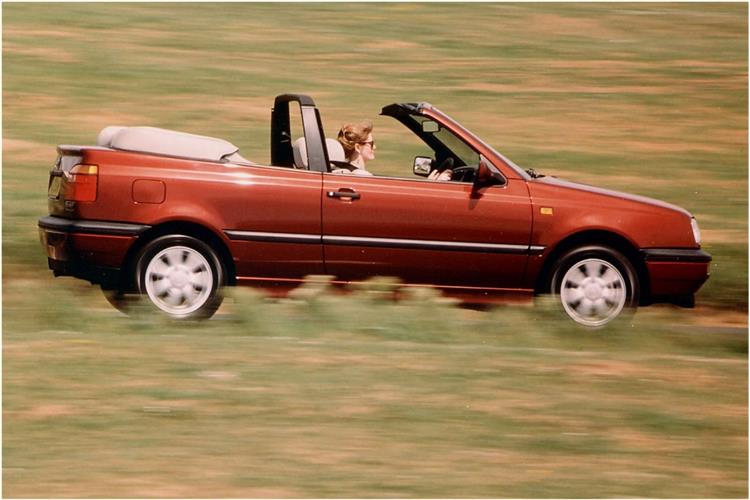