KEEP ON RUNNING (some text hidden)

The Toyota 4Runner has something of an image problem insofar as it doesn't have one. A stopgap model designed to plug a hole in Toyota's range until the Land Cruiser Colorado was introduced, the 4Runner was overshadowed by the runaway success of the Toyota RAV4. As a used purchase, you get all of the Land Cruiser's attributes with a more transatlantic look at a knockdown price. Now not only can you have your cake, but you can drive straight over it as well.

Anybody who thinks Land Rover is the king of 4x4 manufacturers obviously hasn't taken a good look at global 4x4 sales figures. They'll show that when it comes to building rugged off-roaders, Toyota have the market taped. Whilst that's largely down to indestructible Land Cruisers and destructible RAV4s, a significant portion of this pie is accounted for by the Toyota 4Runner. Big in Japan and huge in the US, the 4Runner has had a long history and continues to be one of Toyota's mainstay brands. In this country, however, we were afforded just a minor peek, decided it wasn't really our thing and reverted to our beloved Discoveries and Shoguns. Replacing the Land Cruiser II in November 1993, the 4Runner was offered in two guises, 141bhp 3.0-litre V6 petrol and 123bhp 3.0-litre TD turbodiesel. In October 1994, a very mild facelift resulted in a revision to the front grille, and the V6 model was discontinued in March 1995. At the same time the 3.0-litre turbodiesel was offered in two different guises, GS and a slightly plusher GX model. These trim designations continued until the 4Runner was axed in May 1996 to make way for the Land Cruiser Colorado.

What You Getword count: 458

The 4Runner is a muscular on or off-roader with seating for five and plenty of room for skis and equipment. They're not new now and even when they were, the design had been around a while. Nothing wrong with that, of course. It's just that if you'd regularly travelled in the Alps or The Rockies in the early nineties, then you might find get a sense of dej vu from the car's chunky looks. The 4Runner was around in other markets for quite a time but it took the UK 4x4 boom of the mid nineties and a hole in Toyota's range to bring it here. The V6 petrol or 3.0-litre turbocharged powerplants, high specification and £20-23,000 price tag pitched it directly against plusher versions of Land Rover's Discovery, Isuzu's Trooper and Mitsubishi's Shogun. It doesn't take much market research to discover that the ever-increasing number of customers buying these fashionable off-roaders don't get them dirty very often. No, what these people want is a stylish all-purpose carrier - a kind of glorified estate car in essence. With a commanding view of the road - or the countryside - the driving position is comfortable, although you'd never accuse it of being particularly luxurious. By modern standards the interior design is somewhat less than cohesive although you do get a lot of standard kit for your money - though on the entry-level GS Turbo Diesel, you obviously lack a few of the items standard on the other two petrol and diesel-powered variants. These include infinitely adjustable power steering, a six-speaker radio cassette, power for the sunroof, windows and mirrors, remote control central locking and a security system with alarm and engine immobiliser. Even the window in the tailgate is electrically operated. Though it can't offer the extra estate compartment seats of some of its rivals, the 4Runner does reveal itself as being a practical driving companion. Despite the ground clearance, side running boards and grab handles make getting in and out easy. The tailgate, meanwhile, drops down to allow easy loading and unloading and if necessary, can be left open to transport exceptionally long items. No need to worry about fragility either - the rear bumper is strong enough to be used as a step. Were the 4Runner cheaper and less luxurious, it would have competed directly with such as Vauxhall's Frontera and Ford's Maverick, a confrontation Toyota chose to abandon, undercutting them instead with its RAV4. With its macho American styling and big wheel arches, the big Toyota appeals to a certain sensibility. Unlike many of its contemporaries, it seems to be ageing better, and a used 4Runner still looks tidy, in a showy sort of way, avoiding the slightly shopworn look of many more familiar 4x4 faces. 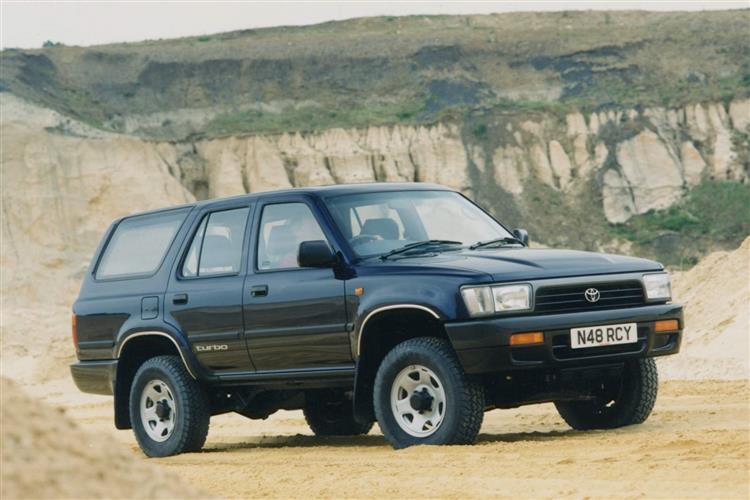