PARKING IS SUCH SWEDE SORROW (some text hidden)

Like many relics of the 1980s, the Dudley Moore film 'Crazy People' now appears horribly dated. After all, who could mention an advertising strapline like 'Volvo, boxy but good' nowadays? Yes, they're still good, but as Design Director Peter Horbury likes to joke, Volvo have now thrown away the boxes and kept the toys. No car epitomises this philosophy better than the Volvo V70 estate. Its predecessors were so ugly and dull to drive that they were nicknamed Swedish penalty boxes, whereas the V70 is all swoops, curves and studied elegance. Buying a used example means buying into the legendary reliability without sacrificing style or driver appeal. The best of all worlds? Volvo owners would have you believe so.

Volvo seemed to change the habits of a lifetime, when in January 2000, they launched the Volvo V70 estate. Puzzled motoring writers searched the press launch in vain for traces of an S70 saloon version, but the implacable Swedes from Gothenburg calmly stated that there wasn't one. To the uninformed, the V70 looks like an S80 estate, and indeed it was based on the same modular P2X platform, but it's some 110mm shorter and 30mm narrower overall on a wheelbase shrunk also by 30mm. Not a lot of difference then, but enough to drop their biggest estate one class size by Volvo's measurements. If you want a saloon, you either pay more to bag a Volvo S80 or you downsize to the S60. Upon launch there were a number of different variants to choose from. Several decent petrol engines are available, the 2.4-litre 140bhp unit carried over from the previous generation V70, as was the 170bhp version of the same engine. The 200bhp 2.4T engine was slightly uprated from the 'old' V70's 193bhp unit, and the 2.3-litre T5 variant, boasting 250bhp needs little introduction, coming from a long line of barking mad Volvo estates. Those after a diesel had a fine 2.5-litre turbocharged unit available. In June 2000, Volvo introduced the V70 Cross Country all-terrain version, aping the upmarket appeal of the Audi allroad and fitted with the 200bhp 2.4-litre petrol engine. Trim levels started out as base and SE, although in September 2000, the base model was redesignated the S, a policy that was replicated across the V70 range. Conventional 140bhp and 170bhp petrol engines were still available whilst a 163bhp D5 common rail 2.4-litre diesel appeared in summer 2001. The Volvo V70 Cross Country was renamed the XC70 in early 2002 and BiFuel versions of the 140bhp V70 were also offered. In 2003 Volvo launched the V70 R, a performance variant with no less than 300bhp under the bonnet. In 2004 a significant facelift was wreaked across the range. The key modifications most will notice were a more streamlined bumper and grille set with clear rear lights being fitted to all models. There were changes to interior trim and various snippets of new technology added. T5 also received a 10bhp boost to 260bhp. A further power boost was brought in for the 2006 model year with the D5 diesel given 185bhp. Despite this, the 163bhp engine continued in 2.4D form. Later in 2006, the SE Plus and SE Lux trim levels were introduced and a 178bhp 2.0-litre turbocharged petrol engine also became available. All models received wing mirrors with integrated indicator lights at this time.

The Volvo V70 is a traditionally solidIy-built Volvo with a vertical rear window capable of swallowing enormous loads. The shape is not the usual slab-sided box, however, with elegantly tapering shoulders running along the flanks of the car. It's said that Volvo's British-born design director Peter Horbury once penned a vehicle that combined a Jaguar E-type front with a Ford Transit rear. Luckily for estate car buyers, the new V70 is no such horror. Certainly the tail is squared off but if you want an estate don't you want load-lugging ability? And you get it, with Volvo claiming a rear-seats-down capacity of 1641 litres in a boot that is longer, wider and taller than that of the old V90, for so long the king of the Volvo estate castle. Style has not been sacrificed at the altar of practicality. Where the old V70 was all sharp angles and boxy looks, the new one is curvy all over. Designer Horbury has cleverly decreased the amount the side glass curves from front to rear, for maximum style at the driving end and maximum carrying ability at the business end. That rear, as before, is distinguished by Volvo's now-usual pillars of tail lights. Inside, funnily enough, sharp angles make a comeback. Volvo cabins have become more rounded-off in recent years but this one heralds the return of 90-degree-angled instrument and ventilation grille surrounds and is arguably even more stylish than the excellent S80's. You could directly swap the centre console with the S80 but everything else in the V70 differs in the detail if not general layout. The Swedes earn additional points for continuing to offer light interior colours as alternatives to the off-black shades so beloved by German designers. Then there's the two-position rear seat backrest to boost luggage space. Rear seat space isn't the V70's forte, as the bench is sculpted top seat two and there isn't a great deal of legroom for a central third passenger. However, console yourself with Volvo exclusives such as an under-floor shopping bag holder, an (optional) airline-style centre table for rear seat passengers, a plastic rubbish bag holder in the centre console and a hook in the front passenger seat headrest so the driver can grab his jacket without leaving his seat. Safety? Take top-spec for granted; this is a new Volvo, after all. From previous models you get SIPS side impact protection, WHIPS whiplash protection, an inflatable curtain of head-level side airbags and the DSTC anti-skid system. With the new V70 come dual-stage airbag inflation (determined by impact severity) and Isofix mountings for the optional rear-facing child seat. 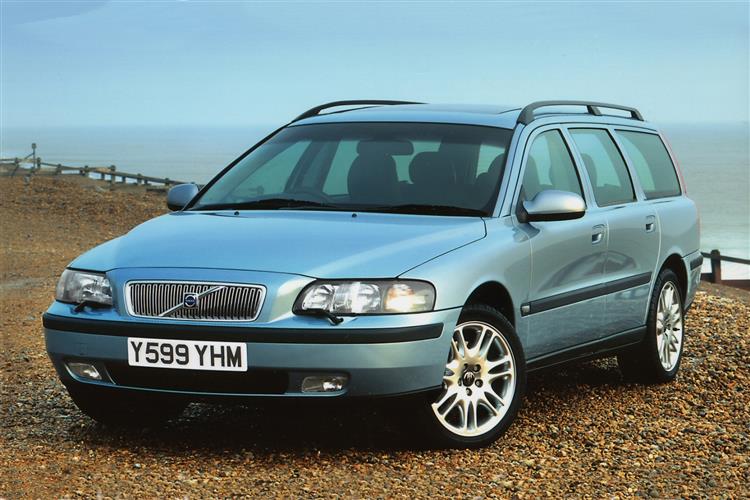