New models develop gradually from their predecessors - or at least some of them do. The Mercedes M-class is rather different. A greater step forward from its predecessor, the utilitarian G-Wagen, could hardly be imagined. In interior ambience and on-road ability, it's the difference between Grozny and Guildford. Although interior quality was initially questionable, the M-class graduated into a credible Range Rover rival and until the launch of the BMW X5, represented the ultimate expression of 4x4 urban chic. More often seen clambering gamely up a kerb in the high street than up a mountain in the Peak District, the M-class is nevertheless a very capable vehicle both on-road and off. It's also a roomy and practical proposition for those willing to pay for the three pointed star.

Clever product placement brought the M-class to a global audience of millions in its role as Best Supporting Actor in Steven Spielberg's Jurassic Park follow up 'The Lost World'. The basis for the M-class is anything but prehistoric considering that the G-Wagen's underpinnings wouldn't look out of place behind glass in the Imperial War Museum. This car is produced in Tuscaloosa, Alabama and encountered similar superficial quality issues as BMW when they opened shop in Spartanburg, North Carolina. With later cars, these problems were largely ironed out, and a more European quality feel was engineered in. The first model launched in the UK was the ML320, debuting in June 1998 with a relatively cheap sticker price of £34,445. This was followed four months later by the gutsy V8-powered ML430, which retailed for £42,465. There were no manual gearbox options available, although the five-speed automatic was the tried and trusted 'box used in the E and S-class cars. Whilst undoubtedly launching the M-class firmly into the premium 4x4 bracket, these prices significantly undercut equivalent specification Range Rover figures, with the ML320 retailing in the same ballpark as a top-end Jeep Grand Cherokee. In 2000 range as a whole benefited from improved quality interiors and body coloured bumpers, and the ML270CDi was launched. This diesel M-class was partly in response to the success of rival diesel offerings, and at £28,840 undercuts its nearest Range Rover rival by £11,000. The behemoth ML55 AMG also bowed in as a pre-emptive strike against BMW's X5. Nevertheless, as the locals in Tuscaloosa know, when it comes to trucks there's no substitute for cubic inches: the diesel unit is a tad underpowered for the sort of imperious velocities an M-class should be able to generate to dispose of lesser road users. 2001 saw a further revision to the M-class. A more aggressive front end was instantly apparent with restyled lights and bumpers. It's inside that owners of older M-class models got slightly green-eyed. Like the A-class of the time, the centre console reflected the design seen in the S-class model, whilst the minor controls were smartened up with flashes of chrome and red detailing. Rear seat passengers were treated to their own ventilation controls and also got a pair of double cup holders. The ML430 was replaced at this stage by the ML500, a 292bhp monster designed to spike the guns of BMW's X5. An all new M-Class hit the streets in 2005.

In short, a massive hunk of metal. The first impression an M-class gives is of being far larger than it looks in pictures. Blame it on the trendy rounded styling, vaguely reminiscent of a Land Rover Freelander or Honda CR-V if you will. In actual fact the M-class towers over a Grand Cherokee, dwarfs a Land Rover Discovery and makes a Toyota Land Cruiser Amazon appear somewhat thin. The interior is recognisably Mercedes, but with a difference. It looks as if whilst creating the interior, a rogue stylist last employed by Hyundai in 1985 managed to make his contribution felt. Some of the plastics feel decidedly insubstantial, and on early models opening the glove box will reveal hinges the quality of which are shamed by your average CD case. Other parts of the cabin, however retain the traditional Mercedes bulletproof feel. Rather than supply a traditional low range lever, a simple button on the dash suffices, and a sophisticated electronic traction control system called 4-ETS stops the wheels from spinning. Standard equipment includes air conditioning, twin front and side airbags, a premium Bose stereo system, ABS, cruise control, an alarm/immobiliser and Mercedes excellent Electronic Stability Control Programme, although woe betide any elk who expected an M-class to swerve out of its way. An extra cost luxury pack includes powered leather seats and a wood interior for those prone to forgetting they are in a Mercedes-Benz. 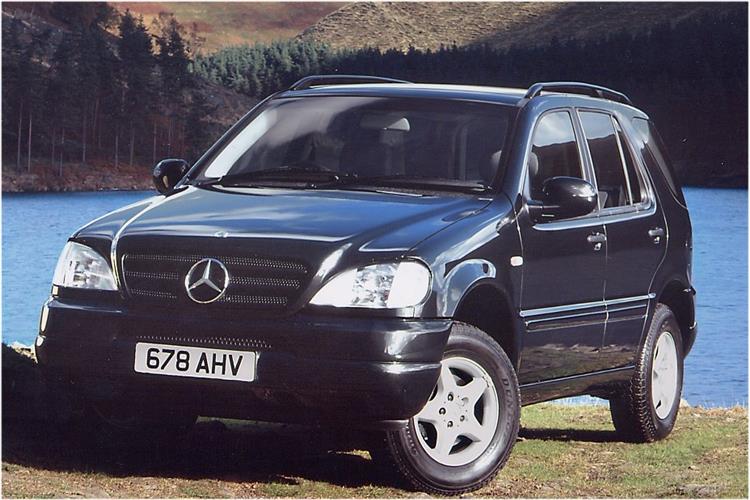