BACK TO THE FRONT (some text hidden)

Marking a return to a front-engined layout for flagship sporting Ferraris, the 550 Maranello sparked a revival of more usable Ferrari models. With a layout harking back to the Daytona of the Seventies, the 550 backed up its position by carrying a stick the size of a giant redwood. With 485bhp to call upon, it was at least two seconds quicker around the Fiorano test track than the Ferrari F355 - itself no slouch. With used models now starting to appear, can a 550 Maranello justify itself on any rational basis? Find out here.

It's probably fair to say that the Ferrari 550 Maranello's press reaction was muted upon its launch in late 1996. Despite the passenger rides around the Nurburgring with Michael Schumacher at the wheel, the press were less than effusive about the car's styling, denigrating it by repeatedly comparing it to a pumped up Toyota Supra. Whilst stylist Sergio Pininfarina's aim was to ensure that "the car must be aggressive and must give you an emotion. It must not be a cold fish.it must respect the best of the Ferrari Pininfarina tradition", his results were less than 100% successful. Nevertheless, whilst it's unlikely to go down as a classic Ferrari shape, the 550 Maranello has gradually become accepted as possibly the best Ferrari driver's car of the last twenty years, leaving aside for a moment low-volume specials such as the 288GTO or F40. It is this level of acclaim that will appeal to Luca di Montezemolo, Ferrari's charismatic president, who dictated the layout and name for the 550 and who made no secret of his dislike for its predecessor the mid-engined 512TR. Neither was he particularly enamoured by the fact that the average Ferrari owner was covering less than 2000 miles per year. Firmly believing that the best advertisement for Ferrari is seeing the cars on the street, di Montezemolo envisioned a more usable car, a car which could be used in the Grand Touring tradition, but which wouldn't compromise on raw ability. Packaging constraints suggested a front-engined layout, the mid-engined 512TR dismissed as "a car that was too much of a show-off". Judging the 550 Maranello by those criteria, it's a resounding success, but the jury may well be out for some time yet on whether Pininfarina's objectives were ever met. The 550 Maranello remained largely unchanged since launch, a few small detail changes being made along the way. The big news came in October 2000 with the unveiling of the 550 Barchetta Pininfarina Limited Edition, a run of 448 'speedster' style convertibles of which 45 were earmarked for this green, pleasant, and notably wet, land. The 550 was replaced in summer 2002 by an evolutionary model, the 509bhp 575M Maranello.

Leaving aside the question of depreciation, performance or running costs, the less tangible aspects of Ferrari ownership come to the fore with the 550. Take the interior for starters. There's a refreshing lack of pretension in its execution, a firm understanding of Ferrari heritage and what's necessary and what's mere frippery. No pompous walnut veneer here, no mock-F1 style carbon fibre. Nor are there modern niceties like steering wheel stereo controls, dimming mirrors or cup holders. Can you imagine the late Enzo Ferrari ever specifying cup holders in one of his cars? The very thought of trying to drink while at the helm of a Ferrari. The great man would turn in his grave. No, a Ferrari cockpit should always be designed for driving - and this one is. That doesn't stop it from being an automotive work of art, however, swathed in leather with careful chrome touches here and there. Take the polished gear-knob - it looks and feels extraordinary. Alone, it must be worth £500; or maybe even £1,000 - who can tell? Though the exterior styling may be more Beckham than Barrichello, this is a car for people who love Ferraris and don't mind others knowing. Perhaps it is this more than anything else that marks the 550 Maranello's greatness. You can't imagine someone who might otherwise consider, say, a Mercedes SL or a Jaguar XK8 buying this car; it's too wild - too extreme. But, unlike the F360 Modena, not so wild and extreme that you couldn't really use it as everyday transport. Which, by almost any justification, is about as good as it gets. 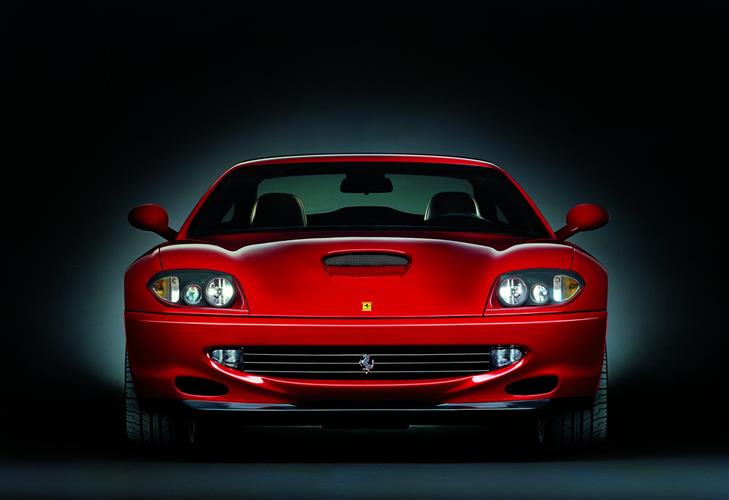