The Ferrari 360 had one of the toughest tasks in motoring history. Competing with ever more accomplished supercar rivals was one thing, but replacing the acclaimed F355 series was quite another. Could it live up to the standards of a car that many felt nuzzled close to perfection? The 360 series didn't rely on the almost delicate tactile pleasures of its predecessor, instead opting for a high-tech, high drama approach. A taut thriller with a twist in the tail and an Oscar-winning soundtrack, the 360 series wasn't so much an F355 sequel as a new production from the ground up. With used examples now beginning to appear, can a low-mileage 360 really be recommended?

The first Ferrari 360 Modena coupe models arrived in the UK in April 1999. Initial press reaction was favourable if not ecstatic, many reviewers caught on the hop by the F355's premature demise and not entirely comfortable with the Modena's slightly awkward styling. What brooked no criticism, however, was the engine. With 400bhp on tap from a 3.6-litre V8, the power was 25bhp up on the F355, even if the car had put on 40kg of extra weight. Available either as a conventional manual or with the 'F1' style paddle gearchange, the 360 Modena continued the latter day tradition of entry-level Ferraris being a showcase for innovative engineering solutions, not least in its aerodynamics and integral use of aluminium structures. The Ferrari 360 Spider convertible model's launch was delayed until October 2000 due to engineering issues concerning the car's soft top. With a similar window on the mid-mounted engine as the coupe, the Spider's desirability was boosted by the closer proximity to the V8's manic aural accompaniment. Again, the Spider was offered with manual or F1 gearboxes, with only around 35% of buyers opting for the paddle change. Perform a downchange with Ferrari's F1 gearbox as you brake hard into a corner and you'll wonder why. The range was added to in Summer 2003 with the arrival of the 360 Challenge Stradale coupe. Effectively a road legal version of the Ferrari 360 Challenge race car (Stradale means road compatible in Ferrari-speak) and weighing in at a hefty £133,025, the Challenge Stradale is a lightened, toughened, lower and faster version of the 360 Modena aimed at both gentleman racers and well-heeled trackday fiends.

Practicality has made the Ferrari 360 great. This might seem a perverse sentiment, pertaining as it does to a two seat, mid-engined 400bhp exotic, but Ferrari definitely learned lessons from the overblown eighties cars that still lingered in the range when President Luca di Montezemolo took over the reins at Maranello. Describing the Athena-poster 512 TR as "a show off" and the 348 as "one of the worst Ferrari's I've ever driven", di Montezemolo envisioned a future where Ferraris were possessed genuine utility a la Porsche 911. If the firm could engineer in such utility without diluting capability, the car's mileages would rise, the cars would act as mobile Ferrari advertisements, dealers would undertake more servicing business and both new and used sales would blossom. Walking a tightrope between exclusivity and revenue, di Montezemolo might just have pulled it off. Certainly the Ferrari 360 is the sort of car that offers more than a passing nod towards practicality. The early promotional videos showed Eddie Irvine casually tossing a bag of golf clubs into one, and Ferrari were at pains to demonstrate the wider opening doors and narrower sills. Driver and passenger airbags and a swooping, soft dash remove a little of the stark, supercar drama of years gone by, but the smell of hot oil and the impatient whine of that glazed-in V8 that permeates the cabin lets you know that the boys in the engine department have adopted the practicality drive with something less than work-to-rule willingness. 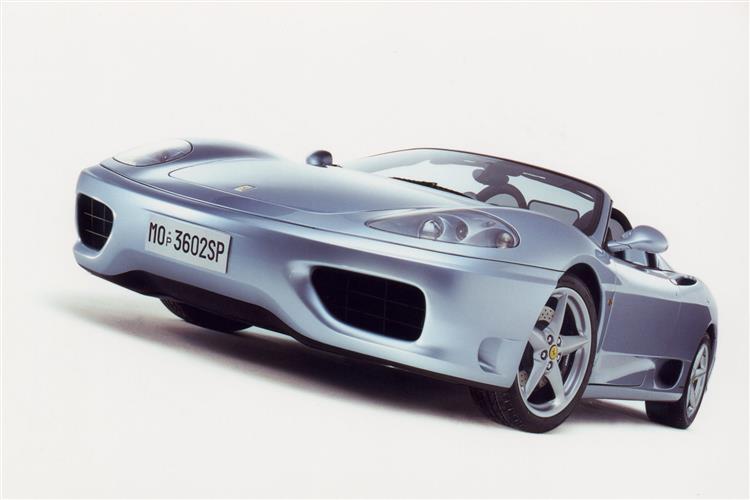