AS GOOD AS IT GETS (some text hidden)

Trying to pick faults with the BMW 5 Series is a largely thankless task. If pushed to name a car that approaches automotive perfection, most industry observers would nominate the BMW that tops most executive wish lists. The fact that there really isn't a great deal to objectively criticise has led to the two areas that could be described as the 5 Series' Achilles heel, namely value for money and image. Premium pricing from new and high demand means that there aren't too many used bargains around, whilst many are turned off by the predictable choice, preferring something a little more individual such as the Audi A6 or Volvo S80. Still, if you want the best, here it is and here's the information you'll need to be armed with to find a good used example.

It's hard to believe that in one form or another the BMW 5 Series has been with us for over a quarter of a century. Those with longer memories will remember the early chrome rimmed boxes with 'interesting' wet handling. As the years passed, the 5 Series grew larger and more assured. Constant development from the Munich company ensured that the car was never anywhere but at the top of its class. The introduction of the fifth-generation 5 Series in April 1996 dealt the opposition a hammer blow which took them years to recover from, whilst a series of revisions in late 2000 saw BMW move the game on yet again. The 5 Series formula has been easy to trace throughout its history. Take a well-proportioned saloon body, with a range of chiefly straight-six cylinder engines directing power to the rear wheels and fit with a cabin that few can rival for quality and ergonomic excellence. Bolster with advertising proclaiming perfect weight distribution, call it the Ultimate Driving Machine and you've got a recipe for success. Of course, it doesn't hurt if the car actually lives up to these promises, as Scandinavian rivals have found to their cost. When the fifth-generation Five arrived in 1996, the range was reasonably straightforward. Saloon models existed fitted with a 2.0-litre six cylinder engine developing 150bhp (520i), a 2.5-litre version with 170bhp (523i) a 2.8-litre variant punching out 193bhp (528i) and the flagship straight six, the saloon-only 3.5-litre 535i, which could muster a healthy 235bhp. Sitting at the top of the range was the 540i saloon, which sported a creamy V8 engine, (still something that people were slowly getting used to in a 5 Series) which displaced 4.4-litres and had 286 horsepower at its disposal. 520i and 523i models were available in either base or SE trim, whilst the 525i, 528i, 530i and 540i saloons were latterly also offered in Sport trim. The Touring (BMW-speak for Estate) models arrived in 1997, with the 528i and 525tds diesel arriving in January, followed by 520i and 523i Touring models in April and the 540i Touring in September 1997. September 1998 saw the introduction of the excellent 530d SE models, powered by the 184bhp direct injection turbodiesel 3.0-litre engine which was to go on to garner such critical acclaim under the bonnet of the BMW 330d. Available in saloon or estate, the 530d was slightly slow to catch on, hindered in no small part by a hefty price tag of over £29,000 for the saloon, with the Touring model breaking the psychologically significant £30,000 barrier. At the same time as the 530d's unveiling, BMW quietly withdrew the unloved 525tds model. Performance enthusiasts had been waiting with bated breath for the men at BMW's Dingolfing plant to unleash the latest red-hot M-Power version of the 5 Series, and in March 1999, the wait proved well worth it. With 400bhp and a V8 engine, the M5 rewrote the rules on what defined a premier league performance saloon. At a few pounds shy of £60,000 it certainly wasn't cheap, but judged on any objective basis, the M5 was quite simply the best car there was. Many would argue it still is. The 5 Series range received a through makeover in September 2000. The 520i's 2.0-litre engine was consigned to the history books, replaced by a 2.2-litre unit that developed 170bhp, an identical output to the 523i which, unsurprisingly, was also replaced. Its successor, the 525i was powered by a 2.5-litre unit developing 192bhp, only 1bhp less than the 528i. See where this is going? You'd be right. The 528i was axed, making way for the 231bhp 530i, with its 3.0-litre straight six cylinder engine, available in saloon or Touring guises. Perhaps feeling that the 530i's power output of 231bhp was inching uncomfortably close to the 535i, BMW got the software jockeys to work on the 535i's engine management electronics and released another 10bhp, giving it 245bhp and some breathing space from its upstart younger brother. To attract diesel buyers disenfranchised by the 530d's big sticker price, but wanting similarly sophisticated technology, BMW also introduced the 525d in saloon and Touring body styles. This 2.5-litre turbodiesel engine utilised much of the 530d's technology in a more manageable package, still pushing out a respectable 163bhp. BMW also made a number of cosmetic changes for the 2001 model year. Pay attention and you'd spot body-coloured rubbing strips, round fog lights and a redesigned front spoiler. The headlights were now of the fashionable clear lens variety and the indicator lamps became round. To help some of the M5 magic trickle down through the rest of the range, that model's wider chrome grille surround were found on all variants. The V8 versions also gained chromed vertical grille slats. The effect was very subtle but clearly adhered to the BMW family look. The interior benefited from a few tweaks as well. If the rear side airbag option was specified, additional airbags were fitted in the rear pillars, bringing the total number of airbags to no fewer than ten. A revised range of options were also available, including a Mini Disc system, a voice-controlled telephone and a larger television screen.

There aren't too many surprises with a 5 Series. You know it's going to be beautifully built, great to drive, understated and well equipped - at a price. You really can't finger a poor model in the range, although if we were being really harsh, the 525tds and two-litre 520i aren't the most inspiring drives. The 530d and 540i are the highlights for the mainstream buyer, with the M5 deserving honourable mention for its sheer all-round dynamic excellence. Once you've chosen your engine, is it worth choosing manual or auto? The auto boxes are good, and the larger engined models (528i and above) suit the automatic best. With less power at your disposal, opt for a manual. SE specification model boost the basic trim to the tune of more attractive wheels, halogen foglamps, air conditioning or sunroof and an on-board computer. After September 1997, that list also included a multi-function steering wheel, whilst in September 1998 parking distance control and a redesigned alloy wheel featured. Sport trim includes M-sports suspension, 17-inch light alloy wheels, body colour bumpers and side skirts, fog lights, air conditioning, Stability and Traction control and so on. If you can afford it, the Sport specification pack gives you practically the entire list of extras on BMW's options list. 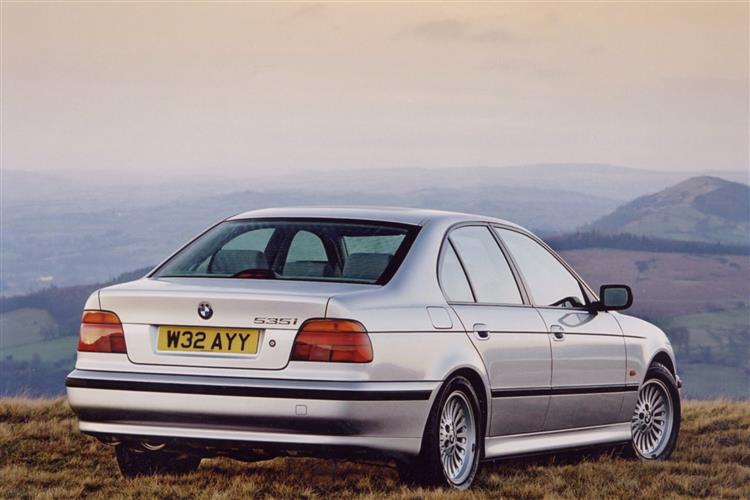