It's not often that a new car is launched that completely rewrites the parameters for a given class. In the last fifteen years it's probably fair to say that possibly the Mercedes A-class, the Lotus Elise and the Renault Scenic have done this. Whilst they have innovated to succeed, BMW's X5 has just used sheer excellence to steamroller all before it in a way only matched by the eye-popping all-round competence of Ford's Focus. Before the X5 was launched, we all thought a Range Rover or a Mercedes M-class boasted sweet road manners. To be quite frank, the X5 made them look clumsy and agricultural. If you want the best luxury 4x4, this is it. No ifs, buts or maybes and as a used proposition it's even better, but if you're thinking of picking up a bargain, prepare for disappointment. X5's don't come cheap. If you want the best, you're going to have to pay for it.

The X5 was one of the worst kept secrets in recent automotive history. Spy photographers had snapped the behemoth BMW tearing around Germany's legendary Nurburgring many times in 1998 and 1999. What was perhaps surprising to the casual observer was that this model had been earmarked for production at BMW's Spartanburg plant in North Carolina. With the US being the biggest net consumer of large 4x4s this made perfect financial sense, although some doubted the factory's ability to nail down quality given the occasionally slipshod build of the Spartanburg Z3 models. They needn't have worried. Any X5 you enter feels utterly indestructible, the build quality well up to scratch with anything from Germany. The first models to roll off the production line were all X5 4.4-litre models, the 3.0-litre petrol and diesel models not arriving in the UK until early 2001. All models were offered in normal or 'Sport' guise. In March 2002, in response to the appallingly powerful Mercedes ML55AMG uberwagen, BMW also announced the launch of a 4.6-litre sports version of the X5, the 4.6iS. Significant changes to the X5 surfaced towards to tail end of 2003. The 3.0-litre diesel engine was up-rated from 184bhp to 218bhp, a new 4.4i V8 with the Valvetronic inlet control system was added and the 4.6iS became a 4.8iS. The xDrive system was introduced to aid traction in tricky conditions and the whole package was given a thorough facelift. You'll spot these X5s by the edgier headlamps and the sharp bonnet lines running down to the front grille. An all new X5 arrived for the 2007 model year with increased interior space and a seven seat option.

This is the Munich company's spin on luxury 4x4 motoring - and to be honest, this sector had long been in need of it. Before this BMW arrived, a Range Rover was always the most car-like all-rounder you could buy in this class, but if you were used to the responses of a sharp sports saloon, that wasn't saying much. In contrast, the X5 moves the game to a different level. Owners of other luxury 4x4s may have a different view on this of course. They will point out that unlike its opposition, the X5 isn't built on the kind of separate ladder-framed chassis previously deemed necessary for heavy-duty work. They will point out its lack of a low ratio gearbox and the fact that its ground clearance (just 180mm) is less not only than off road rivals but also of some car-based 4x4s. In short, they will suggest it to be a 5 Series in a trendy new suit. Even if that were true - and it isn't - the X5 would be a truly excellent car. The cabin is so car-like that it makes other rivals' efforts seem positively utilitarian. You sit in the required lofty position (180mm higher than you would in a 5 Series) but somehow the feeling is more of being in a sports saloon than in a 4x4. The all-round visibility helps too, making this car feel smaller than a 5 Series Touring, despite its much greater luggage space (465 as opposed to 410 litres). That space is accessible too, thanks to a horizontally split rear hatch split in electronically operated sections. You can open the upper window to put in smaller items or fold down the bottom to extend the floor for longer objects or to facilitate tailgate picnics. Unless you're into serious off roading - or pale at the asking price - it's hard to think of many reasons not to buy one. 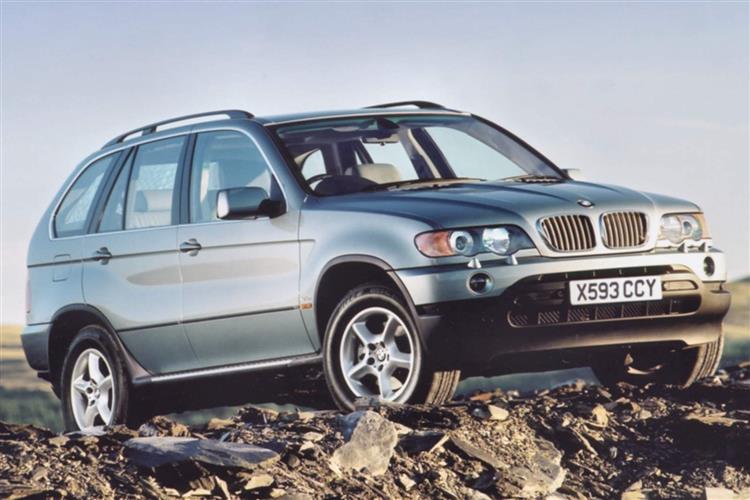