Nissan banished any residual memories of the dull but worthy third generation Primera in the striking shape of the fourth generation car, introduced in 2002. With a number of technological breakthroughs for the medium range class, the Primera was rapidly hailed as the car that could dethrone the all-conquering Mondeo. Unfortunately, the pace of progress meant that it didn't turn out that way for the likeable Nissan, but with residual values hardly stratospheric, it's possible to land this interesting car at surprisingly affordable price.

Before this fourth generation car, the Primera was notable for two things. Mainstream models were beloved by cabbies and few others whereas the GT version offered a great sports package but was blessed with a face only its mother could love. February 2002 saw an all-new Primera radically alter our preconceptions about middleweight Nissans. With a sleek, bulbous body shape and an interior that heralded a new family design for the Japanese company, the Primera instantly made all its rivals look a little old-fashioned. The diesel engine initially offered was a 124bhp turbodiesel that was a little long in the tooth, but Nissan soon saw fit to replace this unit with a 136bhp common-rail dCi diesel engine. A factory-warranted 1.8-litre LPG version was also introduced at the tail end of 2002. Changes brought in during the spring of 2004 saw the Primera's exterior styling unaltered but various modifications to the interior and boosted equipment levels made the car a more desirable proposition. Rear parking cameras and satellite navigation on all bar the entry level models made the Primera one of the best equipped cars in its class. By the early part of 2006, the Primera range had been slimmed down to one engine - the 1.8-litre petrol - and three trim levels in preparation for the axe. It still looked decent value for money with all that equipment included. By the early part of 2007, the Primera had disappeared from the pricelists.

What You Getword count: 474

This Primera was styled in a Munich design studio and whereas the Nissan culture was previously to dilute the more radical excesses of the initial sketches to the point of timidity, the board okayed the Primera design with no changes. So let's start with the basics. There were hatch, saloon and estate models offered in S, SX, SE, SVE or T-spec levels of trim. Though priced a little higher than Primera customers had paid in the past, Nissan was quick to point out that the car was safer, more comfortable and better refined, as well as being significantly better equipped than its rivals. Forget all that though: it's the styling that caused most comment. The exterior lines are pleasantly swoopy with a very European feel to them. Designed to look like a "proper driver's car", the Primera scores in that crucial first few seconds of acquaintance. The rear three-quarter view has that high-haunched look of the original Skoda Octavia, the curves, bevels and planes being very well judged. Even the corporate Nissan nose manages to avoid looking like something that's melted in the sun, instead integrating between bumper and bonnet without that suspicion of afterthought that permeates many earlier Nissan efforts. Underneath, the bodywork is a stretched and reinforced version of the Almera platform, and although the Primera has a decent road presence, the evidence of the tape measure shows it to be a good few inches shy of equivalent generation Passat and Mondeo dimensions. It's longer, taller and wider than its predecessor, however, and used many clever packaging tricks to increase interior space. Widening the track and stretching the wheelbase helped too: the boot on the four-door car is a useful shape and able top swallow 465 litres. Running counter to many designs of the time, the four and five door cars have been styled to look nigh-on identical, whilst the estate version goes for a trendy Sportwagon-style sloping roofline. The interior is even more adventurous than the voluptuous bodyshell. Three main dials are perched inside a central binnacle, below which is housed an LCD screen with a 'keyboard' of various buttons on a shelf in front of it. A less extreme version of this school of thought was previously trialed in the X-Trail off roader, another model which, incidentally, uses the Primera platform. The centrally-mounted instruments and bold use of colour contrasting found favour with X-Trail customers and Nissan have developed the theme here. With the exception of early models, even entry-level cars feature a colour LCD screen and electric rear windows, although plusher variants also have voice-activated electronic functions and a DVD-based satellite navigation system was offered, becoming standard after the 2004 facelift. All models feature climate-controlled air conditioning, front, side and curtain airbags, a 6-speaker CD stereo, a trip computer, electric mirrors, remote central locking, front electric windows and ABS. 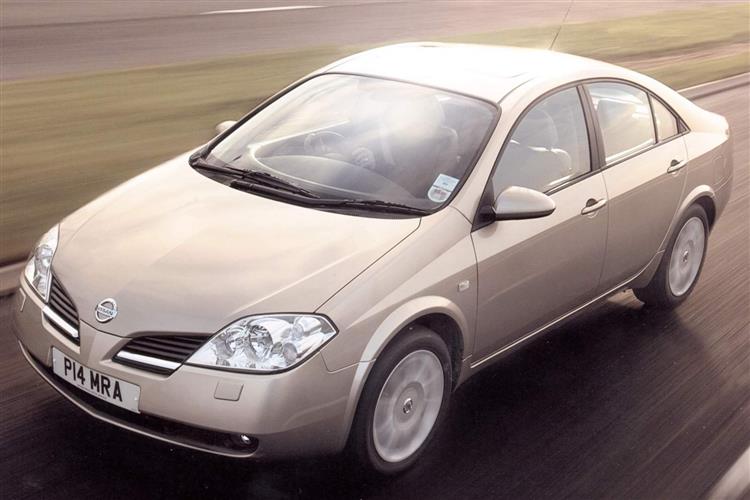