Slotting chronologically between the hallowed 550 Maranello and the similarly lauded 599GTB is the Ferrari that history will probably gloss over. The 575M is at its best with GTC handling pack and F1 gearshift but this is a good but not great Ferrari. It doesn't do a whole lot that a BMW M6 can't better for less. The 550 Maranello was a sparkling return to form for Ferrari, reviving the days of the big, brutish front-engined sportster. Introduced in 1996, it was beginning to look a little tired by 2002 but the replacement was an evolutionary model that softened the 550's edge and which never captured the public's imagination. What's more, the 575M lasted just over three years before it was phased out, eventually 'replaced' by the hugely impressive 599GTB. If you liked the 550 but hanker after a newer car, the 575M is certainly not without its appeal, especially when fitted with the GTC handling pack. Here's how to find a decent used example.

In many ways, January 2002 was something of a nadir for the flagship Ferrari sports car. The 550 had just competed in a European speed trial against the Porsche 911GT2, the Aston Martin Vanquish, the Mercedes SL55 AMG and the Lamborghini Murcielago. In terms of both acceleration and top speed, the Ferrari was leathered. It finished last on just about every objective criterion you could turn a stopwatch to measuring. Ferrari weren't accustomed to being the whipping boys of the supercar class. Fortunately, plans were well under way for the 550's successor, the 575M Maranello. Six years is a long time in the rarefied atmosphere of supercardom, and the 550 was getting, if not long in the tooth, then at least a little arthritic in ultimate terms. The 575M responded with an extra 29bhp and a whole raft of evolutionary improvements. The exterior changes were subtle in the extreme. Those who denigrated the 550's styling as being inelegant for a classic front-engined Ferrari were correspondingly unimpressed by the 575M but the shape has worn quite well and still looks cohesive. The 575M arrived in UK dealerships in summer 2002 and received a mixed review from a press rather unimpressed that Ferrari had softened the car's edge, despite giving it more power. Recompense came in summer 2004 with the launch of the 575M with GTC Handling Pack. An interim measure had been attempted to sharpen up the 575M's handling with a £2,215 Fiorano handling pack to the standard car but the latter GTC pack was fully £16,450 worth of extras and changed the car's personality quite markedly. Here at last was the sharpened model that many original owners demanded. A limited run Superamerica convertible model was introduced in 2005, shortly before the 575M was axed to make way for the 599 GTB.

What You Getword count: 431

No, it isn't any great beauty, but the sheer muscle and purpose of that body shape has wormed its way into the affections of many and Ferrari have seen fit not to tamper too radically. The lower nose section is slightly more squared off and is punctuated by a pair of brake cooling vents. Less successful is the adoption of a set of xenon headlamps which, in an attempt to replicate the voguish jewel effect, merely appear more Elizabeth Duke than Tiffany. The interior has been tidied up agreeably. Much of the trim quality has been beefed up and the instrument panel is now dominated by a large alloy-rimmed tachometer, the speedometer relegated to a minor position stage left. It's a good idea in principle, highlighting the purist appeal of a car centred about its engine, but one can't help but ponder the fact that GATSO cameras don't differentiate between 4000 and 7000rpm, whereas the difference between 55 and 65mph could potentially equal a disqualification. Even for somebody with the means to afford a 575M. One of the key differences between 550 and 575M is the option of a paddle-change sequential manual gearbox. Two fixed position alloy paddles sit behind the steering wheel, left for down changes and right for upshifts. The GTC Handling Pack didn't just restore the 575M to the heights of the 550 Maranello - it comprehensively eclipsed it in the way the car goes, stops and steers. Much of the asking price is accounted for by a set of carbon-ceramic brakes that offer prodigious stopping power. Front disc diameter goes up to 398mm (compared to the 330mm cast-iron rotors worn by the standard 575M) and six-piston calipers clasp onto them with ferocious tenacity. Thus equipped, Ferrari have sent a 575M out onto their Fiorano test track to complete 300 laps without significant degradation in braking performance. In order to house the monster brakes, Ferrari upped the wheel size to 19 inches, the five-spoke wheels being slathered in some rather attractive Pirelli P-Zero Corsa rubber. The suspension was given a thorough working over. The front springs were beefed up significantly with the rear springs also being slightly tweaked. Revised dampers and a massively brawnier rear anti roll bar guaranteed a flatter, more poised cornering stance. Ferrari's test driver, Dario Benuzzi, reckoned these changes gave the 575M with the GTC pack a full 1.5-second advantage around the twists and turns of the Fiorano test track. A modified silencer gave the GTC-equipped car a slightly fruitier exhaust note than the standard model but the engine is still a background player. 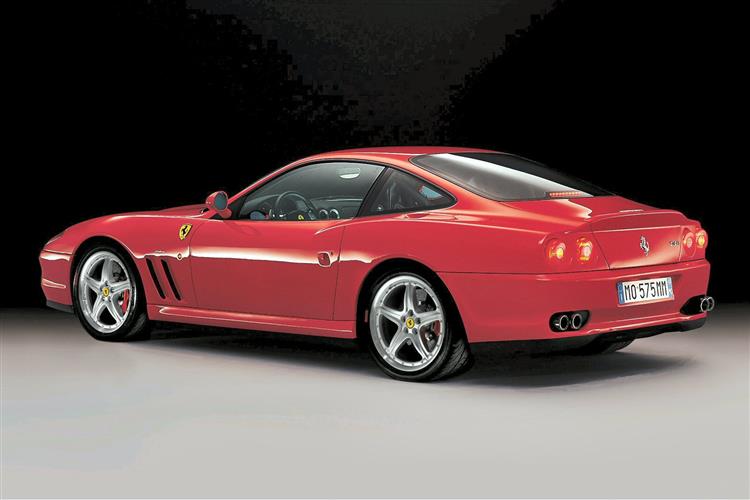