The market for used full-sized MPVs used to be a depressing place. Trying to land a low mileage Espace, Previa or Galaxy for reasonable money was a fruitless task and tooling about in a Mitsubishi Space Wagon or a Nissan Serena often represented social death. Luckily South Korea came to the rescue in the form of the Kia Sedona, and it was joined by the Hyundai Trajet, a vehicle that offered contemporary looks, a range of decent engines and an equipment level that made the established heavyweights fall out of their easy chairs. To cap this off prices were lodged firmly in the bargain basement. Used buyers now know where to look first and the Trajet has been something of a winner for Hyundai.

The history of the Trajet is short but successful. Initially offered with a choice of 133bhp 2.0-litre four-cylinder or 168bhp 2.7-litre V6, it landed in June 2000 to modest acclaim. Word soon got out that here was a better-built alternative to the even cheaper Kia Sedona that traded on Hyundai's reputation as a manufacturer that was going places. The Trajet was joined in 2001 by a 2.0-litre turbo diesel variant which made 111bhp but could average 37mpg. In the summer of 2004 Hyundai carried out a very mild facelift on the car so later models can be spotted by the altered grille and headlamp set. At the same time, the existing 2.0-litre petrol engine was replaced by a CVVT unit of the same capacity with more power and lower emissions. The Trajet was quietly dropped in mid 2008.

Compared to some of Hyundai's more exuberant efforts, the Trajet's styling is contemporary and restrained with a minimum of Korean chrome. So it comes as no surprise to learn it was actually styled in Frankfurt, not Seoul, and made its public debut at the 1999 London Motor Show. In size terms, the Trajet (pronounced 'Tra-jay', French for 'journey') is almost an exact match for the Galaxy/Sharan/Alhambra triumvirate. Yet the 2.0-litre Trajet GSi undercut the cheapest of the three Europeans, the Alhambra, by £2,500. And it's extremely well equipped with dual airbags, anti-lock brakes (with electronic distribution of the braking forces), remote control central locking with alarm, immobiliser, air conditioning, all-round power windows, power adjusted mirrors and a CD player all standard. If you want diesel power, the identically equipped Trajet TD manages a rest to sixty time of 14.2s on the way to a maximum speed of some 106mph. Unfortunately, it isn't much more economical than the 2.0-litre petrol version, with an extra urban figure of 43.5mpg that is very little different. Overall, you should save about 7mpg by opting for the diesel variant: in other words, don't expect to make up the price premium too quickly. Opt for the flagship V6 model - which undercuts European rivals by up to £7,000 - and you get a silky-smooth (but thirsty) V6 plus side airbags, traction control, leather seats, alloy wheels, cruise control, an electric tilt/slide sunroof, heated door mirrors, rain-sensitive wipers, light-sensitive headlamps and front fog lamps. Automatic transmission is standard on the V6 and optional with the two-litre engine. In practical terms the Trajet is a good match for any of its seven-seat rivals though, like most of them, luggage space is somewhat limited with all the seats in use. The front seats swivel to face the back and the five rear chairs can be easily removed (you'll need somewhere to store them). Plus there's a full complement of the seatback trays, cup holders, fold-up trays, map, bottle and pen holders, gloveboxes, reading lights and luggage nets that today's MPV buyers expect. 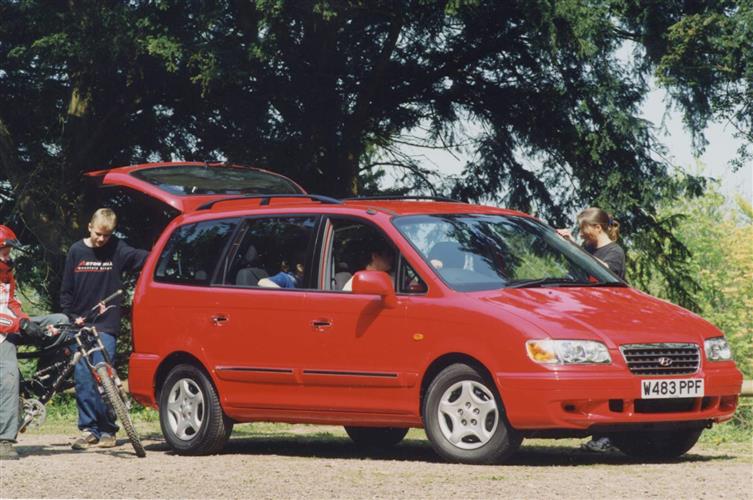