Nissan's third generation Primera was a car that very much underplayed its hand. Beneath the somewhat dowdy styling was a package that had a lot going for it, and was well screwed together by the staff at Nissan's Sunderland plant. It was always one of the more European feeling 'Japanese' cars, set up to cater for continental tastes, but whilst still offering traditional Oriental values of reliability and value for money.

The Primera lineage can effectively be split into three separate parts, although maybe not the three you were expecting given that the models we examine here are dubbed Third Generation. Generations One and Two (1990-1996) established the Primera name and were a little dull in their execution. The Third Generation car was a new car altogether - a vastly improved effort with class-leading driving dynamics but which carried over a recognisably Primera shape. This was to cost it sales amongst buyers who incorrectly considered it a mere facelift of the older cars. A superb 2.0-litre turbo diesel replaced the poor old two-litre normally aspirated unit of the old model. An estate was launched in April 1998, replacing the first generation model which had soldiered on until then. Slow sales were attributed by the UK importers to the bland looks with the result that a major restyle was commissioned and a revised, much better-looking range launched in September 1999. Inside and out, this car was much more stylish and the range now included a 1.8-litre petrol engine. All trim/equipment designations were new, too, including smart Sport and Sport + versions. This did little to spur customer take up and in late 2001 a boldly styled range of all-new Primeras was announced.

What You Getword count: 377

Private people buying a medium range family car want image and prestige. Companies meanwhile, want most of the cars they purchase to be powered by petrol engines offering the right balance between performance and economy: 1.8-litres is usually considered to be about right. Since the original second generation Nissan Primera had neither of those things, the emergence of almost completely new version halfway through its model life came as little surprise. This is the car we should have had at the start, with a proper range of engines to power a line-up of saloons, hatches, and estates. The front corners are softly curved while the bonnet has sculpted lines that flow into the familiar Nissan 'flying wing' chrome grille and on over gas discharge headlamps to dip into the reshaped front bumper. The side profile also has stronger feature lines to make it look less slab-sided and the rear features revised tail lamps and a more rounded boot section. Changes to the interior were equally necessary - and were equally far-reaching. The facelifted Third Generation car is lighter, simpler and more upmarket looking. Though unfortunately, the basic shape of the dashboard couldn't be altered, a metallic facing has made it look much smarter, as have brighter instrument graphics and various splashes of chrome. Though the bodystyles remain as before, there are new equipment grades labelled E, S, Sport, SE, Sport+ and SE+. Sadly, with the deletion of the 148bhp engine, the performance GT version is no more. Nothing then to emphasise the Primera's continuing status as one of the best handling cars in its class. Still, that didn't help the original Primera. Nor did high equipment levels, now extended to include ABS across the range, along with twin front and side airbags (on all but the base 1.6E), plus climate-controlled air conditioning on all but the base model. Nice touches include a 'curry hook' for your takeaways, built into the back of the front seats. There's also brake assistance for emergency stops, a system to warn against high emissions and seats designed to reduce car sickness. All examples of the careful thought which albeit belatedly has made the latest Primera such a competitive car. If you're shopping amongst Mondeos, Vectras and Lagunas, it deserves a second look. 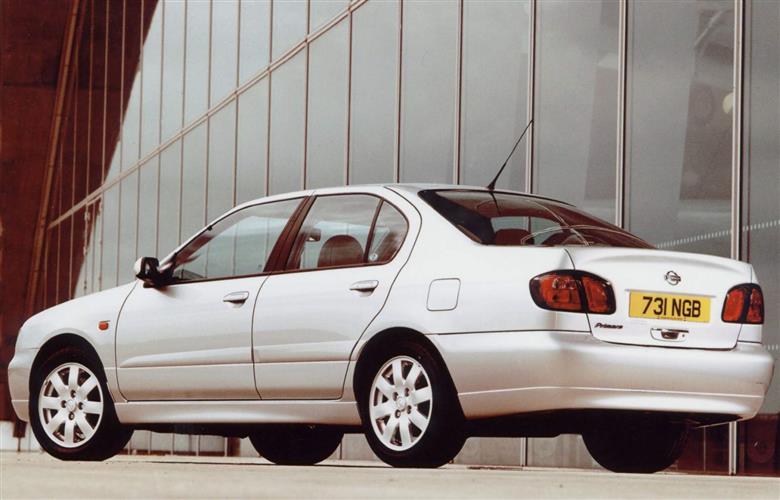