Far be it from me to perpetuate national stereotypes, but according to Hyundai, the Accent's popularity in Scotland and Northern Ireland is due to its "brilliant value for money" and it is indeed an endearing image. Canny Celts, perhaps realising that here was a Focus sized car for Fiesta money have purportedly been queuing up to demand their regional Accents, with resultant sales doubling in under three years. As a used proposition the Accent is a good bet, even for the English.

The Accent range was launched in October 1994 and established a useful beachhead for Hyundai in the UK, recovering as it was from its rather woeful first tranche of imports such as the Pony and the (somewhat less than) Stellar. The Accent was different. It still offered a lot of car for the money, but it no longer appeared to be a decade behind the times. Fast forward to 2000 when an all-new Accent range was introduced. Bigger, more powerful and more reliable the Accent became a serious proposition. The major manufacturers started paying attention to the South Korean upstarts and when Hyundai developed an Accent World Rally Car the jibes that had dogged Hyundai for so long soon evaporated. Available as a three or five door hatchback with either 1.3 or 1.5-litre engines the Accent has consistently scored well in product satisfaction surveys. It's not wildly exciting, but the little Hyundai makes an excellent used buy for those who aren't after the last word in urban sophistication. In 2003 the range was substantially updated, with the addition of a 1.6-litre engine replacing the 1.5-litre unit. Four-door models replaced three-door versions and with smarter styling and better equipment levels, the Accent range was subtly shifted upmarket. By spring 2004, the 3-door was back but only in entry-level 1.3-litre GSi form. Run out models badged Accent Atlantic were introduced late in 2006 but this Accent was replaced by the i30 model in the summer of 2007.

Despite the great leap forward over its predecessor, it would be difficult to mistake an Accent for a Focus in the supermarket car park. If it were placing a lonely-hearts ad, the Accent would describe itself as full figured and honest, which is a gentle way of saying dumpy and plain. This being so, the Accent does dumpy and plain really rather well, resisting the temptation to add token flair which might well spoil the effect. It sports a grille that wears a smile more forced than that witnessed when Portillo lost his seat, and the interior is a uniform sea of grey. In this unremittingly monochrome cabin, one begins to engender the feeling that this is somehow deliberate, an almost ironic pastiche of visual sterility. There is nothing to look at, nothing neat, wry, original or slick, yet it all works intuitively, with a broadly impressive perception of quality. The seats are decently supportive and height adjustment for the driver's seat is now standard on the top-spec models. The boot is generous and the 321 litres of space can be well utilised thanks to the boxy shape, wide opening and low load height. As before, the rear seatbacks fold to extend luggage space. Accent buyers have usually proved remarkably pleased with their purchases. A customer survey for Which? in September 2000 named the Accent as the UK's joint most reliable car, a distinction it shared with the Toyota RAV4. Hyundai also quote an extremely high level of customer satisfaction and loyalty. 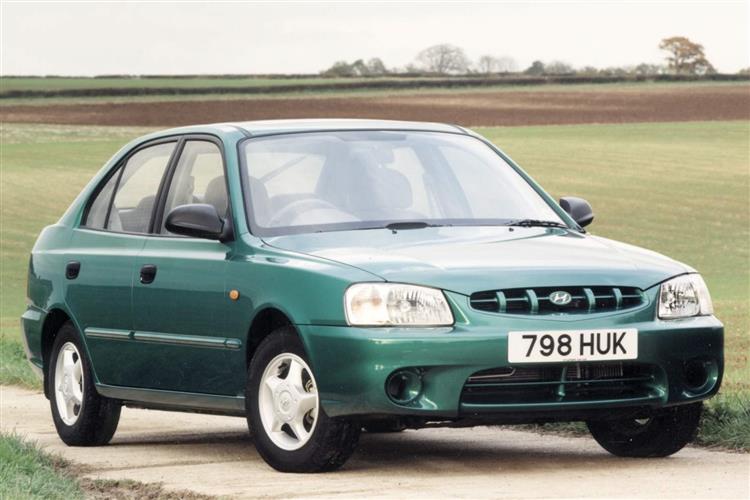