Americans and Europeans rarely see eye to eye on matters of automotive taste. Nowhere is this more apparent than in the comparative sales of Volkswagen Boras and Golfs. The Yanks can't get enough of the booted Bora, outselling the hatchback Golf three to one, yet over here the trickle of Boras leaving Volkswagen showrooms is engulfed by the tidal wave of Golf variants. So much for the cultural discourse, but how does this impact on the used buyer? It basically means that if you've no objection to having a boot, a used Bora will be in less demand than the equivalent Golf. Therefore, it will be cheaper, enabling you to save significant sums whilst still benefiting from the Volkswagen ownership package that has proved so successful of late. A Volkswagen for Ford money? That's about the size of it.

Booted Golfs go back a long way. The Jetta was the first, a car with a boot so large it looked like it was trying to claw its way up the rear window and engulf the rest of the car. To be able to proceed without dragging its posterior along the Queen's highway when the boot was full, Volkswagen chose to equip the Jetta with rear springs apparently made from a solid billet of steel, thus giving a teeth-shatteringly firm ride. Resultant sales were minimal. The Vento came next, with its more sophisticated suspension. Unfortunately, with its grotesquely distended rear end, it resembled something in a pickling jar at Ripley's Believe It Or Not. It too sold mainly to police forces and to human traffickers with a soft spot for quality fit and finish. It wasn't until the introduction of the Bora in 1999 that Volkswagen proved that a Golf with a boot could be a genuinely attractive proposition. Based on the Golf Mk IV, the Bora was, if anything, even prettier than its hatchback sibling, especially in plusher guises. Initially available with five engines, three petrols and two diesels, the Bora had an uphill task on its hands to convert buyers who were passionate for parcel shelves. The petrol engines were all tried and tested Golf units, kicking off with a 100bhp 1.6, with the ubiquitous 115bhp 2.0-litre unit and the oddball 150bhp V5 supporting it. Surprisingly, there was no place in the Bora range for Volkswagen's 'default' 1.8-litre engine in either normally aspirated or turbocharged guise. Diesel buyers had the choice of two 1.9-litre direct injection turbo diesel engines, one with 110bhp, boasting Volkswagen's innovative Pump Duse technology, the other with 90bhp, not boasting Volkswagen's innovative Pump Duse technology. Both were well received, and the 110bhp PD engine received a small power boost to 115bhp in October 1999, with a five-speed automatic tiptronic gearbox option being offered shortly after. This engine was in turn replaced by a 130bhp TDi unit in 2001, and the 110bhp unit was reintroduced to give a three pronged diesel attack alongside the budget 90bhp versions. January 2000 saw the introduction of the flagship model of the range, the 204bhp Bora 2.8 V6 4Motion, fitted with, as the name implies, four-wheel drive (in this instance putting this power to the ground through the Haldex-differential of Audi's TT coupe). In December of the same year a number of changes were made across the Bora range. Volkswagen upped the power of the 1.6-litre automatic cars to 102bhp, made a number of cosmetic changes to the wheel choices available, added CD auto changers as standard to Sport specification cars and, most significantly, boosted the V5 engine's power from 150bhp to 170bhp. A sporty ST specification was introduced in summer 2001 to sit between S and SE trim levels available with either the 1.8T engine or the TDI 130 diesel unit. The TDi diesel range was reappraised at the end of 2001 to consist of 100, 130 and barnstorming 150bhp Pump Duse variant. A value added Highline model was launched in early 2004 priced marginally above the SE but offering far superior equipment levels.

Despite being pigeonholed as merely a booted Golf, this description sells the Bora short, both literally and figuratively. Volkswagen's compact family four-door now has its own identity; the boldly styled front end, flared wheel arches and a lopped-off, chunky rear all make an aggressive fashion statement that has much more street cred than any Golf. Certainly, most will agree that the resulting profile is sharp enough - in up-market forms at least - to make the car a real quality alternative to lower order 3 series saloons, A4s and 156s. Nor is the Bora much smaller than these two rivals. As we've suggested, it sits on the same platform as the Golf, but there are some big differences between the pair. A nine-inch advantage in length over the hatchback gives it one obvious advantage - load space. Luggage capacity is an impressive 16cu ft - almost 50 percent more than a Golf. With the back seats folded, this rises to a cavernous 28cu ft - enough for three or four sets of golf clubs or anything else you may need to carry around. All versions get Volkswagen's 12-year anti-corrosion warranty and comprehensive 12-month overall cover and trim levels are much as you'd find on the company's other mainstream models - which means a range from S to SE and Sport. Standard features on all trim levels include air conditioning, anti-lock brakes, power assisted steering, twin airbags plus front seat side airbags, electric windows and door mirrors and central locking. The SE and Sport models add remote central locking, an automatic dimming rear view mirror, a windscreen wiper rain sensor, a trip computer and an alarm. They also get slightly larger, 16-inch wheels, provided in the form of racy alloys on the Sport, a trim level that also entitles you to grippy sports seats and a CD autochanger. If that's not enough, optional extras include a satellite navigation system and electrically adjustable seats with memory facility. In a bid to compete against more upmarket German rivals, Volkswagen has splattered the cabins of higher spec models like the V5 Sport with 'wooden' trim and optional leather. While the soft hide compliments the nicely sculpted sports seats in this well appointed version; some customers may find the shiny, fake wood less appealing. You pays your money. This apart, it's hard to imagine anyone finding much else to criticise about the interior. A wide screen area and low side windows make it bright and airy and the dash layout and controls from the Golf are functional and easy to use. The adjustable front seats and steering wheel mean drivers of all shapes and sizes can find a comfortable position. Only rear seat passengers may have cause to grumble. They tend to lose out on head and legroom due to the huge boot. There's no denying that the Bora is a well thought out and beautifully built car. Just the satisfying clunk of the door as it closes tells you that this is a piece of quality engineering. And, as with the Golf, you can rest assured that it has been built to meet all existing and future crash tests and incorporates all the latest safety features. 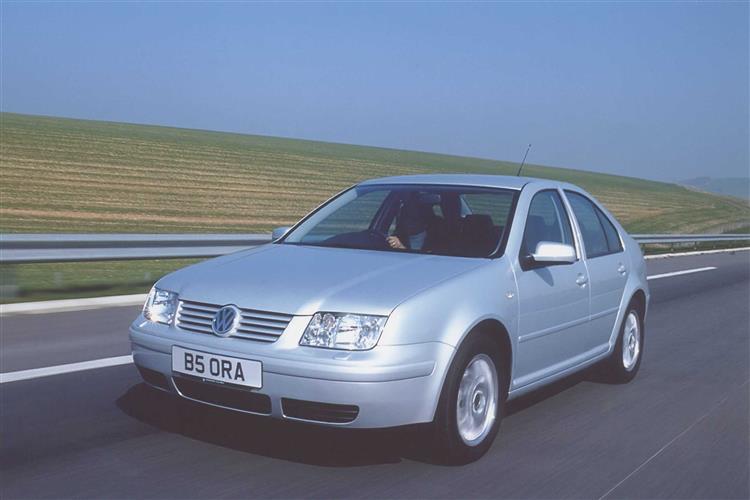