If anything is going to betray a person's lack of automotive knowledge, it's making tired old Skoda jokes. The Czech company, owned by VW, now produces some of the best-built small cars around, and their reputation has been enormously boosted by the 'Car of The Year' winning Fabia supermini. With used examples now starting to appear on the market, the Fabia is one of the most cost-effective ways to get a well-renowned latest-generation car on your driveway. If ever a used car came with a solid gold guarantee of customer satisfaction, the Skoda Fabia would be it.

Launched in March 2000 to instant acclaim, the Skoda Fabia cemented the Czech company's burgeoning reputation as a manufacturer of quality cars. Following the Felicia and Octavia models, the Fabia took Volkswagen's 'next-generation' Polo chassis and got to use it before any Volkswagen - an indication of the importance of Skoda within the VW Group empire. With five petrol engines and two diesel options to choose from and an ever-widening array of body styles, the Fabia appeals on a number of levels. The choice starts with the 1.0-litre Classic, which was only available for three months before being discontinued. A better bet is the 1.4-litre engine, available in 68bhp, 75bhp and sixteen valve 100bhp guises. For those who want a genuinely unruffled supermini, a 2.0-litre 16v engine appeared in November 2000, generating a healthy 155bhp. Two diesel options existed from launch, both based on the 1.9-litre engine that has seen service elsewhere in the VW Group. The 64bhp SDi unit will attract the traditional diesel buyer, but the turbocharged version, the 100bhp 1.9-litre TDi, is a viable alternative to a petrol model for those who enjoy driving. Three trim levels were available, Classic, Comfort and Elegance in ascending order of plushness. The estate version was introduced in spring 2001, and was soon followed by the announcement of a four-door saloon with a quite enormous boot. A 1.4-litre TDI engine with 75bhp was added to the line-up in 2003 as was the HTP 1.2-litre petrol engine which replaced the 1.0-litre at the base of the range. Towards the end of 2004, the Fabia received a facelift. Changes to the grille, spoiler and front fog lamps as well as the rear light clusters were made and the interior trim was 'modernised'. Prices remained largely unaltered but the Comfort trim level was re-named Ambiente. Then soon afterwards a Sport model was added as a budget sporty option slotting in below the vRS hot hatch. In the summer of 2005, the 1.4-litre engine in this Sport variant was downgraded to a 1.2 64bhp unit. The all-new Fabia arrived in the spring of 2007.

What You Getword count: 621

The Fabia is the longest car in its class and has the interior space efficiency to capitalise on those extra inches. Nor is any future rival likely to surpass it in this respect, for anything larger would stray into Golf, Astra and Focus family hatchback territory. Certainly buyers of such larger cars could consider this surprising little Skoda, for five can be seated in reasonable comfort, even if the rear centre occupant must make do with a lap belt rather than the three-point affair now offered by most rivals. This and the rather Spartan feel are the only real criticisms you could make of an interior that is otherwise a class above most other offerings in this sector. Only that of Fiat's Punto matches it for space - but that car doesn't feel as well screwed together as this one. Forget the plasticky feel of previous Skodas: the materials used are of the highest quality, even on the entry-level Classic models. Pricier Comfort (later Ambiente) and Elegance variants have lovely Audi-esque touches like a beautifully damped drawer beneath the radio. At this level, you also get lots of extra storage bins - something it would have been nice to see across the range. Mainstream Fabia buyers would probably also appreciate the beige interior trim package currently limited only to flagship Elegance customers, for the standard grey is a touch gloomy. But these are minor points. The boot's a useful shape (offering 1016 litres with the seats down), with 60/40 access through the split-folding rear bench and sturdy luggage hooks for securing awkward loads. Front side airbags are optional (as is a front passenger airbag on base models) and parents get two Isofix mounting points in the rear for the latest child seats. At the front, every Fabia gets rake and reach adjustment for the airbag-equipped steering wheel and the two plusher variants have driver's seat height adjustment. Which means that just about everyone should be able to get comfortable. Dirk van Braekel's chunky styling means a boxy shape that offers good headroom, even for those in the rear. And that in turn contributes to a general feeling of spaciousness. Electric front windows and air conditioning that usefully cools - or heats - the glovebox depending on your setting are standard from Comfort level upwards, but you have to stretch to Elegance trim for remote central locking and heated front seats. The Fabia has also spawned an estate variant which effectively replaces the Felicia load-lugger, and whilst not the largest estate car around, it certainly offers significant extra utility over the standard Fabia hatchback. The first thing that catches the eye is that rounded rump. Surely this has a catastrophic effect on load space when compared with the more perpendicular lines of something like a Volvo? Actually, no. Despite its soft angles, the Fabia estate can still manage a load space of 426 litres with the rear seats in place, which is more than apparently larger cars like the Alfa 156 Sportwagon or the Audi A4 Estate. Admittedly, this isn't saying much, as neither of these estates would claim to be the last word in tea-chest transportation, but with the rear seats folded an impressive 1,225 litres of room is freed up. Under the skin, the Fabia is the first car in the VW Group to use the new small car platform, so for the time being, users can thumb their noses at owners of lower-tech (yet smaller and more expensive) VW Polos and SEAT Ibizas. Given that crash tests are becoming ever more stringent, you can bet that this set-up is ultra-safety conscious: if I had to be in an accident in a supermini, I'd want to be in a Fabia. 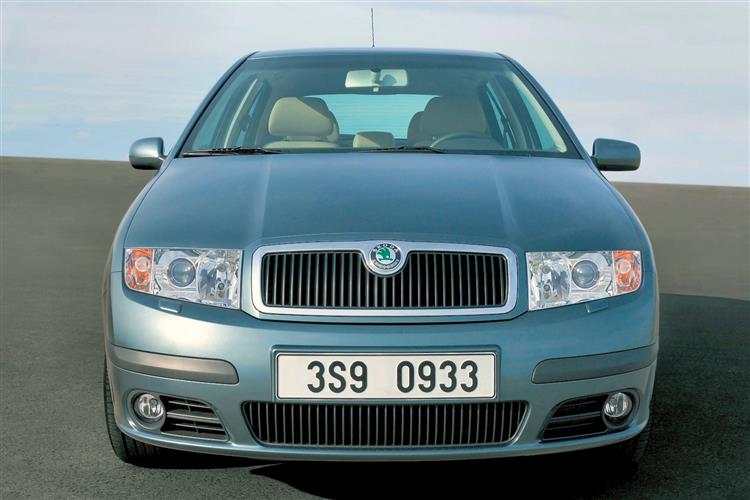