The E46 generation of 3 Series Convertibles were hugely significant cars for BMW. Although its predecessor, the E36, had a relatively easy run at the marketplace, the later cars had to contend with vastly improved rivals from Mercedes, Audi and Saab. As the recognised market leader, the BMW has thus far managed to stave off these more concerted attempts to dethrone it, but make no mistake - the 3 Series is top dog on merit. If you're in the market for a used BMW 3 Series Convertible there's a decent amount of choice facing you and no real lemons in the whole line up. What's more, these cars are usually well looked after so there are many more diamonds than dogs on the forecourts. The E46 3 Series Convertible is one of those cars where it's actually quite difficult to go wrong when buying used.

The fourth generation - or E46 - BMW 3 Series, with more rounded styling and slightly bulbous nose, arrived in Britain in time for S-plates in September 1998 but it wasn't another couple of years until drop top versions began to arrive in BMW dealerships. This suggests that the conversion was more than a simple buzz saw job and so it proved. The Convertible made its debut in May 2000 as a 323Ci, with the 330Ci following in June. The 323Ci was short-lived and was replaced by the more powerful 325Ci model in September 2000, at which point the 320Ci made its debut. March 2001 saw the arrival of the rocketship M3 Convertible with the sequential SMG gearbox being offered to M3 customers in July. In September 2001 the 318Ci slotted in at the opposite end of the line up. In a final and surprising throw of the dice for the 3-Series Convertible, BMW's 150bhp 2.0-litre diesel engine was added to the range during the latter stages of 2004. The next generation 3-Series Convertible arrived to replace this model early in 2007 complete with a folding hard-top roof.

Ever since BMW took over building its own drop-tops, the 3-series version has always looked sleek with the lid off and the current one continues the tradition perfectly. It's based on the Coupe version and shares that car's sheet metal as far back as the windscreen pillars. The Coupe itself, as BMW addicts will already know, does in fact share little more than door handles, indicator repeaters and badges with the saloon on which the whole 3 Series range is supposedly based. Take one look at the convertible and you appreciate the trouble BMW has gone to make the two-door models lower, wider and longer with a more steeply raked windscreen. As with the previous generation version, no fixed rollover hoop or bulky tonneau cover disturbs the lines of the E46 Convertible. However, should the standard automatic traction control and stability systems included as standard not be enough to prevent the car flipping over, strong steel beams instantly shoot out from behind the rear head restraints to protect the occupants' skulls. When folded, the hood sits neatly under a metal cover. Redesigned front seats, unique to the convertible, incorporate the seatbelts into their structure, rather than attaching them separately to the car body. This, says BMW, allows a better fit, easier access to the rear and stops the passenger belt flapping in the breeze when you're cruising alone, top down. Speaking of the top, this is another completely redesigned part of the car. The triple-layer hood itself has a padded lining to reduce wind noise and there's a proper glass rear window, with demister, in place of the old, easily scratched plastic pane that annoyed previous generation 3 Series Convertible owners.. BMW engineers have also come up with a sneaky hood stowage system that houses the whole convertible roof unit in a removable cartridge. With the roof up, you can fold the container out of the way where it extends into the boot to gain 30 per cent more space than in the old model. With the roof down, and the optional hardtop to hand (which gives you a stylish four-seat coupe and convertible in one) the folded soft top can be removed for winter stowage as a single unit. 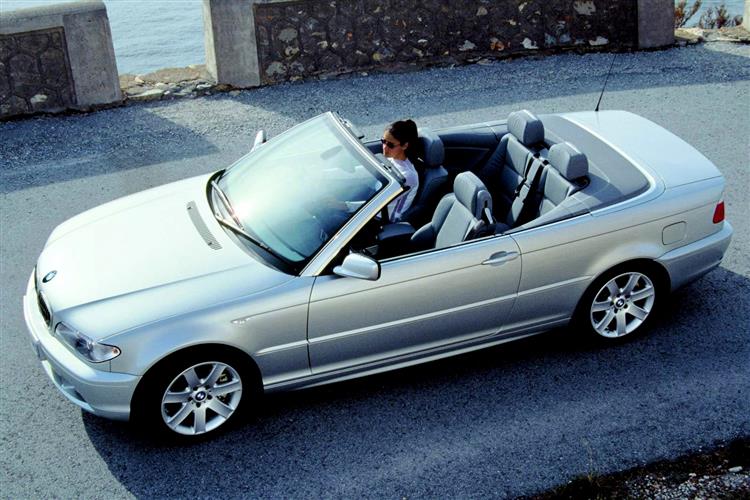