The S80 is something of a landmark vehicle for Volvo. For the first time in years, the Swedish company produced a range-topping saloon without an estate variant. Given that upper-range Volvos have traditionally sold better in estate form, that's a huge testament to their confidence in the S80 saloon's ability to stand on its own two feet. As a used buy Volvos have always given good value, but in a crowded corner of the market does the big S80 measure up?

The S80 received the best press reaction of any Volvo when it was launched in 1998. The motoring press gushed over its comfort, safety features and composed driving characteristics. Four petrol engines and one diesel were on offer, all with the same, shockingly curvaceous (for a Volvo) four-door saloon body. Two different versions of the 2.4-litre five-cylinder petrol engine were available, offering either 140bhp or a more purposeful 170bhp. A six-cylinder 2.9 was also offered, with a smooth 204bhp being deployed to the front wheels. The final six-cylinder engine was the 2.8 T6, a turbocharged engine pumping out a dizzying 272bhp. The sole diesel offering was the 2.5-litre 140bhp turbo diesel. Originally all models came either as standard or in luxurious SE trim. In 2000, Volvo felt the gulf between these two trim levels was too much and launched the 'stepping-stone' S designation for all models bar the T6 cars. Standard trim was dropped with price cuts introduced in September 2000, with 'S' now the entry trim level. An 'Executive' flagship model based on the 2.9 V6 was introduced for the 2001 model year, and was also joined by a D5 diesel based on the 2.4-litre five-cylinder engine architecture. This diesel was Volvo's first and proved little slower than the 2.4-litre petrol but returned an average of over 46mpg. In 2002 a 2.4T version with 200bhp was launched.

What You Getword count: 311

What you get with the S80 is a car that needs absolutely no apologies. Previous big Volvos had little charisma and were all too often the preserve of shooting set wannabes and harmless cranks, but the S80 is a car that appeals on many levels. It's billed as ''the world's safest car'' - and it's hard to argue. There are airbags everywhere; two at the front and two at the side, all of which have been programmed to activate less aggressively. Plus there's an inflatable curtain which covers the side windows and protects the occupant's head in a lateral impact. On top of all that and class leading side, front and rear impact protection, there's also WHIPS (Volvo's new 'whiplash protection system'). In the event of an impact, the whole seat moves backwards to absorb the initial impact and prevent the body being catapulted forwards. Simultaneously, the upper part of the seat moves up and forward to protect the neck and spine. The result should reduce the likelihood of whiplash injuries by as much as 50%. All of this trickery has created a longer wheelbase which, in turn, allows for a bigger passenger compartment. Indeed, take a long trip in an S80 after spending time in one of its German rivals and it isn't long before you appreciate the fact. Wherever you're sitting, there's more room for arms, legs and shoulders. You could almost be in a car from the next class up. Look around you and the detailing is superb. It isn't only that the car comes loaded with equipment - you'd probably expect that. No, it's the detail touches you remember. The front console-mounted telephone buttons, the telephone loudspeaker in the driver's headrest, the remotely operable lights that enable you to approach or leave the car in greater safety. There's a genuinely impressive depth of reasoning behind the S80. 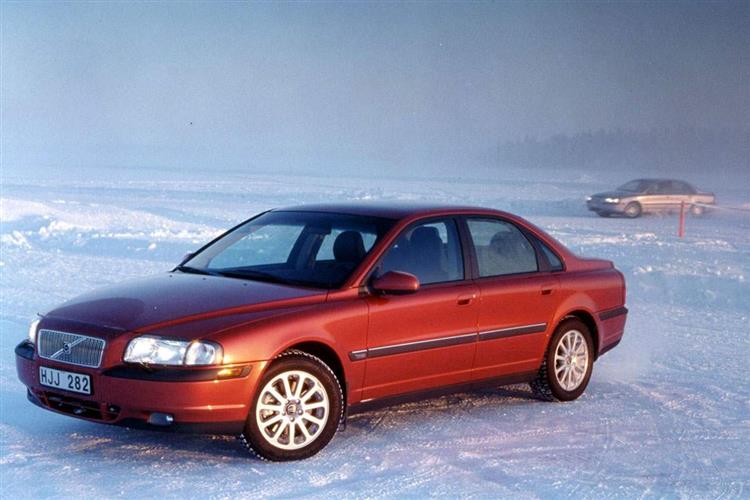