Amid all of the headlines commanded by newer and more raucous models in the Ferrari range, the 456 has for a number of years now, solidly campaigned as the marque's most expensive model. It would perhaps be wrong to label it the flagship model, because unlike the heady days of the seventies and eighties, it's probably the smaller V8 engined models that now act as the chief sporting and technical showcase for the Maranello concern. The Ferrari 456 has always been more reserved and sophisticated and the understated styling has dated impeccably. A used example costs less than you may expect and comes under the spotlight here.

The Ferrari 456Gt was launched in October 1993 to a rapturous press reaction. In keeping with the company's policy of making their cars more useable, the 456 reverted to the front engined, rear-wheel drive layout popularised by the Daytona of the early seventies. In fact many of the 456's exterior styling cues could be attributed to the Daytona. With a 2+2 body type and a thundering V12 engine rather than the flat 12 units that had preceded it in the 512TR, Testarossa and BB models, the 456Gt was a more practical proposition than its immediate forebears. The unloved 412 model which shared its 2+2 configuration was never a sporting drive, it's meagre residual value proving something of an embarrassment for Ferrari. It wasn't until the 1996 introduction of the 550 Maranello, which used the same engine but with a harder-edged setup that the true role of the 456 model was established. Instead of being an out and out flagship sports model, the 456 was instead best viewed as competition for upper range Bentleys and Aston Martins, capable of demolishing countries in hours but equally at home outside a gentleman's club or restaurant. The 456Gt and Gta automatic version were replaced in April 1998 by the 456M GT and GTA, the 'M' standing for 'modificato'. With a restyled front grille and its twin foglamps, an under-bumper rear spoiler, resculpted seats and a revised dashboard with different instruments and a new steering wheel, the 456M took an already beautiful shape and added a touch more aggression.

An encounter with a 456M is likely to elevate it somewhat. In return for £167,714, you get what in many esteemed critics eyes is the world's most beautiful car - past or present. Pininfarina was criticised for the shape: some say it's instantly forgettable, others that it's impact has been lessened by subsequent derivative, humbler designs from the studio such as the Peugeot 406 Coupe. Styling a car to be visually impressive is easy; creating it as a thing of beauty is much harder. Take the Ferrari F355 and 360 Modena for instance. The 360 is undoubtedly more dramatic, but the F355 is a more cohesive, beautiful design. The 456 is definitely from the F355 school of thought. Put one on a motorshow stand and everyone will stare at it. But away from the spotlight, on a crowded street or a busy highway, it fades discreetly into anonymity. With some care you can leave it in a supermarket car park or outside an Italian restaurant. Either way, you can do so with more peace of mind than you would enjoy with cars of half the price. What on earth is the point of owning the car of your dreams if you're afraid to take it anywhere? Or indeed, if you can't share it with more than one person? In original concept, this was supposed to be a true four-seater. Apparently, there were prototypes with more than two doors. What we've ended up with however, is a 2+2 with enough space behind the front seats to carry two children or a couple of reasonably accommodating adults - provided that the journey is relatively short. Even if you're going a bit further, you could persuade your rear seat passengers to join you. So sumptuous is the leather and so effective the air-conditioning system that it's easy to forget the lack of leg space. Thankfully, when Ferrari updated the car to modificato specification they didn't alter the awesome power output of the four-camshaft V12 5474cc engine, but improvements were introduced to make it both smoother and quieter. This is basically the same powerplant you'll also find in Ferrari's 550 Maranello - except that here it produces 'only' 436bhp instead of the sportier Maranello's 485bhp. 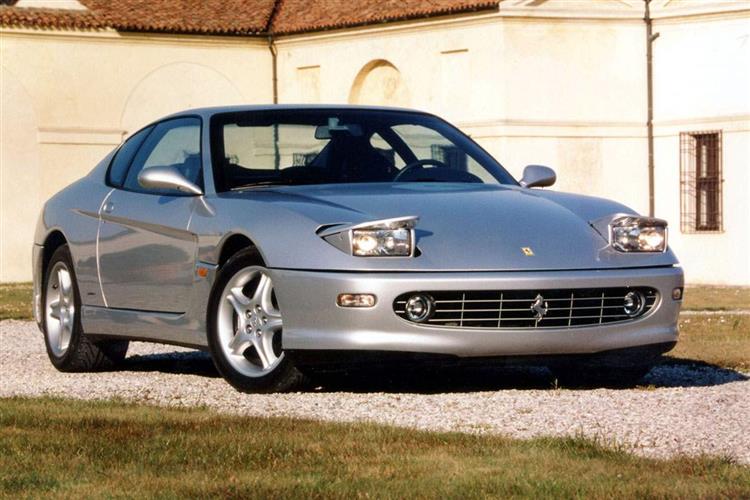