'VETTES IN PRACTICE (some text hidden)

The Chevrolet Corvette doesn't need a great deal of introduction. "America's Sports Car" has been available in one guise or another since the fifties, but it was not until the launch of the C5 series in 1997 that the Corvette received the respect of European drivers. When General Motors started officially importing the Corvette into the UK in 1999, it was seen as a performance car bargain. But can a used car represent an even better way of getting more bang for your buck?

Launched in the UK in 1998 after receiving rave reviews in the USA, the Chevrolet Corvette C5 came as a welcome surprise to many expecting yet another bloated barge. Yes, it was still big, heavy, made of plastic and boasted engine technology that most manufacturers had consigned to their museums, but somehow the Corvette made it all seem like common sense. With fuel consumption no worse than the latest generation four-wheel drive rally replicas and performance to worry Ferrari drivers, the Corvette combined this with styling that was sleek where its predecessor was crass and a list price of just £36,525 upon launch. A bargain, as long as you were prepared to sit on the wrong side, as all Corvettes were left hand drive. Available as either a targa-roofed coupe or a full convertible, the Corvette retained many of the styling cues from previous generation cars such as the pop-up headlights, the four round tail lights, the long bonnet and the short stern section. With a Cd of only 0.29, stylist John Cafaro has, to most eyes, done an excellent job. The engine was the familiar 5.7-litre Chevrolet Small Block V8, complete with pushrods actuating the two valves per cylinder, which sounds more like something from the seventies, but which had benefited from a number of improvements. The whole engine block and cylinder head were now made of aluminium, and the inlet manifolds were constructed of sophisticated composite materials, lowering the weight of what was once a very heavy engine. Whilst weight may have been slashed, power was boosted up to a rippling 344bhp, mated to either a four-speed automatic or a six-speed manual gearbox. At the start of 1999, the Corvette received a series of small improvements. Technological achievements were at the forefront, with a Head Up Display projecting information onto the windscreen and an Active Handling Package (stability control) to help drivers keep their Corvettes in one piece. The Twilight Sentinel system was fitted as standard, automatically switching on the headlights at dusk or in poor weather conditions, and an electrically adjustable steering column was added to the options list. A three-year/60,000 mile warranty package was also introduced, giving Corvette buyers additional peace of mind. For 2001 Chevrolet offered two new colours, Speedway White and Quiksilver, electrochromic mirrors, chrome tipped exhausts and a slimline multi-function key fob. More importantly, the engine management system was fettled to give a wider range of torque right across the rev range. Beefed-up anti-roll bars with optional "touring/sport/performance" switchable suspension give more feedback to the driver, a criticism of the earlier C5 models. Official UK imports finished in early 2002.

With the steering wheel on the right side and a bigger dealer network, Porsche, BMW and even Ferrari would have cause to worry about their UK revenue streams. As it is, the Corvette is always going to be something of a minority interest. Having said that, there are some compelling reasons for taking the plunge. Aside from that sledgehammer performance, the Corvette is now a genuinely beautiful car in a way, as opposed to merely handsome rivals such as the BMW M3 and the Porsche Boxster. Only British sports cars like the TVR Tuscan and Noble M12 GTO offer a similar visual impact, yet neither has that mass-produced feel to them. For some buyers this will be a perfect reason not to buy a 'Vette, whilst others will feel reassured by its factory fit and finish. Equipment levels are pretty lavish, with air conditioning, twin airbags, ABS, a full-house stereo, a six-way power driver's seat, electric windows and central locking all fitted as standard. The Corvette's convertible roof, however, is manually operated (astonishingly there's no power option) and folds neatly away under its own protective panel. This has a noticeable payoff in the amount of luggage space you get. Even with the roof down the convertible has 300 litres of room in the boot - enough for two full-sized golf bags. This is partly thanks to the absence of a spare wheel, thanks to the use of Extended Mobility Tyres. Even completely flat, these can run at normal speed for up to 200 miles. 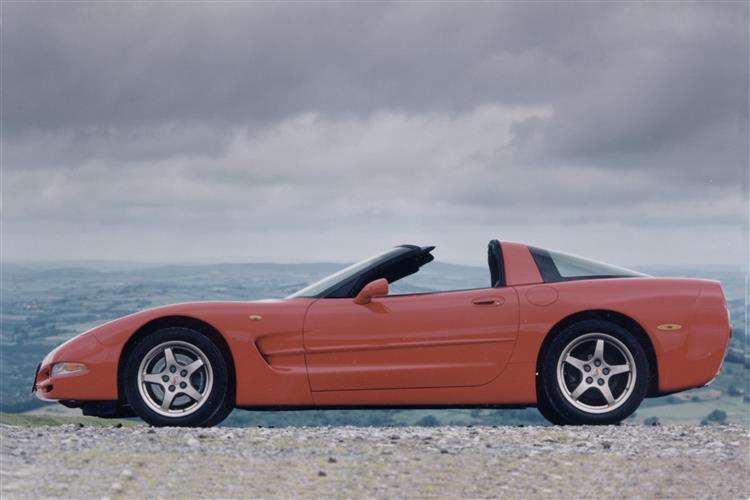