Few cars polarise opinion as much as the BMW M coupe. Its admirers would argue that it has unparalleled visual impact, whilst its critics would point out that same could be said of a three legged man with his mouth on the wrong way up. Whether you find it beautiful or freakishly ugly, the M coupe doesn't create too much argument when it comes to the driving experience. As one of the finest BMW's of recent years, it could well be earmarked for future classic status. With used examples now looking a bit more affordable, can you resist being absolutely corrupted by M-Power?

BMW has traditionally been reliant on its M-Power division based in Garching, north of Munich to add the necessary sporting spice to its range. With some legendary vehicles, such as the M1, early M3 and M5 on its CV, the Garching plant found the cupboard surprisingly bare in 1998. With no M5 model on the market and the M-built 850CSi similarly deceased, engine production concentrated on the 3.2-litre unit destined for the ageing M3 and the new Z3 based M roadster being assembled at BMW's Spartanburg plant in South Carolina. Neither of these two models were welcomed by BMW enthusiasts as 'proper' M-cars. The M3 was compared unfavourably with the old shape E30 M3 and denigrated by the motoring press as little more than a CSi, BMW's traditional designation for a sports touring coupe. The M roadster was viewed as having too much power for the slightly wobbly open-top body to handle with any conviction; the Z3 brand struggling to escape from its early 1.9-litre 'hairdresser' origins. The M coupe's development history is interesting. A team of hardcore driving enthusiasts at BMW's Research and Development Centre felt that the M roadster wasn't extreme enough for their liking. Working after hours, they stripped the wings off a Z3 roadster and sculpted a coupe body. It's tempting to imagine that they neglected to adequately ventilate the studio and lost all power of reason due to the aerosol effects of the sculpting foam, but that's not the case. The design they came up with was shocking, challenging and quite unlike anything BMW had ever produced. The M coupe redressed a lot of the failings of the roadster. Although mechanically identical, the fixed roof served to stiffen the chassis, and the almost wilfully ugly looks ensured that the M coupe wouldn't be bought by extravagantly-coiffured posers. Introduced in September 1998, the hard top car found immediate favour with traditional BMW M-buyers, outselling the identically-priced M roadster by nearly three to one. In spring 2001 the M coupe and M roadster received the engine from the latest (and some would say greatest) M3, although power has been knocked back slightly to preserve the M3's traditional hegemony. Now packing a thunderous 325bhp, new standard features for the updated and M coupe include DSC III (Dynamic Stability Control III), chrome shadow finish alloy wheels and grey instrument dials with a light system on the rev counter to suggest reduced maximum engine speeds before the optimum oil temperature is reached. BMW's Tyre Defect Indicator system is also fitted as standard. Two new colours, Phoenix Yellow and Laguna Seca Blue have been introduced and the M coupe looks set to carry on being the established choice for those who like their M cars just that little bit wild.

If one were to design a credible and desirable coupe, the Z3 body would be a great place not to start. In its early incarnation few liked the mismatch between the aggressive front and timid rear end. The M coupe remedied this. Huge wheel arches sprout from its flanks, arcing up to a short roof that looks over that long bonnet. No, it doesn't sit easily on the eye, and it definitely works better in some colours than others, but it's certainly striking. Big seventeen-inch alloy wheels lurk within the arches, shod with monstrous low-profile tyres. Inside, the story is similar. BMWs are usually renowned for their design restraint and low-key interiors. Not so the M coupe. Trimmed in a variety of colour schemes which are extrovert to say the least, the M coupe doesn't feel old-money BMW. Chrome ringed dials dot the fascia and the overall effect is of exuberant gaudiness. The only discreet thing about the car is the tiny 'M coupe' legend picked out in the speedometer dial, lest you forget why passers-by are walking into lamp-posts. The M coupe is a strict two-seater, but with more luggage capacity than the roadster upon which it's based. Despite this, it's a tight squeeze once inside. Drivers over six feet should not specify the sunroof, robbing two inches of headroom as it does. Despite being fully trimmed in leather, the narrow seats grip the body well and the chunky leather-trimmed wheel feels purposeful. 'Old-school' BMW design cues such as the 'organ-stop' light switch remain, as does the peerless instrument clarity. The huge rear-view mirror impedes forward visibility in left-hand corners however, and another demerit point is for the lack of the M3's six-speed gearbox. Apparently this wouldn't fit in the Z3-based body shell. Standard equipment is predictably good and includes the 'M' aerodynamic mirrors, with probably the noisiest electric adjustment of any production car. There's also ABS, twin airbags a BMW RDS stereo system, central locking, heated seats and transponder immobiliser. The M coupe's standards of fit and finish fall slightly short of what we have come to expect from German-built BMWs, with some of the plastics not bearing that indestructible feel. Owners attest to the fact that whilst the M-coupe's reliability is good, the car is not immune to the odd squeak and rattle. Later models have tighter quality control. 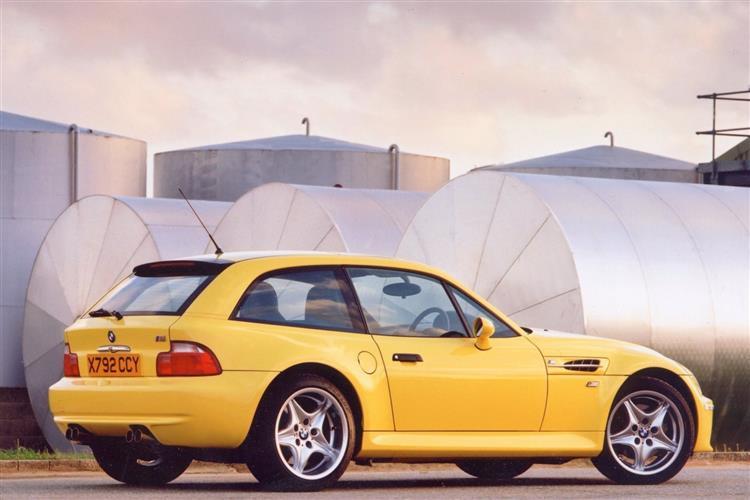