If asked what Britain's favourite coupe has been in the years 1996-2001, what would you plump for? The Ford Puma would have to be a strong candidate, as would the Hyundai Coupe. Vauxhall Calibra and Ford Probe sales tailed off while the Ford Cougar never really hit the ground running. That headline across the top of this article may well have scotched any attempt at building surprise, but it was the Renault Megane Coupe, an unprepossessing little coupe that you folk just can't get enough of. With good reason too. In a changing car market Renault shrewdly anticipated the way the wind was blowing and developed a range of attractive, inexpensive and insurance-friendly sporty models that didn't break down or become a prime target for villains. As such, the Megane Coupe is one of the best used buys in the sector, just so long as exclusivity and excitement aren't at the very top of your wish list.

The Renault Megane Coupe arrived in April 1996 with a choice of 1.6, 2.0 or 2.0 16v engines. An instant hit, the Coupe looked like a three-door hatch but was in fact a two-door bodyshell with a somewhat minuscule boot. Its easy-going looks and mild appeal found favour with a public wearied by the demands of rapacious insurers - or so it seemed. The 2.0-litre 16v version actually had a tweaked version of the engine that powered the rollerskate Clio Williams model and was capable of some stiff performance figures, but never attracted the boy racer brigade, hence the distinctly reasonable Group 13 insurance rating. In 1999, Renault revised the Megane Coupe with a more aggressive styling job and a new range of engines. The mainstream models got 95bhp 1.4 and 110bhp 1.6-litre 16v engines, whilst the flagship variants could be ordered with a revolutionary 2.0 16v direct injection petrol engine developing no less than 140bhp. Known as the 2.0 'IDE', it was the first powerplant of its kind to be offered by a European car maker and took Renault Sport two years to perfect. As expected, buyers couldn't get enough of it. In 2001 Renault had a tinker with the trim levels, renaming them Expression, Dynamique and Privilege. Subtle changes were also made to the interior. This model did good service for Renault until they introduced the radical new Megane series in 2003 whereupon it was honourably put out to grass.

The Megane Coupe really is a model in its own right - not simply a three-door version of the Megane hatchback. It's not even a hatchback for goodness sake - more's the pity some might say. I prefer to side with those who appreciate the extra body rigidity you get without that gaping hatch hole at the back. Make no mistake, this is a car for serious drivers - but it's also been seriously marketed as well. Instead of opting for either the junior coupe sector (a la Ford Puma) or the medium-sized coupe market (a la Toyota Celica), Renault has attempted to target both with the range on offer. The sales figures suggest some merit in this approach. If you've no objection to decent quality plastic, you should have no problems with the softly sculptured dash layout with its new easy-to-read sports instrument dials. There's a much better unique-fit stereo on second-generation cars with steering wheel-mounted remote controls. Renault wishfully bills the car as a "true four seater", a statement which seems to me to reveal too many long marketing lunches in Paris. The truth is that the Megane has no more (but certainly no less) room than any of its comparable rivals - the tiny Vauxhall Tigra apart. In other words, carry children or adults to the pub on the back seat by all means, but forget it for anything else. As I've said, the designers have opted for a boot rather than the fifth door those sloping rear lines might lead you to expect. This brings with it predictable drawbacks in luggage capacity which aren't helped by the luggage aperture being rather small. Can you nit-pick? Of course you can. It could be quieter and visibility could be better. These are trivialities, however. The bottom line is that La Regie has come up with one cracking car, a fact reflected by its sales figures. 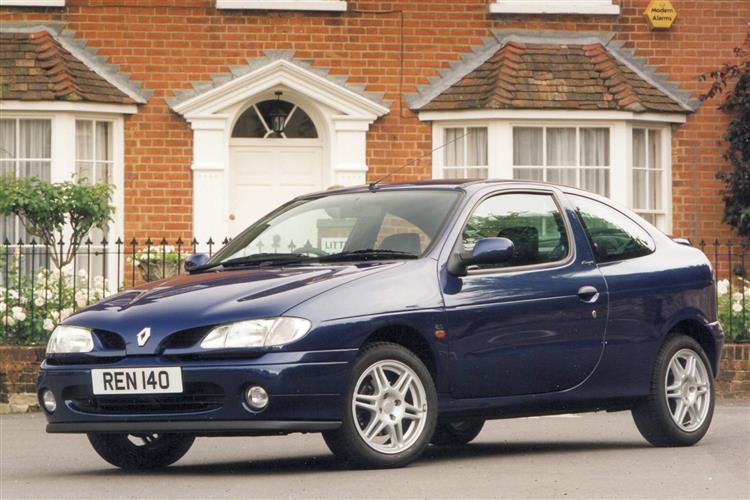