YOUR PARTNER IN SLIME (some text hidden)

It's a tribute, both to Nissan's dealer network and the company's marketing skills, that the Terrano II has done so well. The product itself was virtually identical to Ford's Maverick, both cars being developed in the early Nineties to plug what was then a growing demand for affordable family sized off roaders. While the Maverick flopped, the Terrano II made useful profits for Nissan, selling in much greater numbers despite the smaller dealer network. It still suffers from an image problem however. Not even the most optimistic of Nissan dealers can pretend that this is any kind of Range Rover. The sensible ones concentrate on its less obvious virtues; rugged build, surprisingly good off road ability and proven reliability. These attributes make it a good prospect as a second-hand buy so it's icing on the cake that used prices are reasonably attractive.

The Terrano II was introduced in June 1993 as a joint venture with Ford. To be more accurate, Nissan did all the work and Ford put up the cash. The feel of the car was, not surprisingly, very Japanese. In fact, most of the interior fittings came straight from the Nissan Primera. Right from the beginning, the Terrano II outsold its Ford Maverick cousin handsomely due to sharper pricing and a superior warranty. Both cars shared the same engines - either a 122bhp 2.4-litre petrol unit or a noisy and sluggish 100bhp 2.7-litre turbo diesel. There was the option of either three or five-door body styles (though, until the 1996 facelift, three-door customers could specify only diesel power). You could have various trim levels; SLX and SE on the three-door and LX, SLX, SGX and SE on the five-door. Seeker, Outlander and Highlander special editions followed in 1995 and 1996. Substantially revised versions arrived in June 1996. You couldn't miss the major change - an all-new front end, designed by Nissan's European Technology Centre at Cranfield, with a restyled grille and integrated headlamps and fog lamps. There was also a new bumper and wider wheel arch extensions. Under the bonnet, the 2.7-litre diesel engine most Terrano customers preferred delivered more power and torque. This was achieved by the adding an intercooler and a new electronic fuel injection control system. The result was 125bhp, a massive 25% increase in urge, with an equal improvement in pulling power. Nor had the 2.4-litre petrol engine been forgotten; it was now more refined with lower emissions. There was also a new 'intelligent' dual-purpose anti-lock braking system. It operated in both two and four-wheel drive and modified the braking response depending on whether the vehicle was being driven on or off-road. There was also a new security system. Trim levels were now SR and SE on the three-door and S, SR and SE on the five-door. An Xtreme three-door special edition was offered in May 1997 and joined the range as a model in its own right for the '98 model year. January 2000 saw another substantial facelift. The front grille and bumper were restyled and there were new dual-optic headlamps and revised rear lamp clusters plus a high-level stop lamp, larger door mirrors, redesigned side steps and bigger 16'' wheels. Inside, there was a new centre console, new dials set into a two-tone fascia, an outside temperature gauge, cup holders, a back door stowage net and redesigned seats. Nissan also introduced water-repellent glass and Electronic Brake Distribution which stopped the Terrano II between 5.6 and 8.2m shorter than its predecessor. The revised ABS system now cut out below 8kmh to improve braking in deep snow or sand. The Terrano 3.0Di was introduced in Spring 2002, lifting its 154bhp engine from the mighty Patrol. The Terrano was on its way out by spring 2004 but in one last throw of the dice Nissan reduced the range to include only the up-spec SE and SVE models. Prices were reduced and the tired looking wood interiors were ditched in favour of more contemporary plastic.

A decent family workhorse. The interior is just like that of any family hatchback. The trim quality is well up to standard and everything falls easily to hand. All major equipment is in evidence; second generation Terrano IIs come with tilt adjustable wheel and power steering as standard while the plusher models add electric windows, central locking and an electric sunroof. Some also have air conditioning. However, there's little of the class you'd expect in an up-market family saloon. Hard plastic is everywhere. Still, it's practical. So is the reliability; Terrano IIs have a reputation for not breaking down - something many Vauxhall Frontera owners would kill for. 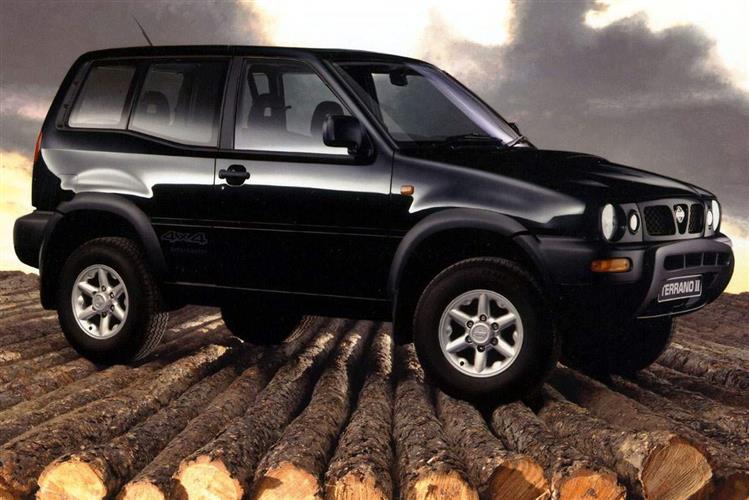