To put it mildly, Ford's Scorpio was one of the more unusual executive offerings of recent years. Its styling couldn't have been more different from the conservative looks of the car it replaced, the dear old Granada. Certainly, it took both buyers and competitors in the boardroom sector by surprise. Whether this 'blend for the Nineties' was successful depends on who you speak to. Ford executives always maintained that production was sold out for months ahead, but were always unwilling to specify what the production level actually was. Below what Ford of Europe would have liked it to be, certainly. But that market uncertainty is good news for today's second-hand buyer. Regardless of what you think of the looks, the Scorpio drives brilliantly and prices are tempting.

The Scorpio was introduced in October 1994, replacing the much-loved Granada as Ford's executive flagship. Its unusual looks caused an instant furore not helped by the fact that no one at Ford admitted overall responsibility for creating them. Don't be confused, by the way, by the new look Scorpio and the Scorpio level of specification available for top-line versions of the previous Granada. Early models were offered with a choice of four main petrol powerplants - a 2.0-litre 'four' - offered in either 8v or 16v forms - and both 12v and 24v versions of the 2.9-litre V6. There was also a 2.5-litre turbo diesel. Executive, Ghia and Ultima trim levels were all offered. In August 1996, the handling was improved and the range rationalised. Trim levels were now known as Ghia, Ghia X and Ultima but more significantly, a new 2.3-litre 16v engine (developed, like the 24v V6, by Cosworth) added to the range. Ford fiercely defended those unusual looks all through the car's life but bowed to public pressure in early 1998 by reducing the amount of chrome around the bodywork. You'll notice these rare cars by their body-coloured front grille surrounds, darkened headlights and the saloon's restyled tail lights. The Scorpio was gradually phased out during the second half of 1998.

What You Getword count: 65

A rather dowdy image, but a lot of car. Basically, it drives better than it looks. Scorpios always cruised well on the motorway and with the chassis improvements introduced in 1996, they also handled the twisty stuff pretty well too. The estate version is huge - but doesn't have the option of a third row of seats. Equipment levels are high and maintenance is cheap. 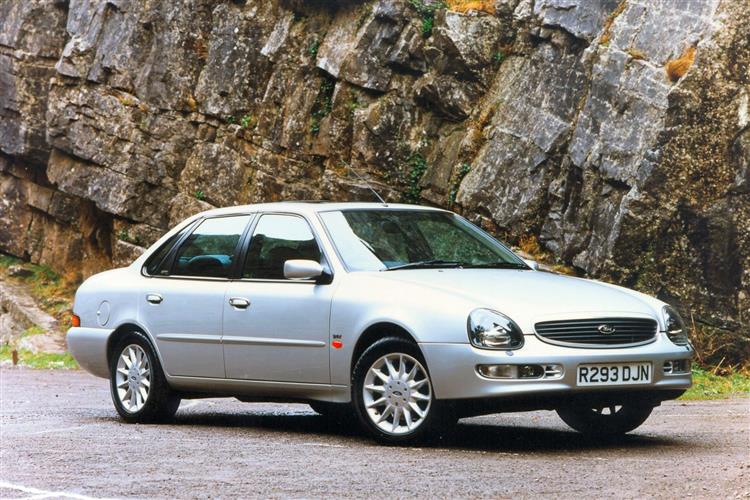