Although the Mk IV Golf didn't enjoy a great reputation as a sporting drive, look away from the GTi badge and there were some worthy candidates. The V5 models are well worth seeking out and the V6 4MOTION cars make fine high-speed cruisers. If you really want a Golf laden with a ton of attitude however, you owe it to yourself to track down a used Golf R32. It's a Golf like no other.

Although the V5 had been campaigning since 1998, Volkswagen were in danger of being embarrassed for a serious performance Golf. The launch of a whole slew of superhatches with over 200bhp was the catalyst for the development of the Golf R32 and when it arrived, it became the one that all others were judged against. Whilst the Ford RS Focus and the Alfa Romeo 147 GTA attempted to put their power down through the front wheels, Volkswagen sensibly decided that 232bhp was a little too much to sensibly deploy through the front boots alone and ensured the R32 was based around an all-wheel drive system from the word go. With both three and five-door models available, the Golf R32 offers subtle speed and a lot more driver appeal than you may give it credit for. Retired in mid 2004 as preparations were made for the Volkswagen Golf Mk V, this model has the potential to become an underrated but very smart investment.

What You Getword count: 279

There's a lot more to the R32 than serious horsepower, but the age-old formula of big engine in a small(ish) car still serves up the thrills. The 3.2-litre V6 engine fitted to the R32 is a massively revised version of the perennial 2.8-litre V6 (nee VR6) unit that powered upspec MK4 Golfs like the V6 4Motion. Bored and stroked to increase capacity, it was also destined for Volkswagen's own Touareg 4x4 and Porsche's Cayenne off roader as well as Volkswagen's Phaeton luxury cruiser. With a variable intake, a specialist intake manifold, a revised cylinder head design and exhaust camshaft adjustment, the R32's powerplant is up a full 33bhp on the 2.8-litre lump that spawned it. The interior has been livened up from the usual coalhole Golf cabin. Ball burnished aluminium trim features on the pedal set, around the major instruments and inlaid into the dash and doors. There's also a large clutch footrest which, like the rest of the pedals, is inlaid with rubber 'R' logos. A monogrammed steering wheel, manually adjustable heated bucket seats and a choice of either leather or Alcantara trim in either grey or black are also standard. Buyers even get a special R32 umbrella that resides in the glovebox. The exterior changes include a triple gaping maw of a front air intake, a lower ride height, 18-inch alloy wheels, unique front bumpers and side sills and the silver R32 badging on prow and posterior. Only one colour was available - Deep Blue Pearl metallic, blue intended to be the R motif. One advantage the R32 had over certain sporting rivals was the availability of a five-door body to complement the more popular three-door style. 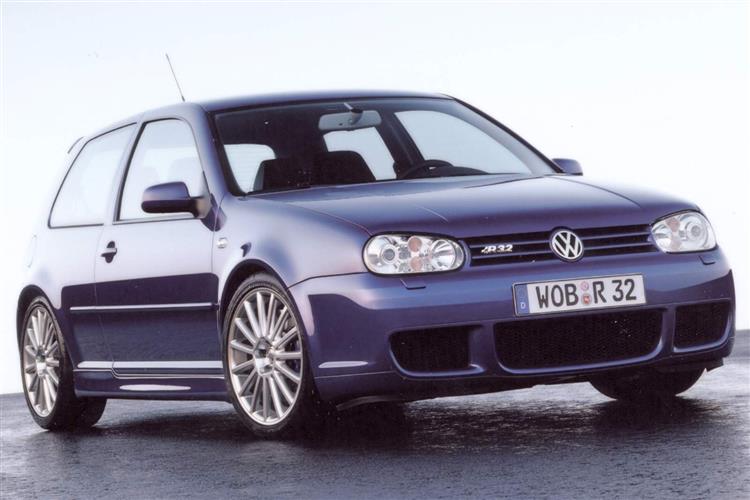